In today's tight job market, employers must focus on how to attract and keep top talent. Giving away stacks of money may not always be the best incentive 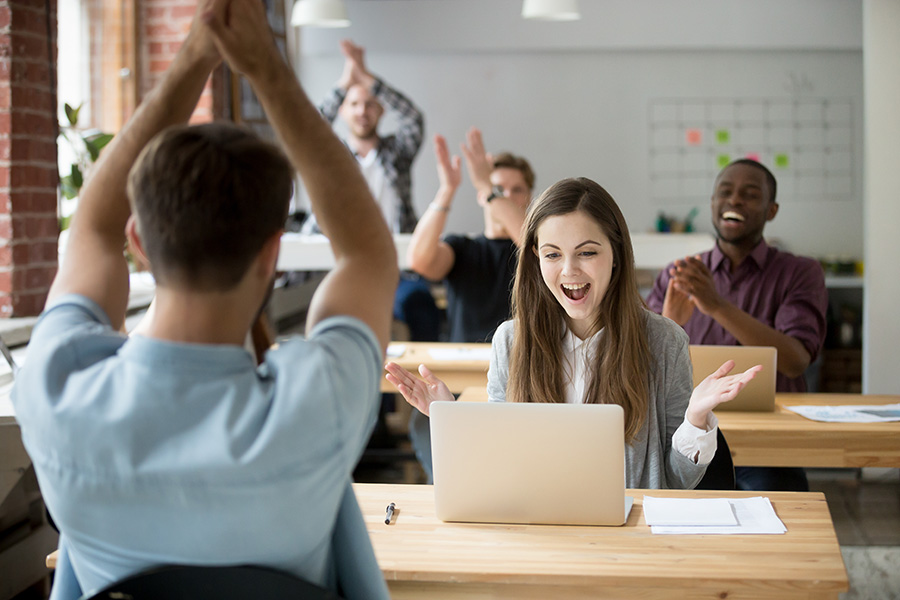 With unemployment at near historic lows in the United States, employers report that their single greatest challenge is recruiting and retaining talent. The answer for many companies is to throw money at the problem: Bonuses, incentive pay, and out-of-cycle salary increases are often seen as motivators that will entice greater effort and loyalty out of workers.

Turns out, using cash as a carrot isn’t always the best answer, according to new research by Harvard Business School Assistant Professor Ashley V. Whillans. More than 80 percent of American employees say they do not feel recognized or rewarded, despite the fact that US companies are spending more than a fifth of their budgets on wages.

What employees crave even more is to feel that their managers appreciate them and aren’t afraid to show it, not only in paycheck terms, but in other ways such as flexible work-at-home schedules, gift cards for pulling off impressive projects, or even just by saying “thank you” for a job well done.

“Cash matters in people’s lives, but it’s not all that matters,” says Whillans, who researches what makes people happy. “What really matters in the workplace is helping employees feel appreciated.”

Whillans co-wrote a recent article in Compensation & Benefits Review, “Winning the War for Talent: Modern Motivational Methods for Attracting and Retaining Employees,” with Anais Thibault-Landry of the Université du Québec à Montréal and Allan Schweyer of the Incentive Research Foundation.

Rewards that signal to employees that they did a good job and that their manager cares about them will encourage employees to want to work even harder, the research shows. “In a lot of organizations, there are no recognition programs for employees whatsoever, so employers need to catch up,” Whillans says.

Companies with strong recognition programs enjoy increased productivity, lower job turnover, and greater returns on investment than other companies in the same industries.

Whillans provides nine tips for business leaders on how best to reward their workers in ways that will bring them greater job satisfaction and motivate them to work harder.

When recruiting, emphasize benefits
Talking up a job’s perks, such as flexible work schedules and skill training, can give companies a recruiting edge. A 2018 study that Whillans and her team conducted of more than 92,000 job ads found that the more benefits an employer described, the higher the application rates. Plus, when employers described benefits in detail, such as generous family leave policies, they pulled in more applications than firms that paid significantly more.

Candidates said the “softer” rewards described in the job ads gave them the impression the company cared about its employees and was more considerate with helping workers find a healthy work-life balance—and that mattered more to them than the extra money.

Cash can motivate workers—in some types of work
Cash rewards are best suited as a motivator for work that is measured quantitatively, Whillans says. Many studies of the service and sales industries show that cash rewards lead to increased sales and improved customer service. In the manufacturing sector, cash awards increase daily productivity levels.

But money is less meaningful as a motivator in the complex creative jobs that make up most work in our modern knowledge-based society. “With most of today’s employees, you’re trying to help instill intrinsic motivation, so they feel motivated to put in more effort out of enjoyment for what they do and appreciation for their jobs, rather than feeling extrinsically motivated by cash alone.”

If you give cash, include a meaningful note
For many employees, particularly younger generations, a job is not just a paycheck; people seek meaning in their work. Giving cash alone can feel like an empty gesture or a mere financial transaction and may not act as a strong motivator to work hard, Whillans says. It’s best to avoid merely adding a cash bonus to a worker’s paycheck; a separate bonus check stands out more as a recognition of their work. And managers should also include a sincere handwritten note explaining why the employee deserved the bonus.

“If you can find a way to imbue meaning beyond the zeros in the cash reward,” says Whillans, “that same reward will go further.”

Reconsider performance incentives
Many companies attempt to motivate employees with money and prizes as incentives for future work. Decades of research does confirm that financial incentives can boost effort and performance. But there’s a downside; when an employee’s pay is contingent on performance, they can become obsessed with money—specifically, with earning more of it.

What often works better as an incentive is to turn around the timing of the reward, handing it out immediately after an employee excels at a particular task, rather than dangling it beforehand.

“In this way, you can use timing to your advantage,” Whillans says. “And be very clear about what the worker did and why they’re receiving the reward to reinforce good behavior—because you’re hoping the worker will repeat that behavior.”

Consider thoughtful gifts instead of cash
Sometimes cash isn’t king. A 2017 study of 600 salespeople found that when a mixed cash and prize reward program was replaced with an equivalent value all-cash package, employee effort dropped dramatically, leading to a 4.36 percent decrease in sales that cost the company millions in lost revenue, Whillans’s article says. The firm may have inadvertently demotivated salespeople who preferred prizes or discouraged workers who liked having a choice.

People may prefer non-cash gifts because they often spend cash bonuses on basic necessities like paying rent or buying groceries, which are less memorable and enjoyable transactions than luxurious prizes like electronics or trips. It’s even better if a gift feels personalized. A manager could give an employee who enjoys fitness activities a gift card to a store that sells workout clothes, while giving another worker who is a big Red Sox fan tickets to an upcoming game.

Another side benefit to prizes: workplace buzz. “People feel awkward talking about money, so they won’t talk about the $2,000 bonus they received. But if you reward someone with a nice dinner or trip, they will talk about it with their co-workers, and that can motivate everyone,” Whillans says. “Plus, that trip or dinner is more memorable and emotionally satisfying to them than just receiving cash, so it can act as a stronger motivator.”

Give the gift of time—and other intangible perks
A Glassdoor survey Whillans and her team conducted with 115,000 employees found that providing intangible non-cash benefits, like flexible work options or the ability to choose assignments, led to much stronger job satisfaction than straightforward cash rewards.

“If you allow an employee to work at home, you help employees feel like you trust them to get their work done where they want to get it done,” Whillans says. “That is enormously satisfying to them—and it motivates them to work even harder.”

Also, research shows that employees who take time off are less stressed and more engaged, more creative, and more productive. Give the gift of time, not just through generous vacation policies, but in other ways. For example, figure out flexible work schedules so employees spend less time jammed in traffic. Allow work-travelers to book direct flights—even if they cost a little more than indirect trips.

Encourage employees to reward one another
Companies can build recognition into their business practices by creating peer-to-peer recognition programs in which employees are provided monthly reward points that they can give away to colleagues for work-related wins. Employees who earn a certain number of points can redeem them for various perks, such as a restaurant gift card or an extra personal day.

This is not expensive for a company to do and makes the act of appreciation in the workplace habitual and easy, Whillans says. “It also builds social connections in a workplace, which helps people feel more fulfilled at work.”

Make the recognition public
If employees are receiving a $500 bonus, hold a workplace event to hand out checks, and invite the employees’ peers. Perhaps add a certificate of appreciation along with the check.

“People are more likely to contribute posts on Wikipedia when they receive a public certificate of recognition,” Whillans says. “If you can create a social experience around the reward, it becomes more eventful and something an employee will remember.”

Sometimes a simple thank you is enough
Among the happiest employees, 95 percent say that their managers are good at providing positive feedback, Whillans says. In fact, a simple, heartfelt “thank you” from a manager is often enough for employees to feel like their contributions are valued and will motivate them to try harder. To be most effective, the praise should be specific, highlighting the worker’s unique contributions. It’s a tactic that’s wildly effective, yet significantly underused in the workplace.

“You don’t have to express gratitude only for things that help the company turn a profit. It could be as simple as saying ‘thank you’ for an email that allowed a project to go more smoothly,” she says.

Why rewarding employees works
Whillans says these types of rewards work because they tap into three strong psychological needs: Employees long for autonomy, with the freedom to choose how to do their work; they want to appear competent, armed with the skills needed to perform; and they want to feel a sense of belonging by socially connecting with colleagues in a meaningful way.

When these needs are satisfied, employees feel more motivated, engaged, and committed to their workplace—and they report fewer intentions of leaving their jobs, Whillans says.

Companies shouldn’t read the research results to mean that money is meaningless to employees. The team’s findings are contingent on the understanding that employees are paid competitive, fair salaries. Because, let’s be honest: If an employee has worked overtime for weeks on an important project, a mere “thank you” may feel hollow. Managers should try a variety of rewards and measure which ones appeal to employees and motivate them the most.

Praising employees can be a stumbling block for leaders who mistakenly believe being harsh produces stronger results or who worry they will appear soft and won’t be taken seriously. So managers should be trained in how to regularly show appreciation, Whillans says.

“Many managers feel awkward showing gratitude and shy away from it,” she says. “That’s why organizations need to make a push to help managers with this. It can make all the difference in whether a talented worker stays or goes.”