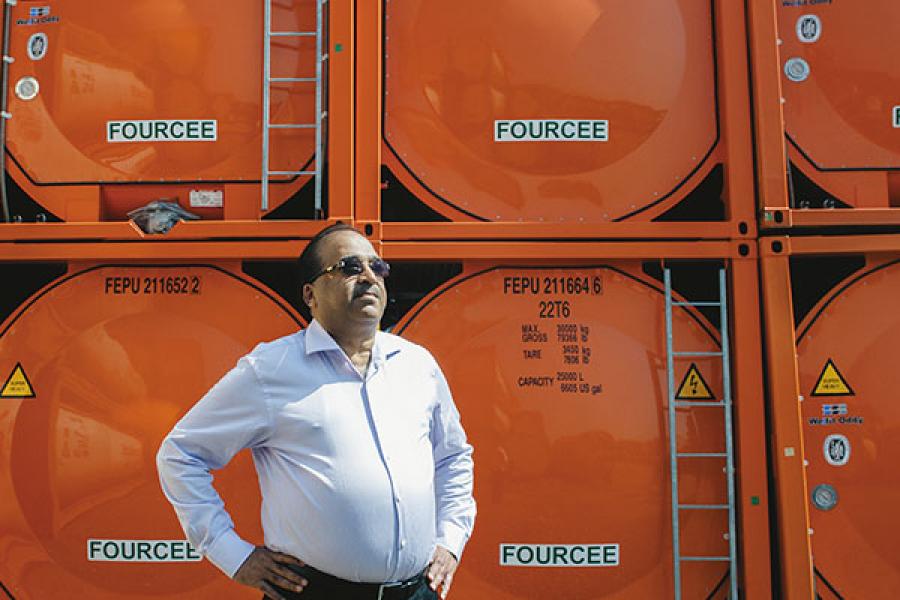 Fourcee Infrastructure has pioneered end-to-end liquid logistics solutions across India via multi-modal transport route, which has helped its clients cut raw material transport costs by more than 30 percent. The company started operations in 2006 when the Indian Railways allowed privatisation.

The man behind it
The company’s founder is Rajesh Lihala, a Mumbai-based entrepreneur who has been in the logistics business since 1976. Lihala believes in simplicity and has always put himself in the shoes of the customer. Vikram Godse of Mayfield India Fund, which was an investor in the company till recently, says Lihala is one of the best entrepreneurs he has worked with.

He figured out a way of using the railways as an effective means of transporting liquid. That has given him an advantage as road transport is far costlier than railways. Due to some of the simple solutions he created for his customers, he has been able to save around 30 percent of transportation costs for them.

One of the biggest challenges for manufacturing companies is scheduling and production planning. With Fourcee in the picture, these companies can plan their production cycle to the minute as they are now aware of the exact time and location of their raw material. Lihala feels that Generals who fought wars knew the importance of logistics because without its support many wars have been lost. He believes that corporate India doesn’t give so much importance to logistics but they are learning and it is only a matter of time till this industry becomes an integral part of corporate budgeting.

Why it is a gem
In 2010, Fourcee Infrastructure had a turnover of Rs 22 crore and touched Rs 374 crore in 2012. Its customers include Godrej, Hindalco and Reliance Industries. The company expects to clock a turnover of around Rs 600 crore for FY 2013 as the growth rate continues. Fourcee has a clear path of growth as it can handle multiple cargo that includes liquid, soda ash and fluidised cargo (where cement is delivered in liquid form). It is also offering door-to-door service to companies who want to procure materials from the international market.

Companies who have used solutions offered by Fourcee have managed to save on costs, especially during the recession. It is the only liquid logistic player that moves petrochemicals in ISO containers tanks in rail mode. It is also the only private player, which is using the Indian Railways for the movement of petrochemicals across the country.

Why it was hidden
Fourcee Infrastructure operates in the B2B space and in the little-known area of liquid logistics. The company has always kept a low profile and caters to a total of 17 large customers. Don’t expect this segment to become “cool” or “sexy” any time soon but when it comes to cold cash, Fourcee promises to generate significant amounts of it.

Risks and challenges
The biggest challenge for Fourcee is procuring the right manpower.

The industry has largely been operating in the unorganised segment, so getting the right people has been a huge challenge. Logistics is not accepted as a formal function of many companies though that is changing. Fourcee is totally dependent on the growth of the small number of clients it has.

Tweets by @forbesindia
Doshion: Flush with Funds
Lighting Up