In just five years, Amit Trivedi has given the Hindi film industry some of its most soulful tunes. Some have even given him the title of the ‘next Rahman’ 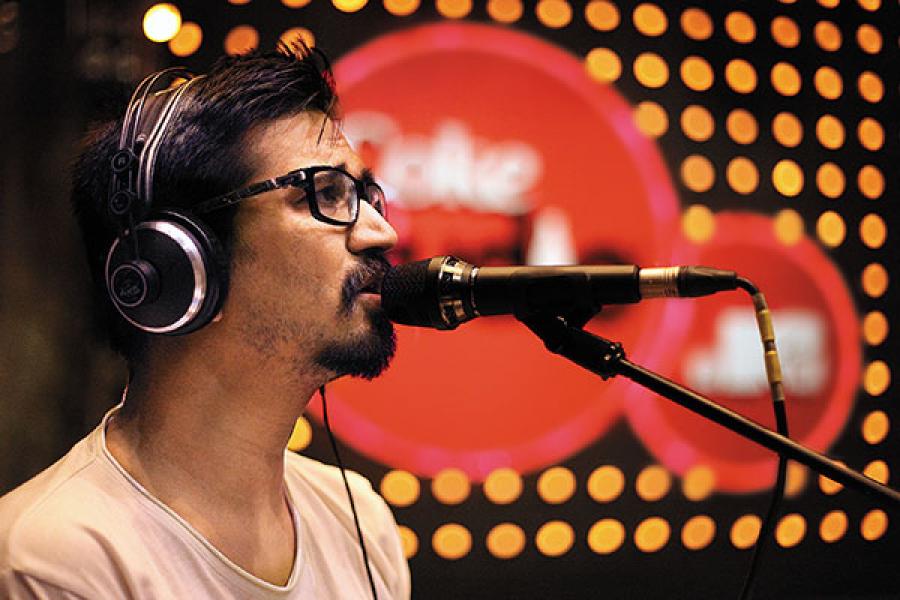 The cacophonous world of hindi film  music has a new smooth obsession. Five years and 20-odd films on, Amit Trivedi is no longer just the guy Anurag Kashyap gave a break to—he is fast becoming a trendsetter. Some have dubbed him the next big thing; a few call him a “killer musician”; and there are those that even hail him as the heir-apparent to AR Rahman, the man who has redefined film music since the ’90s.

Comparisons, albeit premature, are inevitable. Like Rahman, the 34-year-old Trivedi is reserved; a man of few words but many memorable tunes. And much like the maestro, he stays up odd hours at his garage-studio in Mumbai to make his music. Unlike Rahman, though, he is shy to a fault declining Forbes India’s interview request multiple times. “He is extremely media shy, as you know,” his wife, Kruti, said over the phone. “I’ll try to convince him though.”

Trivedi is nearly absent from the media scene, only making an appearance during music launches where the film’s lead actors, almost unfailingly, happen to be the cynosure of all eyes. He is hardly visible at film award functions and, until last year, his presence in the live music circuit was very limited too. A self-proclaimed “studio man”, Trivedi is heard the loudest when he hits the high notes of a song with his raw earthy voice that some call “imperfect” while others find “magical”.

“He’s a reluctant singer. He will record his tunes in his own voice and then have someone else sing it in the film. I tell him not to do that because he has a magical voice,” says filmmaker Vikramaditya Motwane for whom Trivedi scored music in Udaan (2010) and Lootera (2013).

Music and film historian Pavan Jha has a contrarian take on Trivedi’s voice: “His voice is strong and the texture is rustic but he hasn’t matured as a singer yet.”

While opinions may be fragmented when it comes to singer Trivedi, there is unanimous adulation for the music composer. His experimental sounds, free-flowing use of Indian folk instruments, sometimes on a distinctly Western base of rock and electronica, have created an all-new ecosystem for film music. He has introduced a plethora of new singers who have successfully broken the mould of honey-coated voices that have found favour until now.

“Amit is deeply rooted and innovative. His music ethic is superb… there is no clutter in his sounds. It takes a lot of courage and conviction to create such music in the age of noise pollution,” says lyricist-and-singer Swanand Kirkire who wrote for Trivedi’s tunes in the musically-acclaimed Kai Po Che! (2013). He also sang Trivedi’s beautiful baul-based composition Monta Re in Motwane’s Lootera.

“Amit grasps mood very well and sometimes fixes a scene with his melody. For him the setting of the film is most important. Monta Re was a simple song so apt for the situation,” says Motwane. “Also, the way he has introduced folk music in Bollywood is incredible.”

While Monta Re was influenced by Bengali folk, Shubhaarambh in Kai Po Che! used garba tunes from Gujarat and Navrai Majhi from English Vinglish was inspired by a popular Maharashtrian wedding song. “He has a signature but he adapts himself to every culture quite effortlessly,” says Kirkire.

One of the other distinguishing features of Trivedi’s music is the abundant use of Hindustani classical instruments such as sitar, esraj and sarangi as well as those from the folk genre like iktara and dholak. Kirkire says, “He introduces an instrument and utilises it to the fullest. It is not for ornamentation. It is a character in the song yet the use remains so subtle.”

Trivedi seems to have struck the right chords in the industry but he has had to wait for it.

He began composing music at the age of 20. Ad jingles, background scores for plays and television shows, a one-off orchestra here and a local gig (with college band Om) there—he just about managed to remain on the fringes. His uneventful career chugged along with the occasional music label signing him for non-film albums.

The tide turned in 2008 when friend and playback singer Shilpa Rao suggested his name to Anurag Kashyap who was on the lookout for fresh sounds for Dev D—his uber-cool take on Sarat Chandra Chattopadhyay’s much-adapted novel Devdas. Trivedi dished out a wide range of tunes—from grunge, rock and jazz to brass band, hip hop and folk—that stunned producer Vikas Bahl and director Kashyap who went on to turn the film into a musical. 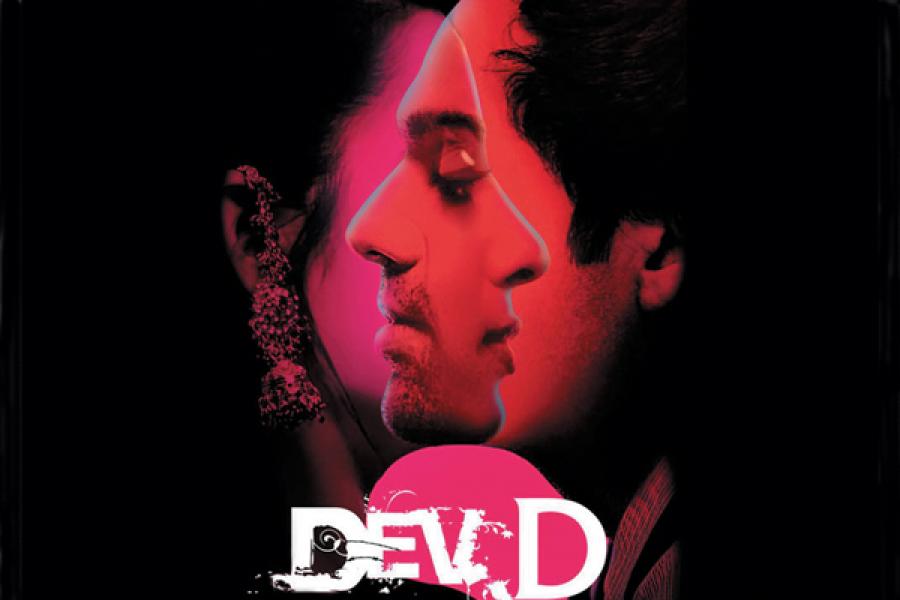 The success of Dev D catapulted Amit Trivedi into the big league and won him the National Award
“Amit was brilliant in Dev D. We hadn’t heard anything like this before,” Kashyap told Forbes India a year ago. “There were 18 tracks in the film, each one different from the other.”

But production hassles delayed Dev D and Trivedi’s debut film turned out to be Aamir (2008) directed by Raj Kumar Gupta, who had been Kashyap’s assistant in Black Friday. He composed five tracks (and lent his voice to three) for the film, including Sufi number Ha Raham that became an instant hit.

“I noticed him with Aamir,” says Jha. “The moment I heard the music I knew there was a punch and something new about it.”

But it was Kashyap’s Dev D a year later that catapulted Trivedi to the big league. Its subaltern soundtrack stormed the industry and suddenly everyone was talking about him. “We freaked out on hearing the music of Dev D!” says Motwane. “I just wanted to know who the guy was.”

Trivedi won the National Award for his score in Dev D and also the Filmfare RD Burman Award for New Music Talent. “Dev D is his best work till date. When I heard the music, I was pleasantly surprised,” says Kirkire, who first met Trivedi on a flight to Delhi. “He was going to collect the National Award for Dev D and I was going for 3 Idiots. He came across as a normal guy who was stressed about the occasion,” he says. Kirkire later teamed up with him in Gauri Shinde’s English Vinglish (2012) where “we became friends”.

After the success of Dev D, 2009 turned sweeter for Trivedi when his only composition Iktara in Dharma Productions’ Wake Up Sid went on to become the biggest chartbuster of the year. The film’s music was scored by the reputed trio of Shankar-Ehsaan-Loy but the soulful Sufi notes of Iktara stood out. Trivedi gave the industry a strong new Sufi voice, that of singer Kavita Seth, who had gone unnoticed in her earlier work. 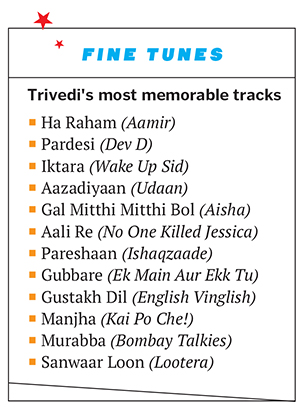 “Amit lets a singer flow. He can use all sorts of voices and get the positives out of them,” says Seth.  Iktara was a landmark in Trivedi’s career and a tune that will “stand the test of time”, says Motwane. “Instrumentation will change but the melodies will remain. People will listen to Iktara forever,” he says.

In 2010 came Motwane’s directorial debut Udaan. “Amit loved the script and we hit it off immediately. He got exactly what I wanted. I just left him alone after that,” says the director.  “It is sheer magic to see him search for the right tunes and have him present them to the director. That is a performance in itself,” adds Motwane.

Udaan’s music was appreciated for its juxtaposition of heavy rock and Indian classical. Aazaadiyan, sung by Trivedi himself, became the new youth anthem and furthered his reputation as a singer. In the years that followed, Trivedi churned out one hit album after the other. Films like Aisha, No One Killed Jessica, I Am, Trishna, Ishaqzaade, Ek Main Aur Ekk Tu and Bombay Talkies had more than one memorable track that wooed listeners and charmed his contemporaries. Vishal Dadlani (of Vishal-Shekhar fame) called him a “killer musician”.

Why does Trivedi succeed? Music historian Jha says, “Call it timing or destiny, his music has coincided with the need and the rise of fresh sounds in the films of new age directors like Anurag Kashyap and others. Ek daur aaya hai… naye filmon ka, naye sangeet ka… [This is a new era in films and music] and Amit is the flag-bearer of that.”

What separates him from the rest is his connection to India’s musical roots and heritage. “He is experimental at the same time tied to the earth,” says Jha. “His closest contemporary would be Sneha Khanwalkar [music director of Gangs of Wasseypur] but Amit rises above her because of his sense of melody. Uske kachche gaane meethe bhi hote hain [His rustic songs are sweet too].”

While the reticent Trivedi continues to operate behind closed doors, the film fraternity lauds his penchant for perfection. His filmmaker-friend Motwane sums it up aptly, “He is a true musician. He just needs to find his notes and his melody. And it is a treat to watch him in that process.”