[From our Archives] SS Rajamouli has shown how vision, commitment and big budgets can form an exotic cocktail to deliver larger-than-life stories. Case in point: Baahubali 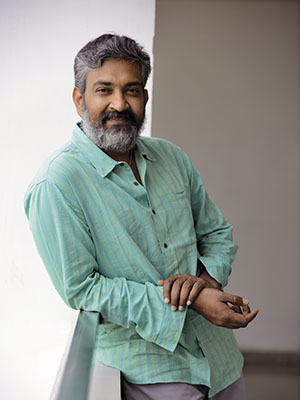 A woman on the run from her enemies gradually submerges in the swirling waters with an infant, held aloft in her extended hand even as she struggles to cross the river. She reaches the baby to safety before her lifeless body is swept away.

Years before it was shot on camera, this opening scene from Baahubali: The Beginning was a constant idea in director SS Rajamouli’s mind. It kept playing in his head, generating an emotion that refused to subside. “At a point, the emotion reached such a level that I had to free the idea from my mind and capture it on screen,” he says. For his latest directorial venture, Rajamouli recreated this scene, with as much splendour as he had visualised, using brilliant computer-generated graphics. The feeling it evoked among viewers set the tone for the film’s massive success.

Baahubali—shot as a Telugu-Tamil bilingual replete with a mega star cast, huge sets and large-scale computer imagery—is the costliest Indian film ever. While it was made with a budget exceeding Rs 200 crore, the movie has collected over Rs 600 crore since its release in July this year, making it the third-largest grosser in the history of Indian cinema after PK (2014) and Bajrangi Bhaijaan (2015). If domestic collections alone (Rs 500 crore) are considered, Baahubali leads the pack. Even the dubbed version of the film in Hindi grossed Rs 100 crore: An unprecedented feat.

This success has catapulted Rajamouli from the world of Telugu cinema (popularly called Tollywood) to the national stage and he finds himself ranked at No 72 on the 2015 Forbes India Celebrity 100 List. For Rajamouli, success has become a habit: He holds an enviable record of delivering a hit with every film he has directed so far, Baahubali being his tenth. His admirers call him a magician and a master storyteller. The more generous among them even bracket him alongside great auteur directors such as Steven Spielberg, Christopher Nolan and James Cameron.

Rajamouli’s tryst with storytelling began early. He was nine when his father KV Vijayendra Prasad—an acclaimed screen writer who also wrote the script for Baahubali—took him to the town library at Kovvur in the West Godavari district of Andhra Pradesh and introduced him to Amar Chitra Katha. “The [Amar Chitra Katha] stories are my biggest inspiration. The mythical stories that I read never left me,” says Rajamouli, 42, sitting in his spartan office in Hyderabad’s Film Nagar, two yellow writing boards filled with the design and shooting schedule for the sequel to Baahubali dominating the room.

As he grew up, storytelling became his passion. “I like to see the expression of surprise or emotion on the audience’s face as I narrate a story. If they are happy, it brings me great joy,” he adds. It is only natural that no profession other than film-making crossed his mind. He did not continue studies beyond class 12. After lazying around for a few years after school, he began to direct television serials.

His first film Student No 1 (2001) was a musical drama, following which he directed five films between 2001 and 2007. Despite being hits, his initial movies fell short of being the larger-than-life stories Rajamouli always wanted to tell. “Initially, I took the opportunities that came my way as I had to establish myself,” he says. “The bigger stories that I wanted to narrate required larger funding and I needed to prove myself to convince producers to put in that amount of money.” He acquired this knowledge through experience as after Student No 1, he had tried making a folklore-based film (he had Malayalam star Mohanlal in mind for the lead role) but the project did not take off as no producer was willing to invest the huge amount of money that was required.

In 2009, he directed Magadheera, a part period film based on the subject of reincarnation. The Rs 40-crore movie was a massive hit. In 2012, he came out with the fantasy drama Eega where his prowess in special effects was on full display. Eega rocked the box office and was remade in many languages. The success of Magadheera and Eega emboldened Rajamouli to try something bigger and Baahubali began to take shape in 2012. The film was visualised and executed on a different paradigm altogether. “On a scale of 0 to 100, most Indian movies score anywhere between 30 and 60. We have the know-how—good stories and star cast—to make films in this band,” he says, adding, “If you are aiming above the 60 mark, the amount of effort–physically and creatively–grows exponentially, not progressively, by four to five times. You have to think more, be extra careful and put a lot of additional effort.”

This effort is apparent in Baahubali. A whole year was dedicated for the film’s pre-production work, production lasted another year and post-production work yet another year. Hundreds of artists were hired for pre-visualisation and thousands of sketches were prepared. Actors and technicians dedicated a lot of time. They were trained in body building, horse riding, mountain climbing and using weapons. Since it was a big-budget movie, the team began looking for global franchising even during the pre-production stage by getting distributors abroad interested in the project. According to Rajamouli, Rs 40 crore was spent even before the first shot.

So, what makes Rajamouli put his shoulders to the wheel each time he undertakes a project? “He is obsessive about cinema,” says Prabhas, who played the protagonist in Baahubali. “His visualisation is grand and, at the same time, goes into very minute details,” says Sabu Cyril, production designer for Baahubali and four-time National Award winner for Best Art Direction. He and his team came up with as many as 25,000 sketches to design the various grand sets for the film. “He ensured that every pillar and wall had the right design. He makes no compromises,” Cyril adds.

It is little wonder, then, that critics love his work. “Rajamouli is a great storyteller. He knows people expect something new with every film. He takes up familiar concepts and develops them in an unfamiliar and acceptable way,” says Baradwaj Rangan, a film critic who writes for The Hindu.

Another important Rajamouli trait is that he inspires people to give more. Prabhas has promised to dedicate for Rajamouli almost five years of his career (he had agreed not to take up any other movie till both parts of Baahubali were complete). “It is Rajamouli and the size of the film that made me do this. I have known him for more than a decade and he always surprises me with his thought process and scripts,” says Prabhas. “With Baahubali, he showed us what vision could do to a film. Every day was an experiment. I always wonder how many brains he has.”

It was not Prabhas alone who sacrificed big for the film. Cyril literally shifted his base from Mumbai to Hyderabad. The film’s visual effects supervisor V Srinivas Mohan, who has worked for films such as Robot (2010), also spent a lot of time in Hyderabad. It is Rajamouli’s vision and commitment that inspire his co-artists, says Shobu Yarlagadda, CEO, Arka Mediaworks—the production house that co-produced Baahubali.

That works for the producers too. They chose to invest a little over Rs 200 crore in the movie when the largest revenue a Telugu movie had ever grossed was Rs 80 crore. “If the budget was Rs 200 crore on day one, we would not have done it. We started with around Rs 100 crore and the cost went up as the movie took shape,” says Yarlagadda. “We knew something great was getting created and we decided to go the full length.” But the bulk of it was spent on enhancing the viewer experience. The team, apart from the big stars, stayed in budget hotels and travelled cheap to cut costs.

“He delivers what he sets out to achieve. His every film is a hit and he is very committed,” Yarlagadda says. “With Eega, he proved that we can spend Rs 30 crore, not have an accomplished star in the cast and still deliver a massive hit.”

Like the producers, Rajamouli is conscious of the financial success of his films. “He is very open to the concerns of producers. With him, it is a partnership where he and the producer go that extra mile,” says Yarlagadda. He is not the director who says ‘give me Rs 200 crore’ and makes a movie as he wishes. Also, he is not a director who would only make a big-budget film. “The script should decide the budget,” Rajamouli says and he has lived up to this policy. After he spent Rs 40 crore on Magadheera, he directed Maryada Ramanna with a budget of Rs 10 crore. Then came Eega and after that, Baahubali.

Ask him what makes a film work and his answer is, “I don’t know. In hindsight, I find that certain emotions which stay with me for a long time also work very well with the audience (like the woman and the baby scene).”

It isn’t easy to stay grounded in the face of such success, but Rajamouli hasn’t allowed it to go to his head. “I feel embarrassed,” he says when asked about being called an auteur director. “Directors like Spielberg, Cameron and Nolan are miles ahead of me and their expertise in handling various aspects of film-making is phenomenal. You have to be honest with yourself,” he says.

So when actors like Prabhas say that the best thing about Rajamouli as a person is his simplicity and beautiful soul, it isn’t difficult to see why.