But, the writer wants to know, is there a specific timeframe for 'Achhe Din' or will it be an indefinite wait? 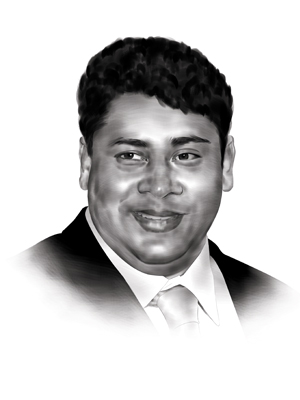 Image: Sameer Pawar
The author is a comedian and a television personality

When Forbes India magazine called me up, I thought it was to make fun of me. In fact, I did hear derisive laughter in the background, only to be told that the noise was actually coming from a coffee maker which, though in working condition, had stopped making coffee years ago. When, however, they refused to be sarcastic, I decided to change tack. My exact words were (said in the gentlest way possible): “Please don’t call up 44-year-old men who still live with their parents. You should be ashamed of yourself! You’re Forbes, for God’s sake!” Then I proceeded to give them the numbers of all the cricketers and NGOs I knew. Yet Forbes India apparently favours the brave. They persisted. In fact, I was told to write a column on what to expect from 2016.

I dug deep into my reservoirs of financial experience as a consultant to my eight-year-old daughter; a consultancy that consisted wholly of planning how to buy and hide a Rs 20-packet of Lay’s masala chips without her mother (my sometime wife) finding out, every Saturday. I then asked them who else was writing for them. The answer was shocking: CEOs from across the country. Not a single leftist, taxi driver, foreigner, or startup guy who went bust was even considered.

So I decided under duress to write this piece, so as to represent the non-CEOs as well as the left-handed and homosexual communities, both of which are overlooked in business circles. Please note that I’ve researched all my findings with my three associates, Fred I Kent, Lee Iacocca and Kautilya himself. So, don’t you dare contradict me.

At the outset we have to look back at 2015, the year that was renamed as ‘Achhe Din’. That’s ancient Prakrit for the number 2015, I’m told by various men in oversized brown shorts.

You and I both know that didn’t quite happen. Why? I’ll let you tackle that answer, aunty. No? Okay, the reason is simple: If we had ‘Achhe Din’, I wouldn’t be writing this, you wouldn’t be reading this and Forbes India’s year-ender would just have been cover to cover in figures. Hour-glass figure that is. Yup, we’d all be celebrating. Me in Amritsar, you in Switzerland, where you’d combine, shall we say, business with pleasure? So let’s not lose too much sweat, er, equity over this. It wasn’t a horrid year. Just wasn’t a great one. I’m still with the same wife and children that I started the year with, for instance. In the spirit of compromise, and 75 percent because of rabid fear about the present intolerance levels, we declared 2015 an ‘achhe-ish din’ year. 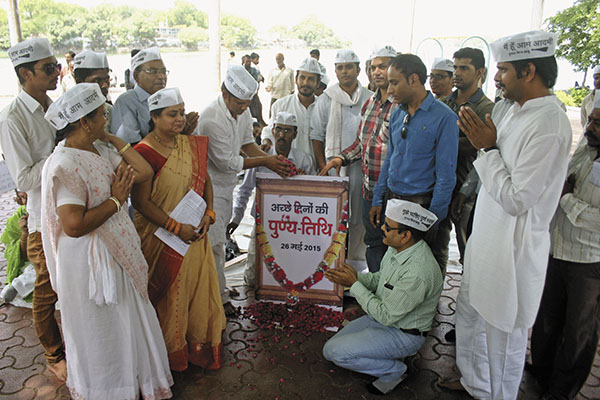 Image: Bidesh Manna / Getty Images
AAP workers observe the death anniversary of Achhe Din on the occasion of the BJP-led government completing one year in office

Now let’s turn our attention to 2016. The biggest fear is the rupee, which is running low on fuel. Petrol being too expensive we switched to diesel, which also having been ostracised by the year-end means our rupee has to depend upon gas. And gas, my friend, is one tough customer. With a poor reliability-performance ratio. And I speak from personal experience. I practically have made a career of it. If the rupee plunges any further, we’ll probably have to resort to the pre-Mohenjodaro custom of barter. You give me your bike, I give you my dishwasher. The big problem I forsee is when the time comes to exchange old relatives and during IPL auctions (the latter comes by five times a year), the chances of a foreign holiday will start receding. And please don’t tell me to take the kids to Bangladesh again. Then like all males stuck in the cesspool of domesticity, I’ll turn to those two spiritual guides—tobacco and alcohol. However if cigarettes get taxed any more, and I expect they will, India will become a very quiet place. A double blow to diesel and tobacco means coughing will be eradicated. Coughing will end, and never be heard.

As for alcohol, has anything been more persecuted in its time than alcohol? Alcohol is over-taxed, hidden, not allowed in public, and made to feel like the chamber maid’s chamber maid. The government, it seems, is all set to kill it as a concept, forgetting its therapeutic role—as a balm for government, career, family and Altaf Raja’s qawalis.

And now I’d like to issue the government with a realty check. (Please indulge the pun, can’t afford real humour at those prices). This many-headed Hydra called property tax looms over us all. Here’s my suggestion. Since India is the government’s property and property owners have to pay tax, shouldn’t the government of India pay all our property tax? Makes perfect sense to me. Would make even more perfect sense if I could digest that thought with alcohol which one can ill-afford and, bear in mind, I write this while I’m selling my ashtray, so hope is fading. I would now like to end my Economic Reform Almanac with a slightly open letter to the government who I will address as Sarkar, as I am told that all business in 2017 are poised to be conducted in Sanskrit.

What’s up? Ok, definitely not the rupee so don’t answer that. I’m a middle class, middle aged, middle sized male who lives with his parents. Just reminding you that you had promised ‘Achhe Din’. Would request you to give us a specific date on that one, so many of us can plan our daughter’s weddings. Also much confusion in the auto industry. Reality, realty and even entertainment. Need to have a close sit down with a pow wow and exchange of ideas. If you’re feeling financially constrained, the rendezvous could strictly be a BYOB thingee. Also for Mumbai, these road repairs that are going on from 1947, could we also get a date on when that would end? Ballpark would be fine. For my part I’ve given up beef and never leave house without my copy of the Rig Veda (albeit children’s version).

Thank you. Looking forward to our picnic and having my shorts pressed as we speak.

Postscript: 2016, it is safe to say, will be 2015, but with the extra ‘one’ added to it. And I base this observation on the simple premise that for this long winded exhaustively researched, thought provoking visionary article, the magazine refused to pay me a rupee.

(This story appears in the 22 January, 2016 issue of Forbes India. To visit our Archives, click here.)