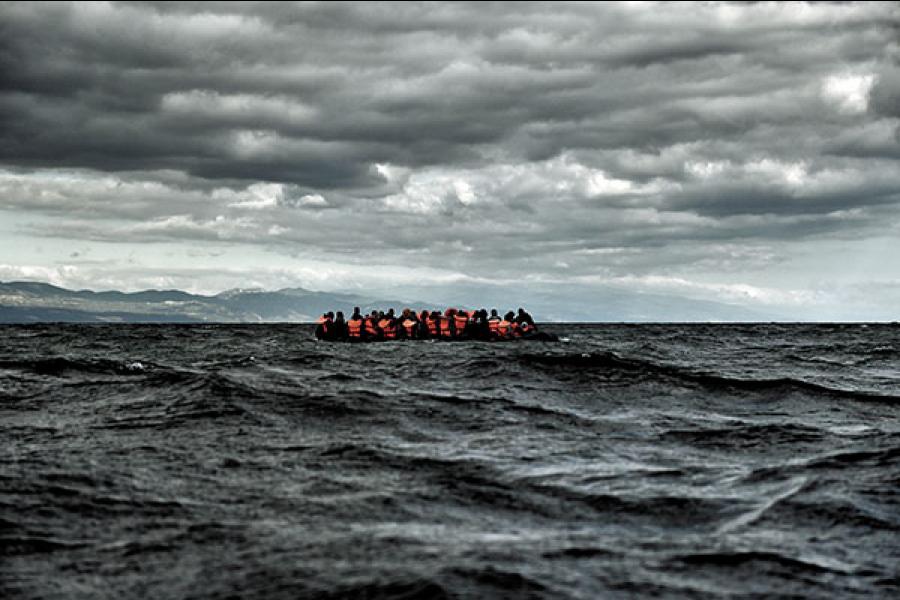 Image: Getty Images
Refugees on their way to Greece from Turkey in October. Germany has received the largest number of asylum applicants in Europe

Hiraeth: Homesickness for a place you cannot return to or that never was.

A cold wind blows across Berlin. It makes the fir trees, all decorated with Christmas baubles, sway back and forth gently. The people walking through the Weihnachtsmarkt, or Christmas Market, in Alexanderplatz clutch their jackets closer, tighten the mufflers around their necks, and pull their woolen caps down over their ears. The sound of carols and singing and laughter is intermittently interrupted by the chattering of teeth. It isn’t Berlin’s coldest winter—there are no snowflakes drifting down from the skies to coat the top of the Fernsehturm or caress the backs of the galloping stone horses atop the Brandenburg Gate—but it is cold enough. Both literally and metaphorically. For some more so than the others.

“The day my uncles and aunts and cousins back in Syria begin to think of hope, that is the day, believe me, I will be happy.”

We’re sitting in a small café nestled in the south of Berlin. It’s 8 am and the sun has decided to briefly peek out from behind ominous grey clouds. It does little to warm us, for the café door is open, and the menacing wind reaches in there too. To restore some feeling in my fingers, I hold on to a cup of strong coffee. The young man sitting across the table has been too busy talking to me of Syria to sip from the glass of hot chocolate he’s ordered. It’s far from hot now; in fact, it’s cold. Just like everything else. His feeling of Christmas cheer seems to have faded while speaking to me. I’ve asked too many questions, brought up too many memories. There have been wry smiles; queries, the answers to which are impossible; and long periods of silence. Like the one that follows after he makes this statement about hope. We both look at the table for a long time before he begins to speak again.

“I’m not speaking of hope itself. I’m speaking about just the thought of hope as a possibility,” he says. And as he utters these words, I think back to a similar, recent meeting.

It’s two days to Christmas and I’m being ushered into a cubicle. It’s a small space, with three bunk beds piled high with bedding, bedclothes, laundry, luggage and toys. There are children playing on the floor and I can’t tell if the older ones are worrying the little ones or entertaining them. But amidst the howling, screaming, and shrieking, Christmas presents from volunteers and NGOs are being unwrapped. The women who have invited me into their cubicle within the refugee camp in Berlin try to hastily clean up a little, but it’s far too chaotic. It’s the sort of mess you expect when a space this size has to house three families. But it will have to do. Because it is far away from the guns and firing that kept the little ones awake at night; far away from the bombs that brought their houses down. It is, as one of the women tells me uttering the word emphatically, her eyes shining bright, “safe”.

As she says this, she cradles her belly. It’s the only thing that’s worried the 33-year-old since she arrived at this camp. She’s one month away from having a baby. It’s not the ideal environment in which to deliver a child, but, then, neither was the place she left behind. She’s not been eating much because she can’t stomach the food being served here. So she’s been restricting herself to eating fruit—an apple or a banana in the morning and the same in the evening. Back in Syria, before the school came down in an explosion that shook Aleppo, she used to be a teacher. Then everything changed: Her husband, she and their three children, with a fourth on the way, fled. The pregnancy is taking too heavy a toll on her for her to attend the German lessons that have been organised for asylum seekers. But her husband, who was a geography teacher in Syria, is studying hard every evening. It’s the only way to be granted ‘refugee’ status and get a job in Germany quickly. The children’s studies must resume soon too, she says. Which is really why they’re here: With the situation in Syria worsening every single day, effectively putting an end to all hopes of education, there seemed to be no choice but to flee. On the one hand, it seemed foolish to abandon everything that they had known, but, on the other, it would have been more foolish to stay on. 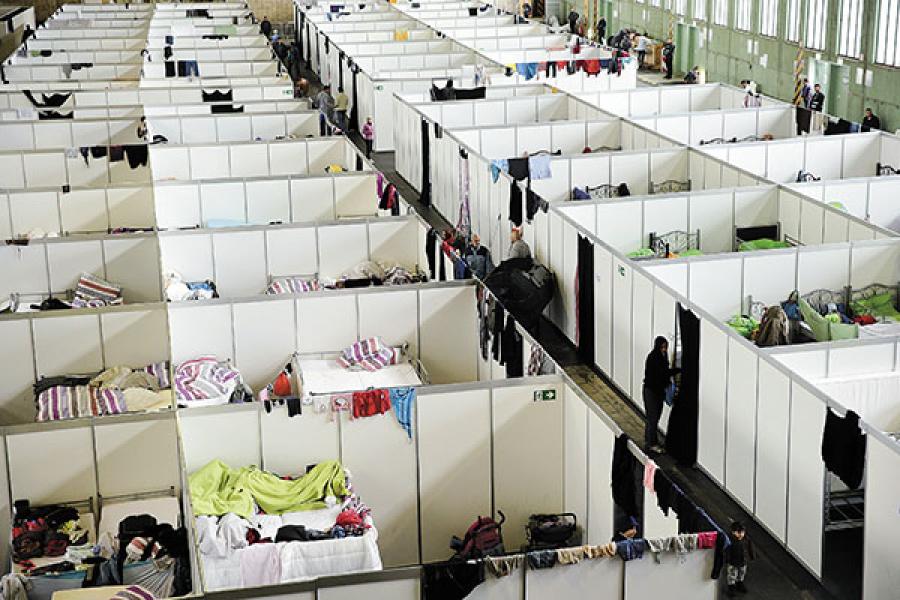 Image: Fabrizio Bensch / Reuters
Migrants seeking asylum in Germany are accommodated at a shelter inside a hangar of the former Tempelhof airport in Berlin