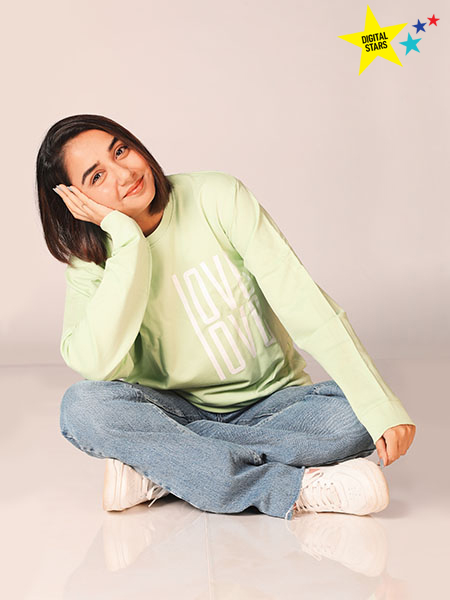 Prajakta Koli launched her merchandise line in 2021. It comprises T-shirts, hoodies, sweatshirts, mugs, totes, masks, and sippers, among other things

When Amisha Gupta recently wore a red-coloured hoodie during a day out with friends, the 25-year-old Mumbai baker did not expect her friends to recognise ‘MostlySane’ that was printed on it. To her surprise, three of her friends knew that the hoodie was from the merchandise collection of Prajakta Koli, a content creator and actor, whose YouTube channel is called ‘MostlySane’. “One of my friends has also bought the hoodie,” says Gupta, a follower of Koli’s content, adding that she received compliments on her hoodie from two people that day. “I bought her merchandise out of love for her work. I didn’t realise her clothes would become so mainstream,” she says.

Having started her career with videos on YouTube at the age of 20, Prajakta Koli has close to seven million followers on YouTube, and five million on Instagram. “Back in 2017, we came across a couple of my followers gifting each other products or clothes that had my content references or my name on them. We realised that there is a potential to launch an official merchandise, but we held off because I didn’t feel it was the right time,” says Koli.

With time, as she became more popular, she organised events to gauge the demand for her merchandise. “The response was overwhelming,” she says. This led her to launch a merchandise line in 2021, offering T-shirts, hoodies, sweatshirts, mugs, totes, masks, and sippers, among other things.

Bhuvan Bam is one of the first influencers in India to start his label named Youthiapa with friend Arvin Bhandari back in January 2017. “I remember how the website crashed within minutes on the day of the launch. The response to the merchandise ever since the launch has been amazing,” says Bam.

The demand for influencer-led merchandise is on the rise. Content creator Vishnu Kaushal, for instance, launched his merchandise named Peach by Vishnu in August 2021 and has released four collections since, all of which got sold out within days. “The goal is to create something people can have a relationship with, like Zara, which is known not only for clothes, but also the design,” the 25-year-old explains.

Having worked with a design agency before getting into content creation full time, Kaushal’s collections are design- and detail-oriented. While the idea is to reflect a part of his identity in what he designs, he doesn’t restrict it to that. “I want to add meaning to whatever I offer... it shouldn’t just be merchandise but something that people get attracted to because they relate to the idea of it,” he adds.

“Vishnu’s designs are aesthetic, comfortable and fashionable. Both his journey as a creator and his clothes resonate with me,” says Sana Singh, 23, a consultant who has been following Kaushal’s work for close to three years. 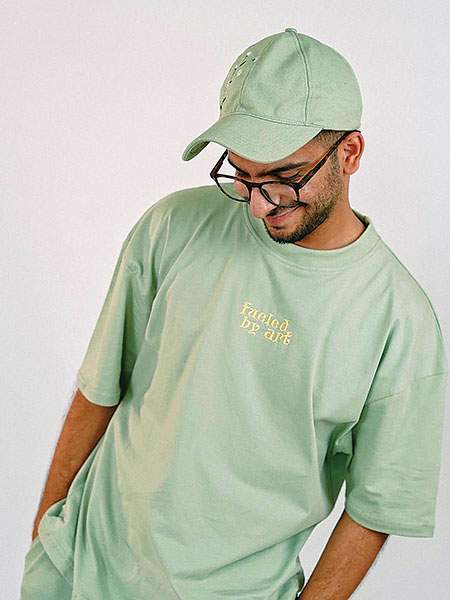 Vishnu Kaushal’s merchandise, Peach by Vishnu, was launched in August 2021

With more than 50 million independent content creators, curators and community builders globally, micro-entrepreneurship is currently valued at $20 billion with estimates that it could grow to a $104.2 billion market in 2022—with $800 million in venture capital invested in these creator ventures year over year, as per venture capital firm Signal Fire as of December 2021.

Internationally, the creator merchandise market has been growing, with a specific surge during the pandemic as creators had time to work on their merchandise.

TikTok star Larray has a line of merchandise called Girlies XO, and YouTuber David Dobrik launched a merchandise line called Clickbait. One of internet’s most popular celebrity family, the Kardashians, has turned merchandising into a million-dollar business.

In India, influencer-led brands are still at a nascent stage with only a handful of successful creators like Anchal Agrawal, Madhur Bachal, Deeksha Khurana and Parul Gulati launching their labels. 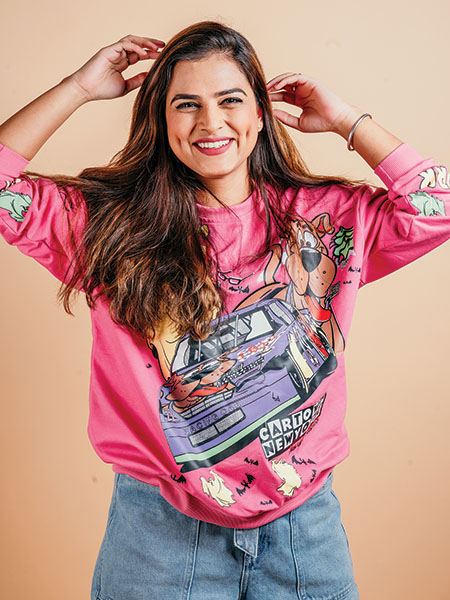 Aanchal Agrawal has started an organisation called All Women Inc. She wants to diversify and not miss out on earning additional revenue

“A content creator is an entrepreneur, after all. Just like any other business that diversifies into new geographies, brand extensions and product offerings, a content creator launching their D2C brands is growth and an opportunity to scale their business,” she says. “Today the influencer-led marketing economy alone is estimated around `1,000 crore and expected to touch `4,000 crore in the next two years.”

Content creator and stand-up comic Aanchal Agrawal, 30, agrees. “I want to diversify as much as possible, and launching my merchandise gives me another way to connect with my audience and create a community that believes in my work. It is a way for people to wear their fandom and flex it, so I did not want to miss out on that. And, of course, who doesn’t like additional revenue?” she says.

Agrawal has started an organisation called All Women Inc to spread awareness on issues like freedom of choice for women and how it can be exercised. “I want to make my brand echo the same sentiments, having a strong sense of community,” she adds.

With the success of their labels, content creators are now onboarding business growth consultants to scale, Saigal says. “They have also started looking at other businesses as investment options for scaling their business.” 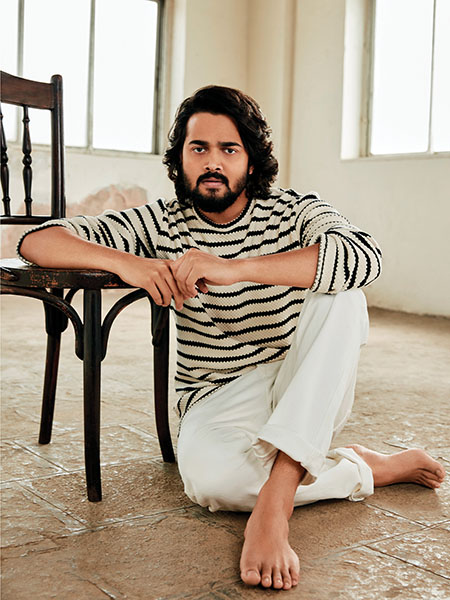 Bam, for instance, has invested in three growth-stage startups, including HYPD technologies, a creator-driven marketplace. He plans to launch his production house and expand his brand’s presence. “We want to tie up with pop-up shops where events can be curated to promote the merch and people can buy the products in-person. The vision is also to do a live concert where 5,000 people are dressed in Youthiapa merchandise,” he says.

Kaushal wants to build an omnichannel presence. “I want to have a store that would be my version of a Miniso, an outlet where we have items across categories that display everything I love and know that my audience will love,” he says. “I want to create a space where people can sit, talk, eat and network.”

Influencer Madhura Bachal shot to fame with her cooking recipes on YouTube and has launched her brand of traditional spices from Maharashtra named MadhurasRecipe. She has sold more than two lakh items in two years. She has also written five recipe books that have become bestsellers on Amazon. “We have an online presence and are planning to expand to outlets like Reliance and Bharti Bazaar [in Pune]. Once successful, we’ll expand our presence to local grocery stores. Additionally, we are also looking at options to expand to sell overseas in order to cater to the demand there,” she says.

“These labels have the potential to become full-fledged brands if creators cultivate and grow their business acumen,” says Hitesh Rajwani, CEO of Social Samosa Network, an influencer marketing agency. “Not all of them have business acumen, but if they find partners who have expertise in setting up layers of commerce over digital audiences, these brands can grow by leaps and bounds.”

Rajwani draws up a comparison between creator-led brands and D2C brands. “Mainstream D2C players spend a considerable amount of time in creating awareness, building trust and credibility. The net conversion rate, therefore, is low in the formative years. Creator-led D2C labels are built on authenticity, credibility and distribution capabilities of creators,” he explains. “Mainstream D2C players have to make hefty investments to acquire their first set of consumers. Creator-led D2C labels have a head-start in acquiring the first 100 to 1,000 consumers owing to the larger audience pool. Hence, they can switch gears faster than other players and drive performance at scale.”

Rajwani is bullish about creator commerce because of the fan base of the content creators. “The kind of love and support they get is at par with that of mainstream celebrities,” he says.

Kunal Kishore, COO and co-founder of Clan Connect, an influencer marketing platform, has an opposing view. He believes as more influencers launch their brands, the chances of success will plummet. “There will also be many failures. Where celebrity brands like HRX and Being Human have become huge names, we’ve also seen brands by Jacquline Fernandez and Tiger Shroff fizzle out, despite an ardent fan base. A similar pattern is likely to play out in the influencer space,” he says. “While it is the right time to think of creating D2C brands, influencers will also need to innovate and retain their authenticity to ensure the large-scale success of their labels,” he adds.

Creators are keen to diversify their monetisation mediums, says Kishore. “Building D2C brands is just one aspect of the larger picture when it comes to creating multiple revenue streams. Several prominent influencers are creating paid workshops to teach the skills that they have mastered. While creator revenue is largely generated from brand collaborations currently, such initiatives will give a fillip to creator-to-consumer revenue-generation models,” he says. “Live content, ticketed virtual events and NFTs will contribute to such a model, expanding the creator ecosystem’s ability to generate revenue through multiple avenues.”

Gupta says she doesn’t consider influencer-led labels just merchandise, “The designs offered by these creators are amazing. I fail to distinguish between them and any other mainstream D2C brand.”

Singh agrees, “If you ask me to choose between a Vishnu Kaushal T-shirt and a mainstream brand’s T-shirt, I’d pick Kaushal’s.” But since there are limited options, these merchandises are nowhere close to replacing mainstream brands, she adds.

Rajwani is optimistic about the success of influencer-led brands in India. “When mainstream D2C players do a SWOT analysis, creators might fall in the ‘opportunities’ grid as a means to expand territories and exchange audiences,” he says. “With the rise of creator-led brands, the day is not far when creator labels appear in the ‘threats’ grid for brands.”

Tweets by @forbesindia
Why are 'Mr. Men and Little Miss' characters all over social media?
India is one of our biggest growth markets: IKEA India CEO