Using comic strips, videos, photographs and reels, these eco-warriors are generating awareness about climate change and sustainable living among their followers 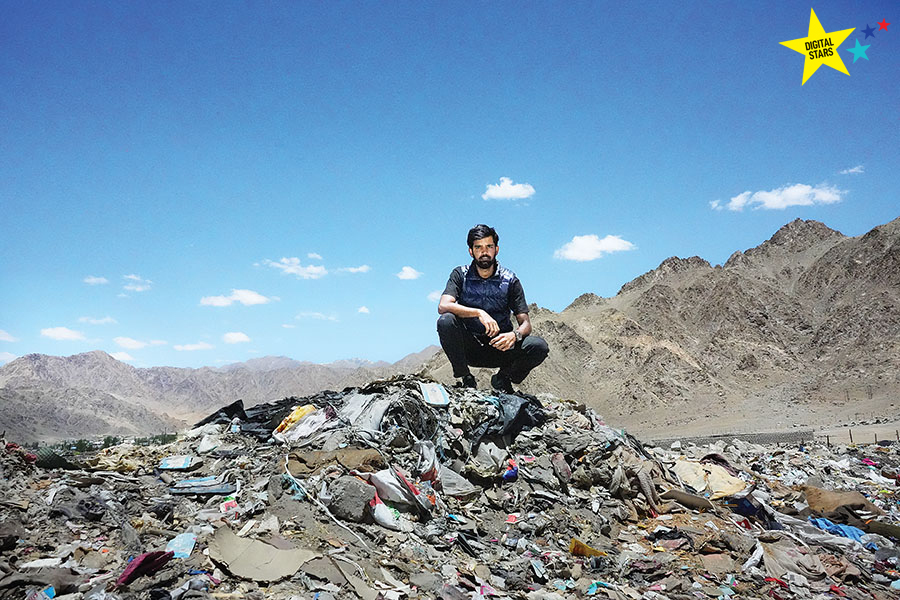 Aakash Ranison was devastated to see plastic waste amidst the mesmerising beauty of Ladakh. Since then he has been creating content about the climate crisis

It was in 2015 while travelling in Ladakh that Aakash Ranison was first confronted with the devastating effects of environmental degradation. As an avid traveller, he had been to many places in India where plastic litter and trash on roadsides was a common sighting. But when he saw plastic waste amidst the mesmerising beauty of Ladakh, he was shocked. It made him think of the countless problems that it can cause in the area—what if it’s left unmanaged, if it reaches water bodies and negatively affects them, and the various ways in which we are slowly inching towards a climate crisis. “That shock triggered something in me. From that day onwards, I couldn’t think of anything else but devoting all of my time and effort to advocating climate action and fighting for our environment,” says Ranison.

He started researching on climate issues and in 2017 began creating content about the same. His philosophy and approach to his content is to simplify the complexities of climate science for the layman so that more people can join the conversation and advocate for what is right. From videos explaining terms such as greenwashing—a form of marketing spin where companies purport to be environmentally conscious but in reality are not, to suggestions on what documentaries to watch on climate change and how much the tourism industry contributes to the climate crisis, he creates engaging content that can inspire people to participate and ask questions.

The 27-year-old climate action activist who hails from Indore, Madhya Pradesh, has been documenting and advocating sustainable living for five years now, and recently also published a book, Climate Change Explained: For One and All.

Aakash Ranison is one of the many climate change foot soldiers in the digital world who are making a difference in the battle to save the environment. Through their creative content in the form of podcasts, videos, art, photographs and reels, these green influencers are constantly reminding people of the drastic effect that human activities have on the environment, and ways in which we can change them—one step at a time. And social media platforms are no longer just a source of fun and recreation, but are instead becoming a new place to learn, unlearn, and educate.

Rohan Chakravarty is another such educator. Chakravarty started his career as a cartoonist in 2012, trying his hand at drawing cartoons on social issues and glamour. “I wasn’t enjoying it until wildlife happened to me, which came about in the form of a tiger sighting,” says Chakravarty, who uses a blend of art and humour to draw illustrations and cartoon strips around climate and wildlife conservation. The idea to use cartoons to bring forth information on wildlife conservation was also the seed for Green Humour—Chakravarty’s cartoon strip column on wildlife conservation, which started with Saevus magazine in 2012, and since 2017 is being published in several publications, including The Hindu Sunday. His work was also picked up by Gocomics, (an online platform of the Universal Press Syndicate), the first time a comic strip from India was syndicated globally.

Chakravarty, who has done the illustrations for several books and authored five books on the environment, has been using Instagram to post his work and raise the issue of climate conservation among his many followers. “When I started out, there wasn’t much creative communication happening in terms of disseminating information around climate change and wildlife conversation. Now, of course, there are so many others doing it,” says Chakravarty.

Nayana Premnath started adding to the conversation in 2019 when she first came across the menstrual cup. “The menstrual cup was what led me to a rabbit hole of information on sustainability and zero waste living,” she says. Premnath, who has studied architecture, had discovered how climate friendly and sustainable it was, and wanted to share this with other women. “It was at this point that I realised how happy it made me to make videos on sustainability, and there’s been no looking back since then,” says Premnath, who is now a Sustainable Lifestyle Educator & Eco-YouTuber.

Premnath produces content based on research on sustainable living, and includes products and methods to be more sustainable, as well as information on alternatives to climate-damaging products, ways of sustainable shopping, sustainable fashion, etc.

According to a recent UN report, “nearly half the planet’s population is highly vulnerable to a devastating array of climate impacts”. Economies, activists, organisations and citizens have all come to understand and make positive changes against the grave danger of climate change.

Companies—big and small—and across sectors are taking into consideration ways of reducing their carbon footprint by trying to optimise their resources, reduce greenhouse emissions and plastic waste. But what can be done at an individual level to move towards sustainable living?

Pankti Pandey has some answers. A zero-waste practitioner, Pandey started content creation on sustainable living during the lockdown. Belonging to a middle-class family in Ahmedabad, Pandey had grown up seeing her family being mindful of resources and waste management. But certain trends on Instagram during the lockdown, and even today, showed her a completely different picture. “I was very upset to see over-consumption of things on social media, people were promoting over-consumption, and a conversation around the mindful use of resources of any kind was hardly the discourse. I thought that this needed to change, and thus began my channel on sustainable content—zerowasteadda,” says Pandey, who has an engineering degree and works as an RF Microwave Scientist. 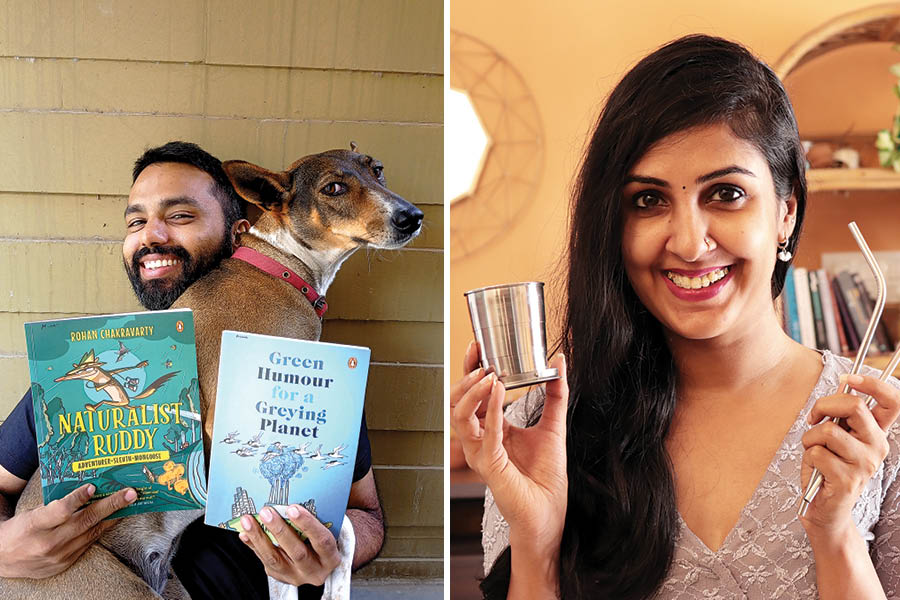 Zerowasteadda includes content—largely through learnings from her own journey—that provides simple do-it-yourself techniques and hacks through which people can make sustainable choices in their daily life such as ‘How much water can be saved if we opt for a bucket bath vs a shower?’

A sustainability consultant officially and a green influencer in his leisure time, Saif Ahmed who calls himself ‘The Sustainability Guy’, is another individual using digital media to create awareness. Ahmed, who has an MSc in Sustainability and Consultancy from the University of Leeds, creates videos that promote sustainable living practices in a humorous and relatable way. Some of his videos include content on the kinds of plastic and their usage, ghost electricity or standby power, green bus stops and the cities promoting them etc.

“My mother is a big reason for my interest and passion for this journey on sustainability. She practised waste management at home since childhood and also made sure that my siblings and I imbibed certain fundamental values like giving back to society,” says Ahmed, who used to like making funny videos since he was a kid and decided to revive the hobby during the lockdown. “I didn’t know which topic to take up and then I realised that as a sustainability consultant, I had a lot of knowledge about sustainability whereas my friends and family were still stuck at basic sustainability knowledge like polar bears and tree plantations etc. So, that’s where I sensed an opportunity to make a difference, and spread my knowledge with others.” 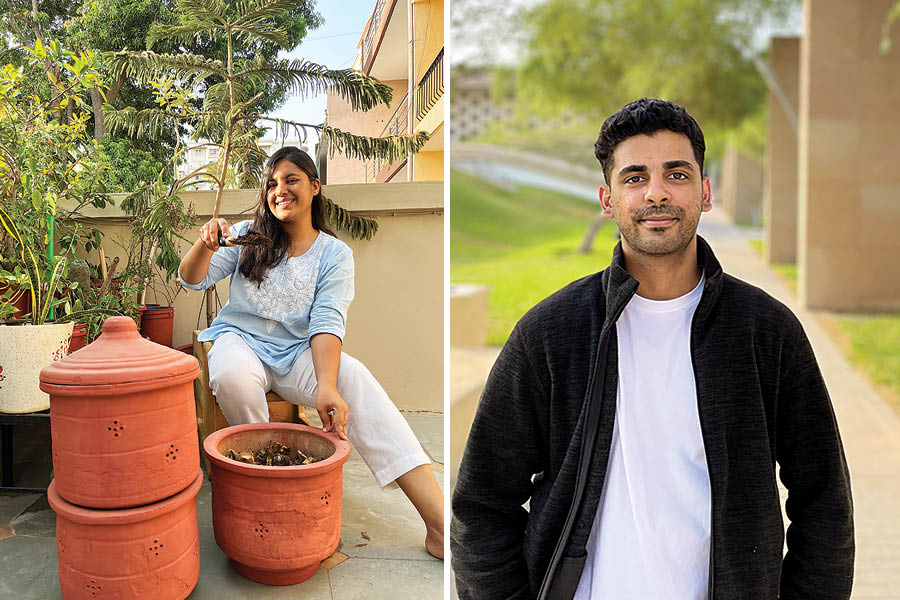 Environmentalist, climate activist and convenor of Awaaz Foundation Sumaira Abdulali, who also follows these digital changemakers, believes that young people have been vocal on social media to build conversations and awareness about climate change since they are the ones who will be most impacted by its long-term effects.

“Influencers on social media have had a tremendous impact across all sectors, and awareness about climate change and sustainability is no exception to this trend. Peer pressure and influences create the conditions for real change in thinking among the young people and impact almost all aspects of their daily lives, including the increasing awareness of the need for sustainability,” says Abdulali.

Rasleen Grover, a researcher at the Institute of Public Health, and a content creator herself, is one such follower who has taken inspiration from the content on sustainability. “It’s been a year since I started following thesustainabilityguy and zerowatseadda. Their content is very informative and entertaining, and they keep sharing interesting concepts and recent developments around sustainability and climate policies. I love how they blend heartfelt humour with this information,” says Grover, 22, who has over the past year become more conscious about her plastic usage, and also constantly reminds her friends of the same.

It is exactly what keeps the green influencers going. “To me, the most remarkable thing about what I do is the effect I am able to have on people’s lives through my content. Many of my followers have adopted sustainable life choices influenced by my work, including shifting to a plant-based diet and lifestyle, cycling to work to reduce their carbon footprint and buying from sustainable brands leaving behind fast fashion,” says Ranison.
Click here to view India's Top 100 Digital Stars

Tweets by @forbesindia
Ankur Warikoo—from space scientist to content creator
Photo of the day: When the sea gives back