Will Indian markets outperform in 2023?

Factors including valuations, inflation, weak currency and the upcoming general elections may make Indian equities less likely to outperform in 2023 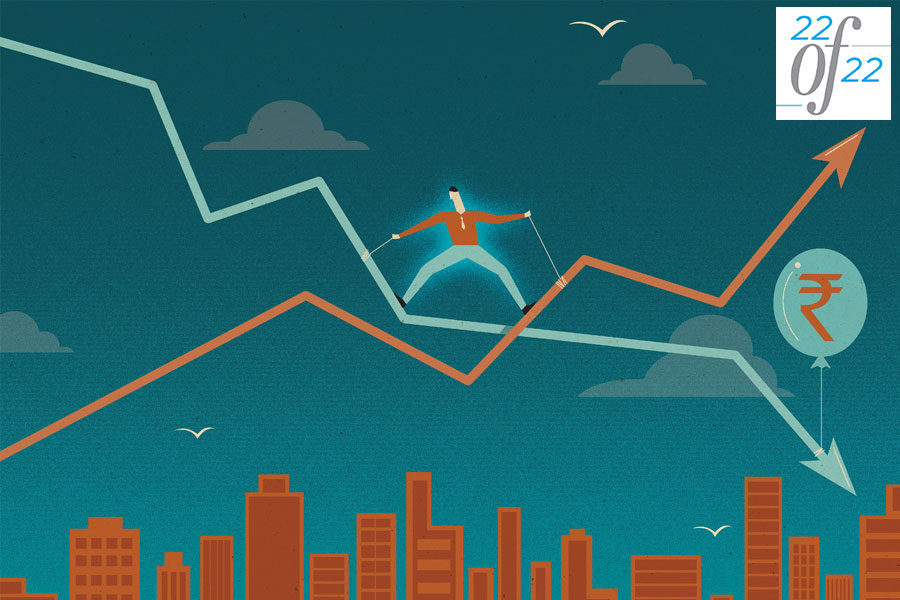 MSCI India is currently trading at 22 times forward price-earnings (PE), which is 30 percent above its long-term average of 16.7 times since 2004

Amid a challenging global macro environment, Indian markets are expected to outperform peers in 2023 but possibly at a slower pace, as reopening-of-the-economy boosts have faded and monetary tightening may further weigh on domestic demand. Analysts expect the new year to be bright for equities as bulk of the negative factors are behind us, but political jitters may impact markets in the second half of 2023 as India is headed for general elections in 2024.Emerging markets are likely to benefit from a relatively more benign world compared to 2022, but India’s trailing outperformance may slow down in the first half of 2023 due to relative valuations.

“The upcoming year will be intriguing from an investment standpoint because foreign investors will have to decide between investing in a market that is expensive but fundamentally solid or in a market that is cheap valuation-wise but may not be structurally sound,” says S Naren, ED and CIO, ICICI Prudential AMC.
Naren believes India presents a secular growth story unlike any other emerging or developed markets at a time when global central banks are on a quantitative tightening path. “Therefore, India continues to be one of the most expensive markets in the world, as a result of growing optimism around the Indian economy. There is also a possibility of recession rearing its head in several developed economies. Even if a global recession occurred, the impact on India is likely to be minimal,” he adds.
Historically, India’s equity market valuations have remained expensive and at a premium compared to the overall region. However, India’s valuations have not pinched analysts yet, as they are still not in an over-heated zone and appear to be priced in. MSCI India is currently trading at 22 times forward price-earnings (PE), which is 30 percent above its long-term average of 16.7 times since 2004.
Goldman Sachs analysts estimate the Nifty to hit 20,500 by the end of 2023, led by 15 percent earnings growth in 2023-24 and a modest valuation compression as light foreign positioning and geopolitical factors could support India’s multiples. Factors such as valuations, lingering cyclical issues of sticky core inflation, interest rate hikes, weak currency, better prospects for China and globally cyclical North Asian equities may make Indian equities less likely to outperform for the third successive year, according to analysts at Goldman Sachs.

“Looking forward to 2023, we think foreign flows could remain weak in India at the start the year as equity leadership likely shifts towards China/North Asia, but could pick up later in the year as domestic growth recovers in the second half, dollar likely reverses and the global macro environment improves spurring broad risk-taking in the region,” says Sunil Koul, executive director (Asia Pacific Portfolio Strategy, Global Macro Research), Goldman Sachs.
India saw a record outflow of foreign institutional investors’ (FIIs) money in the first half of this year. Since July, FII flows have reversed, with $11 billion inflows, leaving net $19 billion FII selling in the year, the second largest selling in the region after Taiwan. Domestic institutions (mutual funds, insurance) have net bought Rs 2.58 trillion in this year so far, fully offsetting the FII selling rout, to support markets liquidity.
“An up-trending profit cycle, a likely peak in short rates in the first half of 2023 and ebbing global macro risks relative to 2022 make the case for an absolute upside to Indian stocks. That said, India’s relative gains may take a breather in 2023,” says Ridham Desai, MD, Morgan Stanley India.
Assuming that the effects of the Ukraine-Russia conflict and elevated commodity costs do not spill over into 2023, domestic growth remains strong, the US does not slip into a protracted recession, supportive Indian government policies, and the RBI executes a calibrated exit of rate hikes, Morgan Stanley has set a Sensex target of 68,500 to December 2023. It has raised earnings per share (EPS) estimated by 5 percent and 7 percent in FY23 and FY24 respectively.
Indian markets have stayed resilient in 2022, mostly in the later part with both the Sensex and Nifty hitting record highs in December. Even as both rallied over 7 percent this year so far, the rally is not widespread, with most stocks struggling to stay afloat.
Analysts at HDFC Securities have a cautious view on the markets. “Nifty currently trades at 22.4 times FY23 EPS and 18.9 times FY24 EPS. We believe there is a downside risk to FY24 consensus earnings and a very limited scope of a valuation upside. This will keep upside for index capped, and at best it will move in line with the earnings growth,” the domestic brokerage firm says.

Tweets by @forbesindia
Photo of the day: The return of Covid-19
Understanding what it means to have protein in your urine