How long will India's shining economy hold amid the gradual global meltdown?

India is the bright spot in the global economy, but economists argue that the country is not decoupled from the world, and a 6 percent growth rate at a time when inflation is over 7 percent is worrisome 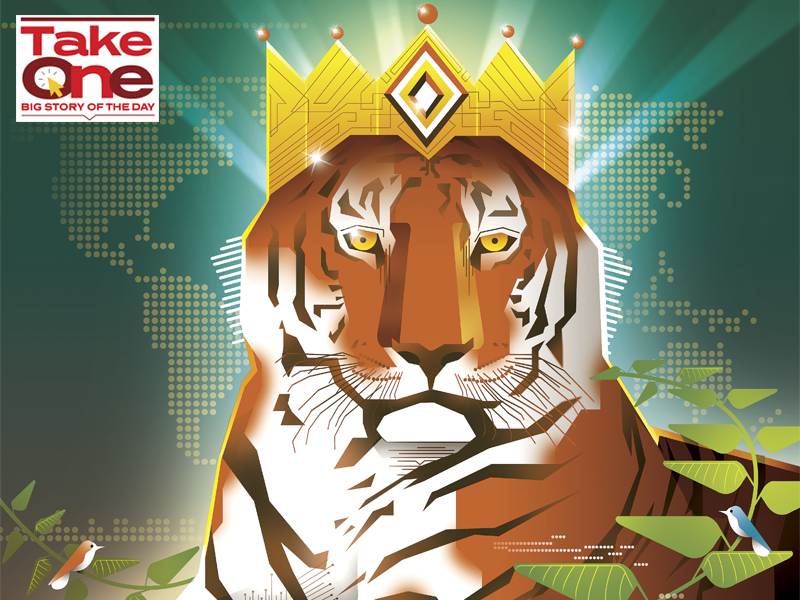 Several analysts and fund managers Forbes India interacted with are of the view that India will continue to outperform its peers. Illustration: Chaitanya Dinesh Surpur

A ‘synchronised’ recession has gripped the global economy. In its latest World Economic Outlook report, the International Monetary Fund (IMF) trimmed its 2023 global GDP forecast to 2.7 percent from 2.9 percent in July, but retained its world growth forecast for the current calendar year at 3.2 percent. “The worst is yet to come,” it warns.

The IMF predicts a third of the global economy will contract in the calendar year 2023, and cautions that the world’s engines of production and consumption—China and US—will continue to see a decline in economic activity. China is expected to limp to recovery, and grow at 3.2 percent this year, whereas the US economy is likely to remain flat at 1.6 percent. Few European countries may see their economies shrink in the coming quarters.

Most global banks and agencies have downgraded their growth outlook for India to below 7 percent. ‘A weaker-than-expected outturn in the period of April to June, and more subdued external demand’ have prompted the IMF to slash India’s FY23 GDP estimate to 6.8 percent from 7.4 percent earlier. The World Bank has cut its forecast by 1 percent to 6.5 percent, and the Citigroup has reduced it to 6.7 percent from 8 percent earlier.

The impact of the Russian invasion of Ukraine, a cost-of-living crisis stoked by stubborn inflation, and the slowdown in China have hit the global economy. Despite the grim outlook, India is the fastest-growing large economy in the world, and the jury is out on whether the country has decoupled from the world.

Several analysts and fund managers Forbes India interacted with are of the view that India will continue to outperform its peers. “India has emerged as a shining star in this calendar year with healthy outperformance amid varied global headwinds on macros, inflation, rates, currency and geopolitics,” says Gautam Duggad, head of research, institutional equities, Motilal Oswal. 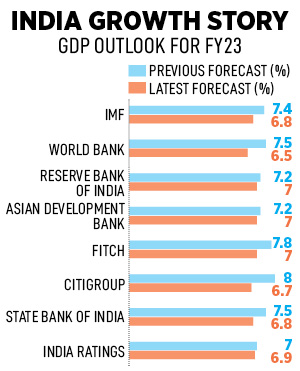 If equity returns is a benchmark, then India did outshine most peers in local currency terms. Most global equity markets fell between 20 percent and 25 percent in the current calendar year. Furthermore, domestic investors have held fort despite the prolonged spell of heavy selling by FIIs (foreign institutional investors) for nearly one year.

Duggad explains the outperformance is driven by strong corporate earnings growth over the past two years, resilience of Indian stock markets, and macroeconomic management by the government and the central bank.

The IMF has described India as a ‘bright spot’, ‘bright light’, which is ‘sure to leave a mark on the world’. Excluding Saudi Arabia, as per the IMF, India is the only economy that is likely to witness a GDP growth rate of over 6 percent.

But many economists argue that India is not decoupled from the world, and a 6 percent growth rate at a time when inflation is over 7 percent is worrisome.

Also read: Asia: Looking the US recession in the eye?

Suvodeep Rakshit, senior economist, Kotak Institutional Equities, notes, “No country is an island. A growing rhetoric of India decoupling from the rest of the world may not bear out.” Economists are concerned that the havoc in the global economy will hurt India’s macro-outlook over the next 18 to 24 months. 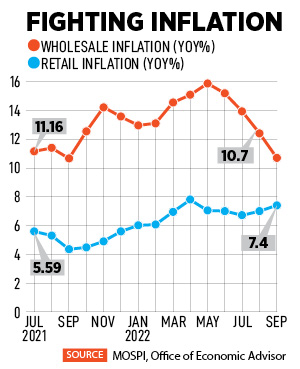 The risks are interconnected and have a cascading impact on the country’s fiscal health. The prolonged war between Russia and Ukraine has accentuated volatility of energy prices. The Indian rupee dived to a lifetime low of 83 against the greenback on Wednesday. In the coming months, the extent of the rupee depreciation and the central bank’s response will be critical. India’s foreign exchange reserves dipped by nearly $100 billion in calendar year 22.

Global growth is expected to remain anaemic. The US Federal Reserve is determined to rein in inflation with a series of rate hikes even at the cost of a looming recession. Undoubtedly, India is less vulnerable than its Asian peers, and better placed to face the impact than it was during the earlier periods of US recession. Yet, it isn’t immune to the ongoing upheaval in the global economy.

Robust domestic demand is the key defence against slowing global demand. However, economists point out that durable recovery is yet to pick up meaningfully, and it is essentially exports that helped boost the GDP to pre-pandemic levels. Clearly, a slowdown in exports will pinch consumption, and deter firms and small business owners from fresh investments. Kotak Institutional Equities says 45 percent of exports is driven by labour-intensive MSMEs (medium- and small-sized enterprises). 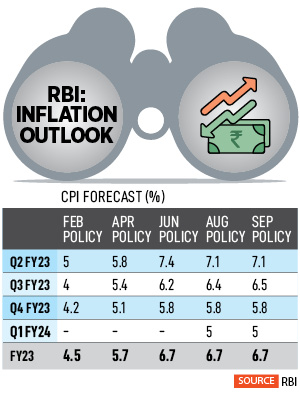 The US and the top five EU (European Union) nations account for approximately 30 percent of the country’s total exports. “A large part of the global exports is dependent on the US and Europe which, in turn, will have an indirect impact on India too,” adds Rakshit.

In the backdrop of a global slowdown, most analysts expect commodity prices to correct. However, the outlook for energy prices is uncertain at this juncture, and higher energy prices can erase the benefits of lower commodity prices and widen the trade deficit. The current account deficit is likely to rise to 3.9 percent in FY23.

Headline inflation has crossed the Reserve Bank of India’s (RBI) upper threshold of 6 percent for over 10 months. Rakshit points out that global factors have a bearing on the prices of nearly 15 to 20 percent of the CPI basket. Since April, the repo rate has increased by 1.9 percent to 5.9 percent. The Monetary Policy Committee has refrained from giving a forward guidance on rates, but has articulated that its top priority is to rein in inflation.

While the odds are hard to ignore, given the gradual slide in several macro parameters, markets are confident about India’s growth story. However, in a volatile global environment, there are multiple moving parts weighing on the fiscal health of India. The government and the RBI have their task cut out.

Tweets by @forbesindia
Football in India: What will it take to put the spotlight on players?
Why law enforcement struggles to throttle crypto scams