The authorities in the European Union and the United States—the leaders on crypto control—have relentlessly focused on aspects of crypto crime related to terrorist financing, money laundering and sanctions busting. But there's lack of action against low-level scams and firm directions from the top brass 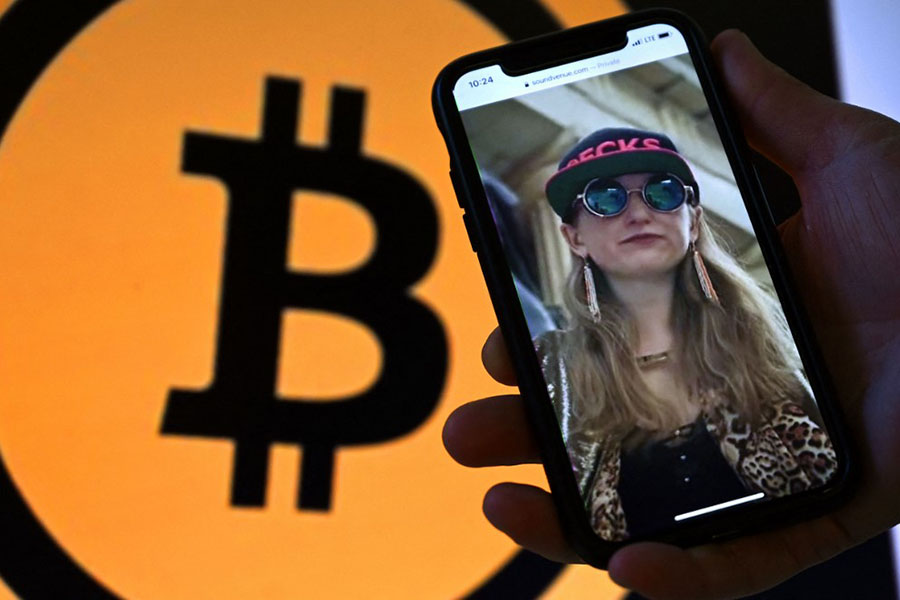 This illustration photo shows Heather Morgan, also known as "Razzlekhan," on a phone in front of the Bitcoin logo displayed on a screen, in Washington, DC, February 9, 2022. A couple accused of seeking to launder the bitcoin were arrested in New York, the department said. Ilya Lichtenstein, 34, and his wife Heather Morgan, 31. Image: Olivier DOULIERY / AFP

Under the headline "Scammers in Paris", an online sleuth known as ZachXBT published a blog in August detailing how a pair of youngsters stole cryptoassets worth millions.
Much to his surprise, the French police announced last week that they had acted on his tipoff and charged five people.
It was the first time his sleuthing had led to police action, ZachXBT told AFP, despite having investigated $250 million worth of crypto scams and thefts and chronicling them for his 300,000 Twitter followers.
One explanation for the lack of action is that low-level scams are not a priority.

The authorities in the European Union and the United States—the leaders on crypto control—have relentlessly focused on aspects of crypto crime related to terrorist financing, money laundering and sanctions busting.
Arrests have been rare at federal level in the US—the Department of Justice's specialised unit charged only eight suspects in the first half of this year.
US federal agencies have often concentrated on headline-grabbing suspects like Heather Morgan, an amateur rapper nicknamed "Razzlekhan" who was charged with money laundering in February, and more recently reality TV star Kim Kardashian, who was fined this month for illegally promoting a cryptocurrency.
Yet the specialist crypto firm Chainalysis said more than $3.5 billion had been lost to scams and hacks between January and July.
AFP contacted police departments and crime agencies in Europe and the United States but none could give figures for clear-up rates or charges for crypto-related crime.

The sheer scale of the criminality proves difficult for law enforcement agencies already lacking resources for financial crime.
Chainalysis is one of several firms rushing to fill the gap in expertise, selling its tools and services to agencies including the New York police.
Former New York police chief Terry Monahan told a recent Chainalysis event that before he stepped down last year officers would face three cryptocurrency cases every day.
But they had no way of investigating, so the cases would be closed.
"The victim was left with nowhere else to go," he said, pointing out that federal agencies were only interested in cases worth millions.
Another part of the problem is the direction from the top.
The focus on terrorism and sanctions busting comes as regulators struggle to decide if cryptoassets are securities or commodities.
Also read: Cryptocurrency: Is there hope beyond a dark winter?
If they plump for securities, crypto companies would face so much regulation and fines that the sector could be decimated.
Omid Malekan, a professor at Columbia University, said the manoeuvring by US agencies could be seen as "their fear of what a crypto-centric future might mean for US power at home and abroad".
If decentralised crypto networks revolutionise finance, US politicians would no longer be able to project power in the way they do now with the dollar and the banks.

With Washington and Brussels focused on high-value targets, victims of low-level fraud are often left high and dry.
Some end up asking ZachXBT for help, and he has recovered funds for them.
"I would say there is very little law enforcement in the crypto space," he said, adding that China was particularly unresponsive to his investigations.
But he said US authorities at least were taking more notice of lower-level scams.
Scams have become harder to ignore since crypto lender Celsius went bust owing $4.7 billion to investors.
Also read: Cryptocurrency sceptics look to bend the ear of regulators
Many of those who lost out were ordinary folk sold on the idea of quick and easy profit.
Their testimony to regulators—pensioners robbed of their life savings, small investors left contemplating suicide, farm owners who lost their livelihoods—reset the image of a typical crypto-scam victim.

Monahan and Malekan both reckon law enforcement is slowly getting a grip.
Monahan hailed the tracking technology supplied by the likes of Chainalysis for allowing some funds to be returned.
"At least we got something back for (the victims), we didn't just take that case and toss it into the trash," he said.
And Malekan says increasingly sophisticated tools are helping to unmask scammers despite the much-vaunted anonymity of the blockchain—the digital ledgers where all transactions are stored.
"Once a single participant is unmasked," said Malekan, "their on-chain history becomes a treasure trove of data for chasing down their entire network".
However, the damage of years of lax enforcement will be difficult to unpick.
"I do think lack of enforcement encourages and emboldens the scammers," said Molly White, whose project "Web3 is going just great" chronicles some of the most outrageous scams and thefts in the crypto world.
"I think it has contributed to a perception that crypto hacks are basically risk-free and high reward, which many of them have been."
By Joseph BOYLE and Daniel Hoffman
© Agence France-Presse​