Torn between the desire to access China's vast markets and condemnation of its rights abuses and aggressive regional policies, the 27-nation bloc has traditionally struggled to fashion a cohesive approach towards Beijing 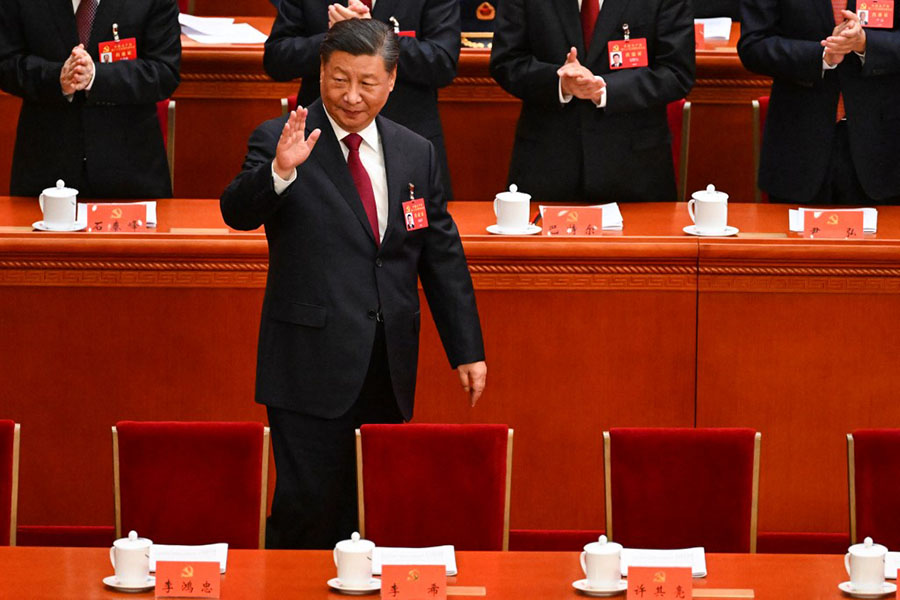 China's President Xi Jinping waves as he arrives for the opening session of the 20th Chinese Communist Party's Congress at the Great Hall of the People in Beijing on October 16, 2022. Image: Noel Celis/AFP

Partners, competitors or rivals? European Union leaders are debating whether to rethink their stance on China as President Xi Jinping tightens his grip over an ever more assertive Beijing.
A two-day summit in Brussels from Thursday will be dominated by the fallout of Russia's war on Ukraine and Europe's soaring energy prices, but ties with the world's second-largest economy will also loom.

"In the light of the current geo-political context, we need to hold a strategic discussion on China," European Council chief Charles Michel wrote in his invitation.
Leaders must establish "how we wish to frame this critical relationship in the future," he added.
Torn between the desire to access China's vast markets and condemnation of its rights abuses and aggressive regional policies, the 27-nation bloc has traditionally struggled to fashion a cohesive approach towards Beijing.
Keen to cover all bases, the EU has dubbed Beijing a "cooperation partner", "economic competitor" and "systemic rival" all at the same time.
Now some are arguing that approach needs to stiffen as Xi pushes a more confrontational line with the West as he stands on the cusp of securing a third five-year term at the Communist Party Congress.
"The message that China is sending out today is a message of competition," EU Foreign Policy chief Josep Borrell said after the bloc's foreign ministers discussed the issue on Monday.

EU-China relations have been tense since a major investment pact was put on ice last year after Beijing angrily hit back at sanctions over its treatment of the Uighur minority in Xinjiang.
The EU's diplomatic service this month circulated a strategy paper, seen by AFP, that looked to balance the need to "speak, work, trade and negotiate" against pushing back on Beijing.
"Management of the EU-China relationship will be a key determinant of the EU's future economic and geostrategic security," it said.
One key area of cooperation remains the fight against climate change as there is recognition that progress can't be made without the globe's largest polluter on board.
But there are far more major areas of frustration and concern over Beijing's stance.
Many are worried by China's warm ties with Moscow and angered at its failure to come out against the war in Ukraine.
"China cannot just stay on the sidelines — it is the second global power," said one European diplomat. "It has to play a role in protecting, preserving or at least trying to maintain the principles on which this world order is founded."
Fears are also high over Beijing's belligerent vows to "reunify" Taiwan and the EU foreign service has urged member states to warn China of "possible consequences" if it seeks to take control through force.

Chastened by the chaos caused by its reliance on Russia for energy, the EU is keen to ensure it doesn't fall into the same trap by becoming dependant on China for critical raw materials and technologies.
Also read: EU plan to cut gas use by 15% comes into effect
"Now we are talking about our dependency, vulnerability from Russian gas. We have to avoid creating new ones," Borrell said.
But that will be easier said than done.
"China has just got its hands on the cobalt reserves of the Democratic Republic of Congo and holds 85 percent of the rare earths in the world," said Elvire Fabry, an analyst for the Jacques Delors Institute.
Some within Europe have pushed for the bloc to side closer with the United States as successive administrations there take a far tougher line on confronting Beijing's growing might.
But others insist that the EU needs to tread its own path and not be too reliant on Washington.
"We need to get out of these dependencies, not substitute them with other dependencies," said another European diplomat.
One thing is clear, EU officials insist, the bloc must remain united in its stance towards Beijing.
For a 27-nation grouping with disparate economic and political demands, that is often far from easy.
An early test could come soon with speculation that German Chancellor Olaf Scholz and French President Emmanuel Macron might be planning separate trips to Beijing.
"The EU and member States should prevent and isolate China's attempts to apply its divide et impera (divide and rule) tactics," the bloc's diplomatic service said.