22 for 2022: The big trillion-dollar tech meltdown

Experts expected tech demand will remain as strong as it was during Covid but that belief quickly came undone, and 'big tech' lost trillions of dollars in market value 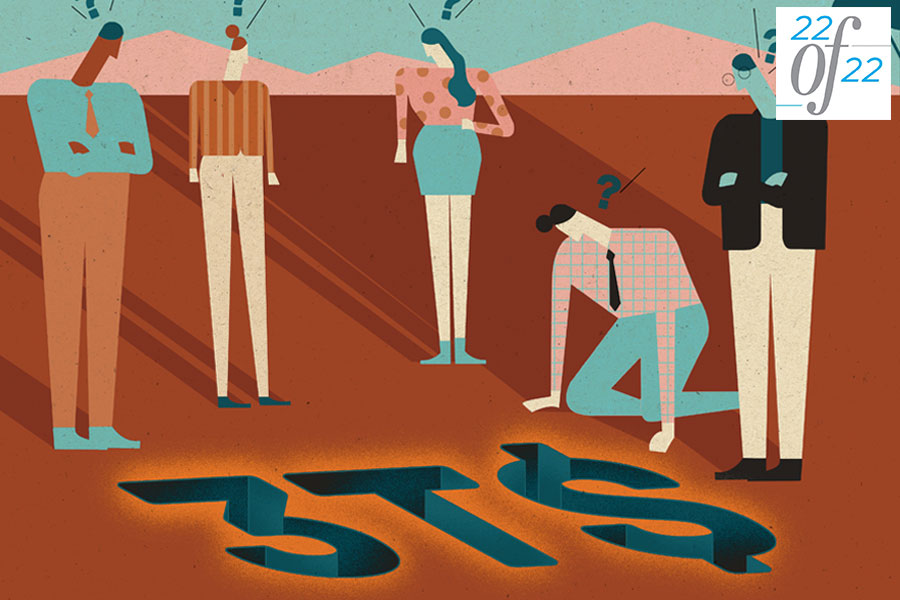 Tech stocks led a rout in the world’s biggest stock markets in 2022. Illustration by Chaitanya Surpur

In the world of tech, 2022 was the year when the world’s biggest technology companies lost trillions of dollars in market value. Coming on the heels of the disruption to the global economy from the Covid pandemic, Russia’s invasion of Ukraine, rising inflation—and, as a result, central banks beginning to raise interest rates—all had investors worried.Escalating tensions between the US and China was another concern.Tech stocks led a rout in the world’s biggest stock markets in 2022.

By mid-October, seven of the biggest tech companies, of which Facebook, Apple, Amazon, Netflix and Google, sometimes referred to as FAANG, plus Tesla, had lost more than $3 trillion in their combined market value. Google and Microsoft had lost roughly $700 billion each, and Facebook, now Meta, $600 billion.About a month later, it got worse, with Amazon becoming the first public company—not just a tech business—to lose a trillion dollars in market value. Bloomberg reported on November 12 that the ecommerce and cloud computing giant’s market value had gone from $1.88 trillion to $879 billion. Microsoft wasn’t far behind, having lost $889 billion, Bloomberg reported.

Meta Platforms CEO Mark Zuckerberg on November 9 announced the company is laying off 11,000 employees, accounting for about 13 percent of its workforce, in a cost-cutting measure. This “last-resort” measure became necessary because the prediction, at the beginning of Covid, that the accelerated shift to online would be permanent, turned out to be wrong, Zuckerberg said in a blog post.“Not only has online commerce returned to prior trends, but the macroeconomic downturn, increased competition, and ads signal loss have caused our revenue to be much lower than I’d expected. I got this wrong, and I take responsibility for that,” he said.In the second week of December, as this copy goes to print, those market values aren’t much different. Meta Platforms, Facebook’s parent company, has lost two-thirds of its value from the beginning of the year. Tesla, for example, was lower as of December 7, than in October—the company has seen recalls in China and CEO Elon Musk is also running Twitter, which he purchased.Only Apple, is relatively unscathed, as demand for its entire product portfolio remains strong, while Covid-related disruptions to manufacturing in China have hurt its sales. The company had lost about 22 percent of its market value as of December 7, from the beginning of the year.In India too, the biggest tech names, the top IT services companies, all saw their market caps eroded. The share price of the biggest company, Tata Consultancy Services, for example, fell from more than Rs 4,000 on January 17 to less than Rs 3,000 on July 15. Infosys, the next biggest, lost more than a quarter of its value in roughly the same period.Also read: Layoffs hit Silicon Valley as Meta plans to cut workforce
The stocks have recovered somewhat, because, despite clients looking to tighten spending, demand for their services continued to be strong.“While concerns around the economic outlook persist, our demand pipeline is strong as clients remain confident in our ability to deliver the value they seek, both on the growth and efficiency of their businesses,” Infosys CEO Salil Parekh said in a statement on October 14, releasing the company’s fiscal second-quarter results.

As a result, Infosys was raising its revenue guidance for the full year that ends on March 31, 2023, he said.Overall, the IT services stocks are still trading between about 12 percent (TCS) and 43 percent (Wipro) lower, from the beginning of 2022, at close of Mumbai trading on December 7. And the current quarter’s numbers and the companies’ commentary on the outlook for 2023 are keenly anticipated,