From his early days as a thrash metal guitarist, to building gigantic installations at the NH7 Weekender, and more, this 29-year-old designer has come a long way 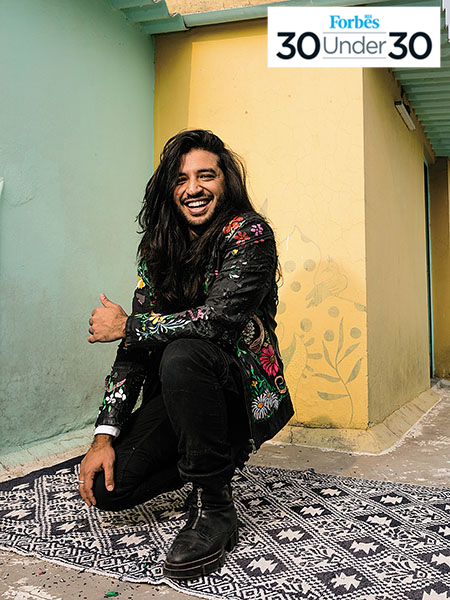 In school, Aaquib Wani preferred music and art over academics. He was the lead guitarist of a thrash metal band, Phobia, and commanded an impressive following.

The self-taught experiential designer graduated from designing the identity and posters for his band to designing album covers and merchandise for other bands that approached him. He later landed a job as an intern, working his way up to become art director with music magazine Rock Street Journal.

The year 2014 marked the end of Phobia and a turning point for Wani when he joined design studio Scenografia Sumant. Coming from a print design background, he was initially overwhelmed by the scale, range and complexity of imagery required from him for different projects and spaces. He learnt the value of not just 2D but also 3D design.

“He engaged with the work quickly with tenacity and persistence and soon mastered working in the different scales of work. From stage backdrops, flooring designs, wallpaper designs, logos, menu designs, filigree designs for metal laser cutting to designs for linen at the studio, he did it all with a sense of humour, and with resilience in response to the exactness demanded of him,” says scenographer Sumant Jayakrishnan, founder of Scenografia Sumant.

In 2018, Wani ventured out on his own to start Aaquib Wani Design. “Its primary focus is to incorporate technology as a crucial element of experiential design to take design to another level. The studio specialises in creating original interactive installations, transforming spaces, and branding while emphasising sustainability as the underlying theme running through all the designs,” says Wani.

His flamboyant and unfettered approach to design has impressed clients and thousands of followers on Instagram. His repertoire ranges from creating limited edition hand-painted customised jackets for international brands such as Levi’s, Adidas and Gas to designing the craft mela bazaar for Isha Ambani’s wedding, building gigantic installations on a hilltop for the NH7 Weekender and creating a space-themed anti-gravity experience for the launch of Adidas’s Ultraboost 20 sneakers, in addition to working with Coca-Cola, United Nations and MG Motors.

“Aaquib has a hunger to learn and the ability to expand the horizons of his world,” says Jayakrishnan.

Tweets by @forbes_india
FrontRow: Enabling Indians to learn from the best
In Myanmar, a cult of personality meets its downfall