Value creator: How Avanti Feeds continues to grow at 60% annually

A strategic shift in product and a tie-up with a global major have seen the fortunes of Avanti Feeds rise phenomenally, along with India's shrimp exports 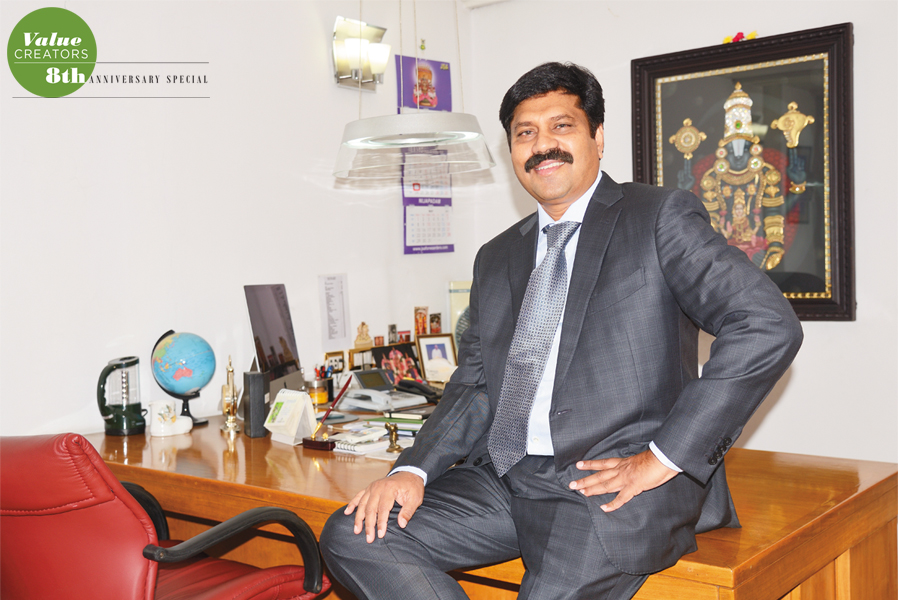 Indra Kumar, chairman and MD, Avanti Feeds, is known to keep his ear to the ground
Image: P Anil Kumar for Forbes India

In 2008, when the global economic crisis began to eat into the prices of goods and commodities worldwide, one of the sectors affected was that of global shrimp exports. Southeast Asian nations, such as Thailand and Vietnam, were the biggest players in the market at that time, although their shrimp production had been plagued by disease and low yields. India also exported shrimp—it was the largest exporter of black tiger shrimp—annually to markets such as the US and Europe, but it was no match for its Southeast Asian rivals. Following the economic downturn, India, too, began to feel the pressures of the consequent fall in demand.

But a move by the government of India in 2009 changed all of that, and the future of shrimp farming in the country. In 2009, following much lobbying by the country’s shrimp industry and subsequent pilot projects, the government allowed the commercial cultivation of a new variety of shrimp—the whiteleg shrimp, also known as the Pacific white shrimp (Litopenaeus vannamei), is native to the eastern Pacific coasts and Latin America—that grows faster, is more resistant to disease than the black tiger shrimp, and is more lucrative to cultivate.

As the shrimp industry in India reoriented itself to this new reality, taking full advantage of it was Avanti Feeds, which had been manufacturing feed for shrimp cultivation in India since 1993 and had a market share of 7 percent. “It was a year when we did take a lot of crucial decisions that worked very well for us in the future. But the biggest one was basically convincing the farming community to get into the cultivation of vannamei shrimps,” says Alluri Indra Kumar, 55, chairman and managing director of Avanti Feeds, which was set up by his father Venkateswara Rao in Visakhapatnam. Apart from shifting focus to a new variety of shrimp, 2008-09 was also when Avanti Feeds expanded into Gujarat, adopted a customer-focussed marketing strategy, and moved away from a credit-based sales system. 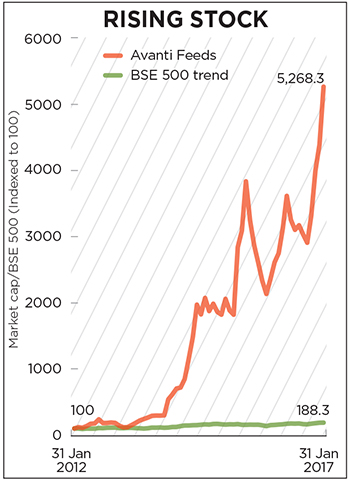 In 2008, Kumar also decided to expand to Gujarat, to cater to shrimp farmers along the west coast, by setting up a 50,000-metric tonne feed manufacturing plant at Pardi in Valsad district, at a cost of Rs 40 crore. Most other feed manufacturers had their plants in Andhra Pradesh and Tamil Nadu. The company’s other plants are based in Kovvur, Vemuluru and Bandapuram in the West Godavari district of Andhra Pradesh, and have a total capacity of 4 lakh metric tonnes.

Today, Avanti Feeds has a market share of 50 percent from 25 percent in 2008. Over the last five years, the company has grown by 45 percent annually against an industry growth of 15 percent. In FY16, its revenue stood at Rs 2,018 crore, with net profits of Rs 155 crore. Almost 80 percent of its revenue comes from feeds, while the rest comes from export of processed shrimps to the US and Europe. The company has a return on capital employed of 66 percent. “I was certain that we needed to get into vannamei [feed manufacture] and our tie-up with Thai Union helped us tremendously,” says Kumar.

The cultivation of whiteleg shrimp has met with such success in India that its production is expected to touch 4.5 lakh tonnes in 2017, from 10,000 tonnes in 2010, according to the Marine Products Exports Development Authority. This, while the production of black tiger shrimps, which was at 50,000 tonnes in 2009, was eventually stopped by 2015. According to industry publication Aquaculture, India has become the second largest whiteleg shrimp producer in the world, second only to the US, with Andhra Pradesh accounting for the bulk of the production.

Avanti Feeds’ role in this phenomenal growth has been to help farmers feed and breed as many shrimps possible within the same area, as well as reducing the feed conversion ratio (the amount of feed given to the shrimps compared to their increase in weight). At present, 1.5 kg of feed generates 1 kg of shrimps; the company is trying to generate the same amount of shrimp with 1.2 kg of feed. But achieving this target is easier imagined than done, with the feed being a well-researched and finely balanced mix of dried fish powder, deoiled soya cake and white flour. Thai Union is involved in the formulation of this feed.

The company is also working towards reducing the cost of the feed. “Feed is the single largest head of expense for the farmers. Earlier, this expense was around 55 percent [of the total cost], which we have brought down to 45 percent over the last eight years,” says Kumar.

The success of Avanti Feeds can be credited to Kumar because of his ability to keep his ear to the ground, and chart a course of action for the company: He likes to plan ahead for the next three years, take feedback from employees irrespective of their ranks, and prepare a deadline schedule that has to be adhered to. He, in fact, lives on the campuses of the company’s plant so that he can work closely with his team.
A chemical engineer by education, Kumar joined Avanti Feeds as a director, when the company was incorporated in 1992, and is the kind of businessman who visits his end-customers to understand their requirements. It is this characteristic that has helped his marketing team, which doubles as a technical support unit. They visit around four farmers every day, and apart from resolving their queries related to shrimp feeds and breeding, gather information on their requirements that can then be implemented by the company.

The marketing team is also sent for regular training sessions—it includes techniques and innovations in farming—with Thai Union. “Since technology changes all the time, we need to help update the farmers about these changes because there will be new problems in terms of diseases and breeding every year. Our team is now well trained to handle this,” says S Mohanty, deputy general manager, marketing and retailing. This focus on customers was adopted by the company in 2009. “Once the farmer is successful, we are successful,” says Kumar.

Farmers also benefited when Avanti Feeds changed its payment methods, by moving away from a credit-based system to a cash-based one. Before 2008-09, the company sold its feed to dealers on credit, who, in turn, would sell it to farmers on credit and charge an interest. In 2008, when export demand fell, a large amount of money was stuck with farmers who could not pay the dealers, thus increasing the pressure on the company’s working capital. “That was when we decided on only-cash sales. It was one of our best decisions, which is reaping rewards even today,” says PV Rajsekhar, deputy general manager, finance. When the company moved to a cash-based payment system, not only did it discipline the market and reduce the pressure on its working capital, it also meant that farmers didn’t have to pay any interest to the dealers.

Today the company’s sales to working capital ratio is 15, showing that the company does not have any credit stuck in the market. Other companies in the same business have very high working capital, and their money is stuck in the market for more than 50 days, say industry analysts. In 2010, Avanti Feeds implemented enterprise resource planning solutions, which connected all the departments, with constant checks and balances in the system. “We have got our finances right. What is now important is to expand the business into newer products. We are looking at processed food in this regard,” says Kumar.

In 2015, Avanti Foods set up Avanti Frozen Foods, with a 40 percent equity from Thai Union, and is working on a new shrimp processing plant in the village of Yerravaram in East Godavari district of Andhra Pradesh, focussed on exports. Kumar is also looking to cultivate sea bass, a protein-rich fish that has a strong demand in the export market. “One of the best things to do is to get into newer species of fish. That is the way we can expand the market,” he says.

The growth of his company has not gone unnoticed in the stock market. The stock is traded at a P/E multiple of 24 times, and has a market capitalisation of Rs 3,400 crore. “Avanti Feeds has doubled its capacity every few years and still the demand for its product is very high. The company is efficiently managed and has grown at a very fast rate,” says Ayush Mittal, who invested in the company seven years ago, when the stock price was around Rs 35. It was a 100-bagger pick for Mittal who says he likes to buy the stock on every opportunity.

There is little doubt that others like Mittal would be reaping rich dividends through their association with Avanti Feeds.

Tweets by @forbesindia
NPA Ordinance: Bankers cheer but there are unanswered questions
La Opala: From near-anonymity to near-dominance in just under three decades