La Opala: From near-anonymity to near-dominance in just under three decades

A pulse on consumer needs, an ability to take risks and constant innovation have catapulted La Opala from a small family-run entity to a Rs 250-crore business

Their success notwithstanding, the Jhunjhunwalas—Ajit, Nidhi and Sushil (left to right)—are keeping a watchful eye on the future
Image: Subrata Biswas for Forbes India

A gleaming display of La Opala’s latest products—dinner sets as well as cups and saucers—is hard to avoid at the company’s headquarters in Kolkata. As the April sun streams through the large windows of the conference room, a neatly arranged row of milky white opal glass dinner plates, held up on stands, sparkle in the light.

As India’s first and largest manufacturer of crockery made from opal glass—an opaque, heat-resistant material made white from the addition of bone ash—La Opala derives its name from the glass it produces. “We added a ‘La’ because opal glass was first produced in France and we wanted to establish a French connection,” says Ajit Jhunjhunwala, 46, the second-generation scion of the Rs 256 crore (by revenue) business.

He points towards a set of square-shaped plates and bowls, also on display in the conference room. ‘Quadra’, the company’s latest collection of tableware, targets a younger, more chic user and stays with the company’s tradition of constantly innovating, he says. Nidhi, executive director and Ajit’s wife who looks at marketing, adds that while the company’s target audience has traditionally been females aged 35 to 45 years, La Opala is now going after a younger demographic. “They are the influencers. They are our future,” she says. 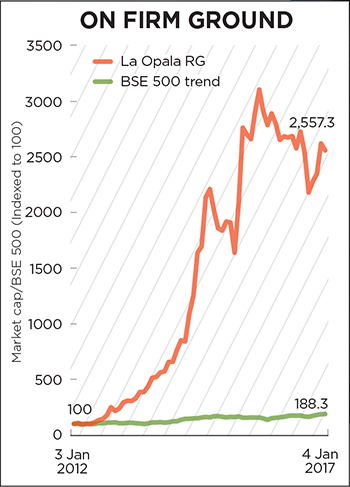 It is with this eye on the future that La Opala has grown from a small family-run outfit to a National Stock Exchange-listed player with a market capitalisation of Rs 2,900 crore in under three decades. Revenues in FY16 stood at Rs 256 crore, up 10.5 per cent over the previous year, while net profit firmed to Rs 58.7 crore, up 28.9 per cent over FY15. From near-anonymity in the late 1980s, when La Opala started off, to near-dominance today (the company commands a 60 percent share of the Rs 360-400 crore opal and glassware market according to brokerage Nirmal Bang Securities) what has led La Opala to catapult ahead so remarkably?

In the late 1980s, Ajit’s father Sushil Jhunjhunwala, 67, decided to break away from his family business of producing recycled glass used to make cups for roadside tea stalls, and go it alone. In 1985 on a visit to South Korea, he came across crockery made from a milky white glass, or opalware. “Such a product was not available in India. I knew there was an opportunity there,” he recalls. He swiftly returned to India to conduct market research, found it to be positive and returned to South Korea to find a technical partner. An agreement was struck with Hosan Glass and in 1988 Sushil set up a small factory in Madhupur, now Jharkhand, to manufacture opal glass in India for the first time.

The capex to set up the factory was minimal—about Rs 1.5-2 crore—but the risk was substantial. “In the late ’80s crockery was more like a commodity,” says Ajit, who is joint MD, La Opala RG. Branding, packaging or advertising of crockery was unheard of. Partly because Indians traditionally used stainless steel tableware. La Opala was the first to come up with novel designs, proper packaging and full-fledged marketing campaigns. “When we launched, people thought it was a foreign product. It was well accepted,” recounts Sushil, who serves as vice chairman and managing director at La Opala. The company turned profitable in 1991 and also ventured into exports that year.

“Their products are aspirational in nature. The middle class that has traditionally used steel crockery has taken to La Opala well,” points out N Chandramouli, CEO of brand consultancy TRA Research. In 1995, the Jhunjhunwalas opted to list on the NSE to fund the expansion of a new plant. A year later, that factory, also in Madhupur, was established and Solitaire, a range of 24 percent lead crystal glassware made in technical collaboration with South Korea’s Doosan Glass, was introduced.

In the years that followed, La Opala sailed along posting revenues of about Rs 50-60 crore. But the Jhunjhunwalas were hungry for more. “Our challenge was that we weren’t able to scale up the business,” says Ajit. Our opal glass plants were semi-automatic and crystal making involved a hand-cut, mouth-blown process that was undertaken by artisans.

The inflection point in La Opala’s trajectory came when the Jhunjhunwalas took the bold decision of setting up a fully-automatic opal glass plant. Bold because La Opala was a Rs 50 crore company at that time and the cost of the proposed greenfield plant was an audacious Rs 40 crore. “It was a huge risk. But we knew that if we didn’t take the risk we would stagnate in the long run,” says Ajit. Through debt and internal accruals the company went ahead with its plan, leveraged the latest European technology and established a fully-automated plant in Sitarganj, Uttarakhand, in 2007. “La Opala’s growth started picking up after 2007. The setting up of their fully-automated facility helped reduce manufacturing cost, leading to improved margins,” says Sara Jaffer, research associate at Nirmal Bang Securities.

Margins also improved because La Opala used its new plant to launch a premium offering of tableware under the brand name ‘Diva’. Offered at a 20-25 percent premium to the company’s existing range of ‘La Opala’ branded tableware, Bollywood actor Bipasha Basu was roped in to endorse ‘Diva’. A flurry of ad campaigns, both television and print, followed. Advertising as a percentage of sales have jumped from about 4 percent in FY08 to about 13-14 per cent today.

La Opala has now ended its association with Basu, but continues to aggressively advertise on television and in print. “The product is our hero now. We don’t need a celebrity to endorse our products anymore,” says Nidhi.

Dealers and distributors echo her sentiment. “La Opala is a world-class product,” says Pranab Nandy, a Kolkata-based dealer who claims to sell about Rs 2-2.5 crore worth of La Opala products every month. “The products fly off the shelves, especially during festive seasons,” he adds. To meet the growing demand, the company increased the Sitarganj plant’s capacity from 4,000 metric tonnes per annum (mta) to 8,000 mta, and most recently to 16,000 mta.

“For the price of one Corelle dinner set, you can get two or even three La Opala dinner sets. It is a top-class product at affordable prices. That is what customers like about their products,” says another dealer based in Mumbai’s Crawford market area. While premium offering Diva contributes about 70 percent to La Opala’s topline, the mass-market La Opala brand contributes 20 percent and Solitaire 10 percent. “Their multi-brand strategy helps them to reach out to different segments of consumers,” says Jaffer.

In 2007, La Opala, then just a Rs 50 crore company, set up a Rs 40-crore, fully-automatic plant. The risk has brought many rewards

Moreover, La Opala’s robust network of 225 distributors and 12,000 retail partners across India have further cemented its brand visibility and recall. While this traditional channel constitutes the bulk of sales, modern retail comprises about 8 percent and ecommerce accounts for about 4-5 percent. Exports account for about 15 percent of the company’s sales with the Middle East, Asia, Africa and Latin America being key markets.

While upmarket overseas players like Corelle, Luminarc and RAK aren’t treated as competition by La Opala, low-cost imports from China are a looming threat. In FY11 India introduced a five-year anti-dumping levy for imports from China and the UAE. This came under review in FY16 and has been extended until August this year. If it is revoked it could threaten La Opala’s market leadership, as Chinese imports are 10-15 percent cheaper. However, analysts are confident. “They have so much brand recall and a strong distribution network that I don’t think it will be a problem even if the levy is revoked,” says Jaffer.

Even so, the Jhunjhunwalas are keeping a watchful eye on the future, just as they have in the past. After all, they’re in the business of not just capturing market share, but creating it. “Whatever goes on the table —be it glass, melamine or steel—is competition for us,” says Ajit, “and we’re ready to take it on.”