Nine beneficiaries: Sectors that stand to gain from 9% growth

However, that will be sustainable only if agriculture and allied sectors become active participants in, and major beneficiaries of, the growth story 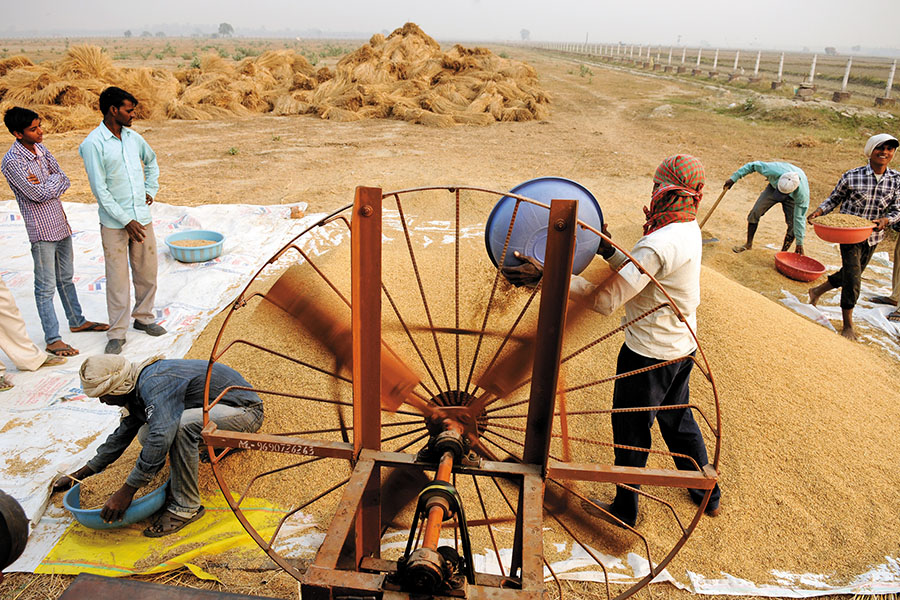 A green spell in the agrarian economy will spill over into higher incomes for the urban economy
Image: Burhaan Kinu / Hindustan Times via Getty Images

As far as India’s economy goes, the proverbial rising tide lifts all sectors. However, not all sectors rise equally. Between 2005 and 2008, when growth in the country's Gross Domestic Product (GDP) averaged above 9 percent, the industry and services sectors grew in high-single or double-digits. In the agricultural sector, however, there was a relative dry spell (See chart).

India’s failure to cling on to the high headline growth witnessed in the mid-noughties is proof of the unsustainability of non-inclusive growth. (“Growth for the sake of growth is the ideology of the cancer cell,” wrote American essayist Edward Abbey.)

Samantak Das, chief economist & National Director at real estate consultancy Knight Frank, says high single-digit growth that is sustainable will come when the “bottom of the pyramid” (read rural sector) becomes an equal partner in the nation’s growth prospects. He believes the revival of agriculture growth will be instrumental in achieving sustainably high GDP numbers. Das sees companies that have a stake in the growth of the rural economy becoming major beneficiaries if India clocks 9 percent GDP consistently.

Sahil Kapoor, chief market strategist at Edelwiess Investment Research, too, is bullish on rural-focussed sectors. "[Expected] normal monsoon, hike in MSP and higher budgetary allocation for rural expenditure indicate revival in rural economy. India is a consumption-based economy. In the consumer space, rural-focussed sectors are expected to do well.”

Das, who had a decade-long stint at the National Council of Applied Economic Research, says a green spell in the agrarian economy will also have spillover effects and the resultant higher incomes will spur bigger consumption in the urban economy, such as in the real estate sector.

The role of consumption in furthering sustainable growth is also stressed by Manishi Raychaudhuri, Asia-Pacific Equity Strategist at BNP Paribas. “India’s GDP largely comprises private consumption (over 50 percent) and investments (around 30 percent). So, if India achieves high single-digit growth consistently, several sectors related to both investments and consumption shall have to grow in double digits.” Raychaudhuri adds that, historically, periods of strong economic growth have been associated with strong revenue growth in domestic sectors—industrials, consumer discretionary, banks and building materials.

At many of the country’s brokerages, a bet on domestic themes is already afoot. At HDFC securities, VK Sharma, head-PCG & capital market strategy, says his firm is bullish on the “formalisation of the Indian economy”. Companies that are currently operating in largely unorganised sectors stand to gain when these sectors become organised, he says. His firm also has bets on businesses that are in sectors currently plagued by low levels of penetration and are focussed the domestic economy.

Amit Shah, CEO at IIFL Asset Management Company, is also upbeat about companies that are domestic-focussed. “The tailwinds are in favour of the Indian economy with genuine micro-level changes such as GST [Goods and Services Tax], RERA [Real Estate (Regulation and Development) Act], and financial inclusion,” he says. Higher infrastructure spending and domestic consumption, he adds, will give a fillip to businesses that are invested in the domestic economy.

The equity markets have taken cognisance of the above themes. “Stock market cycles precede the earnings cycle, which itself precedes GDP growth. So a recovery in earnings cycle talks about an impending recovery in the economy. NBFCs and MFIs were among the most hit during demonetisation. We believe the cycle or the outlook has definitely improved from there on,” says Edelwiess’s Kapoor.

IIFL’s Shah also points to the recent improvement in companies’ earnings to support his faith in the domestic economy. He says his fund house is more confident of large-cap stocks benefiting from better domestic sentiments as “valuations in the mid- and small-cap space are high”. IIFL AMC recently launched the IIFL Capital Enhancer Fund-Series 1 that invests in 25 large-cap companies that are part of the Nifty 50.

Against this backdrop, based on expert inputs, Forbes India has collated a list of nine sectors that are primed for take-off if India’s GDP grows at a sustained 9 percent. 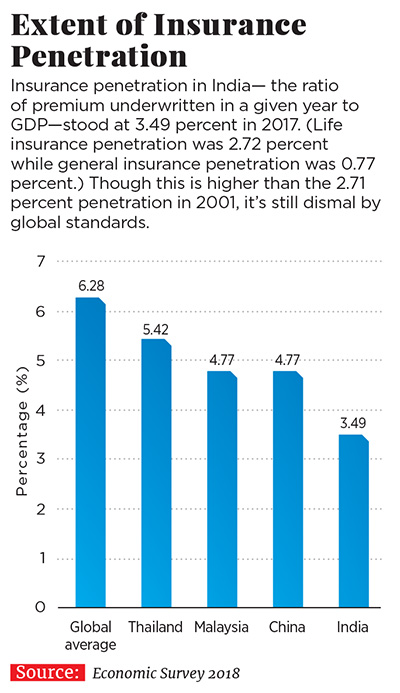 1. Insurance
Insurance is a highly underpenetrated sector. Higher economic growth, and consequently higher disposable incomes, will ensure the turnaround of this sector. There has been a 24 percent growth in insurance premiums collected in the last two years, says HDFC securities’ Sharma. He also expects foreign institutional investors to “aggressively pursue” insurance companies that have recently listed on the bourses.

2. Outbound Travel
Higher GDP numbers move in step with disposable incomes, which, in turn, lead to higher spending on consumer discretionaries. One sector into which the extra money could flow is international travel. The UN World Tourism Organization predicts that India will account for 50 million outbound tourists by 2020, double the current figure. A decade ago, the number was 8 million.

3. Organised Retail
With higher GDP growth, sectors that are still largely informal will see formalisation, catalysed by the implementation of measures such as GST. India’s retail sector is largely unorganised and a shift to a formal economy will benefit players in the organised retail space. Knight Frank says it is already seeing a shift in the way shopping malls are structured, with more space being allotted to food & beverages, and entertainment. The move is designed to attract higher footfalls when disposable incomes rise in a buoyant economy. (Sectors like plywood, agri-commodities, and health care also stand to benefit).

4. Office Space and Warehousing
The shift to organised retail will provide fresh impetus to office real estate and warehousing sectors. A recent Knight Frank report shows the slide in office space development was arrested in 2017, with supply growing at 7 percent annually. Overall transactions continue to substantially exceed supply and vacancy levels are down to 11.6 percent from 13.5 percent a year ago, says the report. The growth of ecommerce firms will further add to the demand for warehousing space.

5. Housing and allied sectors
‘Housing for all by 2022’ is a stated objective of the central government. Under the Pradhan Mantri Awas Yojana, 50 million houses are targeted to be built by 2022, with budgetary support. A growth in GDP numbers will be accompanied by rapid urbanisation and an expansion in the housing sector, and affordable housing could witness the sharpest growth. A part of the growth will trickle into allied sectors such as housing finance, building materials etc.

6. Banking
Financial inclusion is a precursor to sustainable growth. A push towards Aadhaar-based payments and zero-balance accounts augurs well for banking and financial firms. “However, among financials, growth could be skewed in favour of the companies that are safe in terms of capital adequacy and asset quality,” says Raychaudhuri of BNP Paribas. 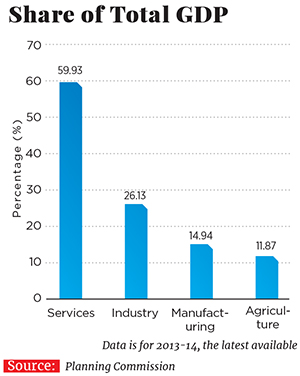 7. Fertilisers and agri-machineries
Sustainable 9 percent growth can only come through the contribution of the agrarian economy. Companies that are in the business of improving agricultural productivity—fertilisers, agri-machineries etc—are likely to benefit from higher growth rates.

8. Micro, Small and Medium Enterprises (MSMEs)
MSMEs are geographically located in rural or semi-urban areas and are a major source of employment. Higher GDP can only come with an expansion in manufacturing. The sector accounts for around 15 percent of India’s GDP, compared with around 60 percent for the services sector. The share of manufacturing in the economy is expected to grow to 25 percent by 2022, according to a recent report by research firm Dun & Bradstreet. This growth can come only by an expansion in the MSME sector.

9. Mutual Funds
Mutual funds in India added over ₹6 lakh crore to their assets under management in 2017, taking the base to around ₹23 lakh crore, according to the Association of Mutual Funds in India. The data also showed that the contribution of the country’s small towns to mutual funds’ asset base surged by 46 percent to ₹4.1 lakh crore by November 2017. Asset management companies, hence, are positioned to be major beneficiaries of inclusive growth.