A story that needs to be told better 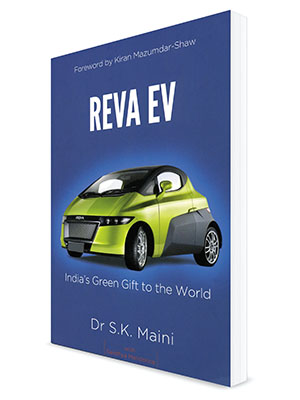 An electric vehicle (EV) is the Holy Grail of the automotive industry. For more than two decades now, car makers, with various degrees of seriousness, have been chasing the idea of building one with a simple motive: Let’s get off oil, and end vehicular pollution. Some have had a fair degree of success, like Tesla Motors and Nissan Motor Company. Others have fallen flat on their face—Think Global (Norway) and battery-charging service provider Better Place (Israel). And then there’s Mahindra Reva, India’s only EV manufacturer. But, except for the fact that it built an EV, there’s not much to talk about: Its cars don’t sell much, and the company isn’t profitable.

When I started reading Reva EV—India’s Green Gift to the World, I was expecting two things from its author Dr SK Maini, father of Chetan Maini, founder of Reva: One, a deep understanding of Chetan, the entrepreneur, whose life as an EV evangelist has been anything but easy; and two, a global perspective of action in the EV space, maybe even answers to why some business models have worked and others have not. The book disappoints on both counts.

In most parts, the book makes for a dry read. There is no detailing, emotion or attempt to tell the story of why Chetan wanted to build electric cars in India. It has been written in a matter of fact fashion: Chetan loved building things as a kid; he went to Stanford; he entered a competition where he built a solar car (it ranked third); to celebrate this, the Maini Group built an EV called Chets; Chetan worked with Amerigon in California to build EVs and then decided to move to India and make EVs here. I still don’t have answers to the following: Did Chetan ever have doubts? How easy was it to move to India? What did he do to build the team that made the first Reva? What did he go through when Reva failed to do well, and when Top Gear trashed it?

I also think the book has been written in a self-congratulatory tone. There is a lot of emphasis on how great the Maini Group is in manufacturing auto components; how, thanks to the Reva project, it picked up several new lines of business and has gone on to grow and do well; several paragraphs appreciate the efforts of partners, suppliers, policy-makers and Mahindra & Mahindra, which bought a majority stake in the company. Dr Maini often says he personally got involved in the process (wrote personal letters) to get various people on board. But I don’t see those discussions happening on the pages. What were their concerns? How did he allay their fears? Did they look at it as a successful partnership? How did the Mahindra deal come about?

There are, however, a few things that I got out of the book. One is that the Reva was named after Chetan’s mother. In Sanskrit, it means a new beginning and it is also another name for the river Narmada. Second, the whole Top Gear fiasco and how it seriously affected the company’s reputation. Third, I loved going through the pictures at the end of the book—the first Reva prototype, Chetan with his wife in a Reva convertible, and others. I think Chetan Maini and the Reva is a fascinating story. But it needs to be told better.