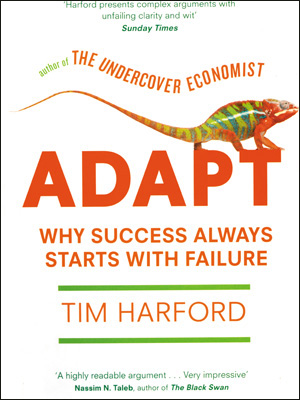 We don’t like failure. For a species that came about through a series of trial and error and therefore a series of failures, human beings are notoriously averse to it. This apathy is easy to understand. Failure makes us look inadequate. Sometimes it reveals a lack of effort. At other times it shows the gap between our ambition and ability. In a different context, in the matters of the heart for instance, it is seen as a rejection of the self.

In business, you will get to listen to statistics like seven or eight companies out of every 10 that are formed, fail. Almost 70 percent of all change initiatives that companies launch end in failure. In sports, if you are the British tennis player Andy Murray, failure is what you carry in your kit bag. If you are Roger Federer then failure is the tear in your eye at the 2009 Australian Open. Failure, no doubt, isn’t for the faint-hearted but like Dukkha it is the essential human condition.

Tim Harford says it is time we learn to give failure its due. We must always plan for it and work our way around it. Harford wrote the very popular and amusing The Undercover Economist. In his latest book Adapt, Harford says it is failure that determines success. Failure is what creates the variation in approach, basically new ideas. The process of failure determines what works and what doesn’t. It is also the way individuals and organisations learn.

Harford also shows how failure is embedded in the capitalist system and while capitalism may “lurch from crisis to crisis”, failure is the reason why  it still survives.

He talks about why the former USSR, with its rigid planning system, went belly up. Similarly, he shows how the Chilean economy, in the 1970s, imploded because of excessive planning that left no room for experimentation and failure.

One of the best examples of how failure leads to success is Harford’s explanation of how Billy Joel’s Broadway musical Movin’ Out went from being skewered by critics to being loved by them and the audience.

Harford’s arguments are astute for most part of the book. One is awed by the breadth of inquiry into various phenomena through which he explains how human progress came about because of a string of failures. His arguments are much weaker when he tries to push the case for doing away with planning altogether. Without targets, without deadlines, without plans, how would we even know whether we have failed? If anything, plans must be made with as much diligence. They should, of course, build a possibility for course correction, the Plan B as it were. And before experimenting on a large scale, you should try and fail at an acceptable level. You shouldn’t try and bet the house straightaway. A quote from Samuel Beckett, which opens Harford’s acknowledgements page, says it best: “Ever tried. Ever failed. Try again. Fail again.