Kerala - The Gateway of India 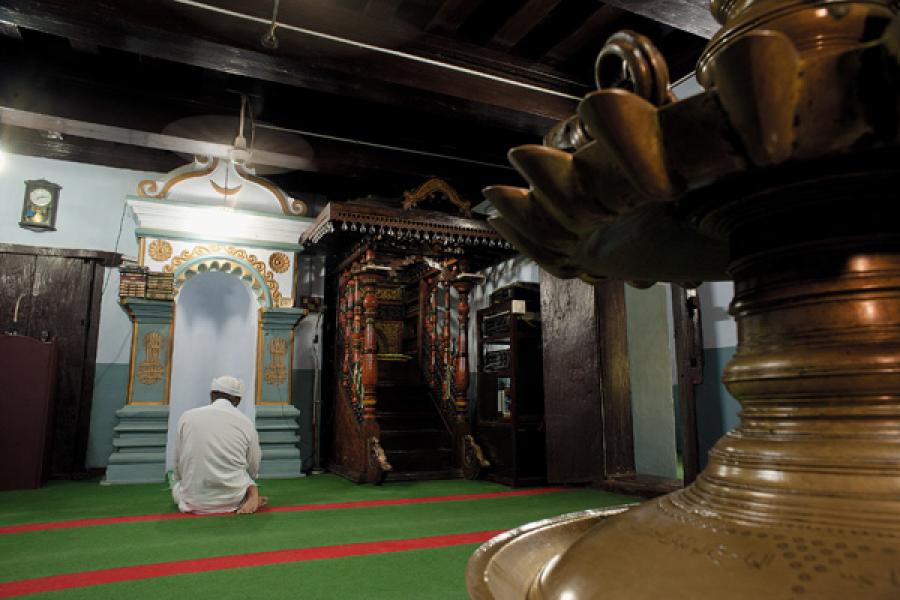 In the months of May, June and July more than six lakh foreign and domestic tourists land up on a sliver on the southern-most tip of the sub-continent to laze on houseboats lolling in its backwaters, get rejuvenating oil baths or simply gaze at the majesty of the monsoons. And this ­— the monsoon season — is the lean period for tourism in Kerala!

The state successfully marketed its serene backwaters, well-managed wild-life sanctuaries, ayurvedic treatments, temple festivals and boat races to attract the high-spending tourist. From a single-beach destination — Kovalam — in the early 1990s, Kerala transformed into a multi-experience tourism paradise that National Geographic Traveller magazine voted as one of the 50 must-see places in the world.

Revenue from tourism, which crossed Rs. 17,350 crore in 2010, accounts for nearly 9 percent of the state’s output.

The decidedly elitist tourism industry in Kerala has also remained unaffected by the state’s industry-unfriendly image — thanks to militant trade unions and often narrow-minded politics — and has, in fact, got unstinted government backing. In 2005, the state passed a legislation — the Kerala Tourism (Conservation and Preservation of Areas) Act — for the sustainable development of tourism destinations.

But now, Kerala, or rather Kerala Tourism, is looking beyond its backwaters and ayurveda and is preparing to entice tourists on an entire new platform: As a cultural hotspot. The idea is to offer the discerning traveller intellectual stimulation along with natural beauty.

“We’ve been there, done that. Kerala is already in the mindscape of travellers. The focus now is on style and being edgy,” says state tourism secretary Venu V., about the state’s marketing strategy. “Call it Kerala Tourism 2.0 if you will.”

Reviving an Ancient Port
Two millennia ago, the monsoon winds that brought rains to Kerala also filled the sails of ships with Greeks, Arabs, Jews, Romans and merchants and mariners from across the world. Somewhere along the coast was tucked a port called Muziris, where these vessels anchored and traded gold and silver for pepper, making the town an international exchange point for goods and ideas between 100 B.C. and 100 A.D.

Kerala is betting on the history of this ancient port to lure modern travelers, with the Muziris Heritage project as an ambitious attempt to merge history with culture and leisure.

It started with archaeological excavation in Pattanam, about 30 km north of Kochi, of what many believe to be the port city of Muziris. The exact location of the port has, however, remained a mystery. It was earlier believed to be situated at Kodungallur, a few kilometres north of Pattanam.

There are two kinds of literature that contain references to Muziris, says P.J. Cherian, director of the excavations at Pattanam and director of the Kerala Council for Historical Research. One set comprises texts in Latin and Greek, the languages of trade, written like handbooks or manuals based on facts and rationale. The second is a set of Tamil texts that are laced with fiction and legends, says Cherian.

Roman naturalist Pliny the Elder, who lived between 23 A.D. and 79 A.D., refers to Muziris in his encyclopaedic work Natural History as “primum emporium Indiae” or India’s first emporium.

He explained that travellers could reach the port quickly if they caught the wind called Hippalus from Ocelis on the Red Sea. Tamil Sangam poetry referred to it as the place where large Yavana ships arrived bearing gold and returned with pepper. 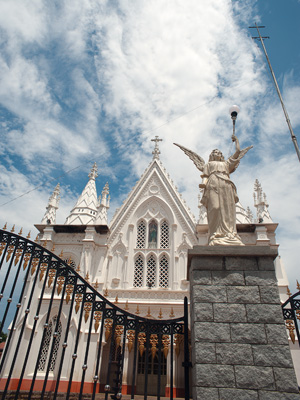 Image: Gireesh GV for Forbes India
MELTING POT St. Thomas Church in North Paravoor
No traces of the port were found until a team of archaeologists, including Cherian, stumbled upon pottery fragments that surfaced in Pattanam homesteads during the monsoons. These fragments pieced together the 2,000-year-old link.

Cherian, however, still shies from admitting that the site is indeed Muziris or Muchiripattanam: “Muziris could be one port or several. It could be the entire Kerala coast. It would require much deeper research and evidence to establish it.”

However, there is a heap of evidence that Pattanam was an Indian Ocean port city with multicultural and international links. “This society was well equipped to handle international trade and had a rather developed state and politics and organisational capabilities,” says Cherian, who is just back from Pattanam after the fifth season of excavation.

The dig has unearthed some fascinating stuff. It has thrown up the largest collection of high-quality stamped tableware, glass beads, semi-precious stones, amphora shreds, a canoe and what seems to be a pier. Roman gold and silver coins had earlier been found at Eyyal, in the neighbouring Thrissur district.

Monumental evidence in the area, known better within Kerala for an ancient Kali temple at Kodungallur, clearly suggests that it has been a cultural and religious melting pot. Kerala’s oldest church, synagogue and mosque are in the same region. Local legends date the Jewish link to the times of King Solomon who ruled between 971 B.C. and 931 B.C.

About 10 km north of Pattanam is the Cheraman Juma Masjid or mosque, believed to be from the time of Prophet Mohammad. It was built by Malik Ibn Deenar, an emissary of Cheraman Perumal, a local king who, according to legend, was India’s first convert to Islam. The Christians believe St. Thomas landed at nearby Azhikode in 52 A.D.  and established the first church on the coast. 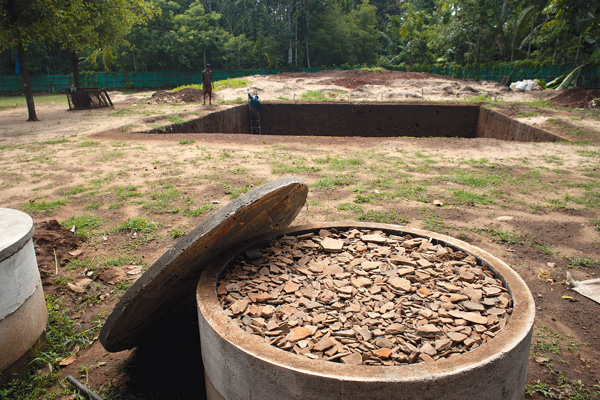 Image: Girish GV for Forbes India
Odds and Ends Fragments of terracotta pots and wares found during the excavations in Pattanam near North Paravoor, Kerala

Pattanam is almost at the mouth of the Periyar river and could have been at the centre of a trade route that stretched over land to the rest of the continent and by sea to the rest of the world. In 1341, a great flood in the Periyar destroyed the city, but also triggered off geographical changes that would create Kochi’s natural harbour and backwaters.

So far, it was natural beauty that brought tourists to Kerala. But now, history beckons. “You will be walking through history in the Muziris Heritage Tourism Circuit — through the layers of Dutch, Portuguese, Roman and Arabian histories,” said former finance minister of the state, Thomas Isaac, in January while announcing the project. The Muziris Heritage Project, for which the state has set aside Rs. 35 crore, is a network connecting about 100 museums, palaces, forts, temples, churches, synagogues and other historical monuments, along with traditional weekly fairs and the likes.

In March 2010, Isaac had said in his budget speech that the integrated circuit of monuments and events will largely be connected through water transport.

Muziris will be another unique feature, historical and cultural in nature, that the state is adding to its list of offerings, to ensure that each tourist can experience the state in multiple ways.

To burnish this image, the government is also promoting literary and art festivals. Kerala already has a popular film festival. In 2010, it hosted the prestigious Hay Festival, which brought together writers such as V.S. Naipaul, Vikram Seth, Gillian Clarke, William Dalrymple, historian Simon Schama and musicians such as Bob Geldof and Sting besides filmmakers and thinkers. This year, the government is expected to kick off an art biennale in partnership with a private foundation.

“It is perfect for the intellectual tourist,” says tourism secretary Venu. 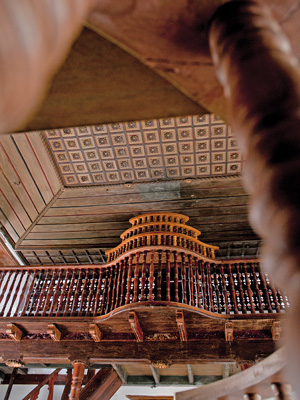 Image: Gireesh GV for Forbes India
Ancient Prayers The Jewish Synagogue in North Paravoor
Brand Kerala
Barely 600 km in length and just about 125 km in width at its broadest, Kerala was barely known even within the country until the mid-1990s. “Tourists came only for Kovalam,” says Amitabh Kant, Kerala’s tourism secretary between 1999 and 2001 and the man credited with radically changing the industry.

“We had charters full of garbage-collectors from Manchester and cobblers from London taking more from the destination than what they contributed to it (15 pounds a night). In short, high-volume, low-value tourism began to thrive,” says Kant. “We stopped that and focussed on high unit value realisation.”

Kant drew up a strategy to attract the high-spending, discerning tourist to the state. Celebrated filmmaker Santosh Sivan shot a promotional film that was shown at road shows across the world. The master-stroke, however, was inviting top magazine editors like Conde Nast Traveller and National Geographic to the state. It paid off when National Geographic Traveller listed Kerala as a ‘paradise found’ in its 1999 collector’s edition on 50 destinations of a lifetime.

What really rejuvenated the industry was the energy of private entrepreneurs. Kant picks a host of homebred entrepreneurs, such as the C.G.H. Earth group which runs the Coconut Lagoon at Kumarakam, tour operators such as E.M. Najeeb of Air Travel Enterprises, the Abad group, and Travancore Heritage in his book Branding India: An Incredible Story as those who saw the future and rose up to it.

In Tellicherry, C.P. Moosa turned his colonial mansion Ayesha Manzil, originally built by an East India Company trader in the 19th century, into a boutique hotel that serves local traditional food. Klaus Schleusner, a professor of German language at IIT Chennai, created the Surya Samudra Beach garden by dismantling and reassembling centuries-old traditional wooden houses to create a resort south of the capital Thiruvananthapuram, recounts Kant. Later, large hospitality groups from outside such as Indian Hotels, the Lalit, the Park and Zuri trooped in. 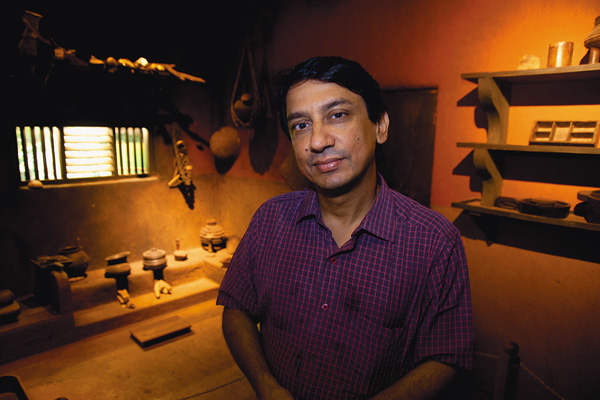 Image: Girish GV for Forbes India
Look Again V. Venu, Secretary, Kerala Tourism has a new dream
Kerala also had numerous large houses inhabited by a few people as the joint family system gave way to nuclear families. The government leveraged this by classifying services under the Homestay Classification Scheme and backing it up with marketing support. It tied up with Mahindra Homestays to bring together homestays scattered across the state and pushed the scheme at trade fairs and B2B roadshows.

The average spend per day by foreign tourists increased from about Rs. 2,600 in 2004 to Rs. 3,600 in 2010. The average stay per holiday is now about 14 days. But in spite of the aggressive marketing, Kerala ranks only 8th in India on foreign tourist arrivals and 14th on domestic visitors.

Tourism secretary Venu, however, says that foreign tourists in leading states travel largely on business, not leisure. “The data provided for domestic arrivals by most states are dubious, unlike Kerala, where data is collected from more than 5,000 hotels and lodges by a third party, the department of economics and statistics,” says Venu.