The book discusses the post-western world with a focus on China, India and japan 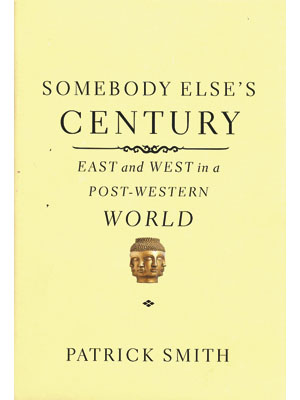 There have been, of late, many books that claim to explain “the Asian century”. Numbers are crunched and currencies are compared. Generalisations based on alleged Asian ways of thinking are stated by catchy — if inaccurate — metaphors.

Patrick Smith’s Somebody Else’s Century does none of these things. These three linked essays are inside-out rather than outside-in, discussing the “post-Western world” with a focus on China, India and Japan. It provides a deeper and more insightful exploration of the subject.

Smith’s credentials for the task are apt, having been a foreign correspondent in Asia for nearly 30 years. He writes: “These essays are about perspective — or its opposite, which is not blindness so much as a failure to overcome received assumptions.” He compares his method to that of Raghu Rai, aspiring for breadth of field. He tries to capture “Asia As It Is”, speaking to entrepreneurs, screenplay writers and village workers, from Somnath and Calicut to Kitakyushu and Quixia.

Each essay revolves around a pertinent question. What does it mean to be modern? What versions of history do we embrace and why? Can Asia understand itself without reference to the West? “After 150 years with the modern,” he says, “the modern has lost its strangeness for Asians. Neither is the modern understood any longer to be Western.”

He muses that now, more than ever, Japan will create an identity not based on an uneasy cohabitation of tradition and Westernisation but one that’s uniquely Asian — with lessons for other countries. In China, he discusses the many versions of the past, depending on which decade you were born in. And in India, he analyses the concept of heterogeneous time, and the tradition of the eccentric — touching upon the erosion of Hinduism’s syncretic tradition as well as the notion of jugaad, the country’s method of innovation.

It was Kipling who once wrote: “Asia is not going to be civilised after the methods of the West. There is too much Asia and she is too old”. Though slimmer than other works on the subject, Smith’s book goes further in unpacking this sentiment.

Tweets by @forbesindia
Is The Indian Economy Overheating?
Closing The Deal In Negotiations: Avoid Rushing In