Scott Patterson illuminates the secrets of the stock exchange 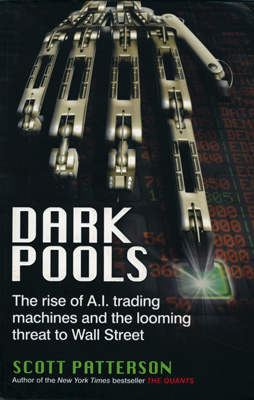 Over the last 20 years, technology has had a huge impact on financial markets. Machines, not humans, power transactions in the stock exchanges, and with such tremendous speed that it has become difficult for regulators to understand markets anymore. Transactions happen in milliseconds, and stock exchanges in Asia are investing in technology that will make even today’s pace seem turtle-slow.

In Dark Pools, Scott Patterson, a freelance writer and staff reporter for the Wall Street Journal, has created a lively journalistic account of the evolution of trading technology and the rise of machines. ‘Dark pools’ are private, lightly-regulated stock exchanges where artificially intelligent machines trade vast sums of money.

Patterson believes that much of the trading in the United States has become a huge dark pool because traders have used technology to create machines programmed to make money in a fraction of a second, sometimes using unethical trading practices like front-running and price manipulation, all while remaining very difficult to detect. These programmes are built to recognise patterns, and they learn from each other. Sometimes they imitate algorithms and cause market crashes, like the ‘Flash Crash’ of 6th May 2010 (where the DJIA fell by 9 percent and recovered in minutes), which Patterson thinks was the result of algorithms gone berserk.

The book has a nice cyberpunk feel to it, and the author concentrates on the stories of individuals who either wanted to make huge money or break the class hierarchy of Wall Street, people who understood programming to the extent that they could code a stock exchange from scratch and effortlessly take on the might of a Goldman Sachs or a Morgan Stanley.

Like Josh Levine, the teenage whiz kid with an extraordinary talent for understanding and programming stock exchange technology. Levine was hired by Datek’s former chief trader Sheldon Maschler and created the concept of the Monster Key, which became Datek traders’ ultimate weapon, monitoring and trading hundreds of stocks at one go. Levine later created Island, a computer system that bypasses the stock exchange and posed a real challenge to NASDAQ.

Then there is Haim Bodek, whose company, Trading Machines, used algorithms based on a branch of artificial intelligence called expert systems, glued to his machine 14 hours a day. When his trades stopped behaving the way they should, Bodek investigated and realised the entire pool was contaminated with hidden orders that manipulate the trading system.

Bodek is one of the books’ primary sources, and he is now talking to the authorities, explaining that the system is rigged.

Patterson takes a very pessimistic view of the future; he contends this system is unfair to the long-term retail investor who is investing his retirement money through pension funds.

He has a point, but the fact is that pension funds and other mutual funds are not upgrading themselves to meet market realities. Regulators, too, are behind the curve. The markets will always have crooks, with or without technology innovations. But technology has also made markets liquid, and trades have become faster, cheaper, even transparent. Regulators simply need to catch up with the rogues and the crooks.

This is exactly the kind of book that many Indian brokers are going to misinterpret, sparking appeals to regulators to either slow down algorithmic trading in the Indian markets or, if possible, even ban it. And that would be sad.

Dark Pools is a fascinating book that will bring home to the reader how close we are to the world of William Gibson’s Neuromancer.