As Delhiites flee the city, the farmhouse, a long-time status symbol, has evolved from a party haven to a family home 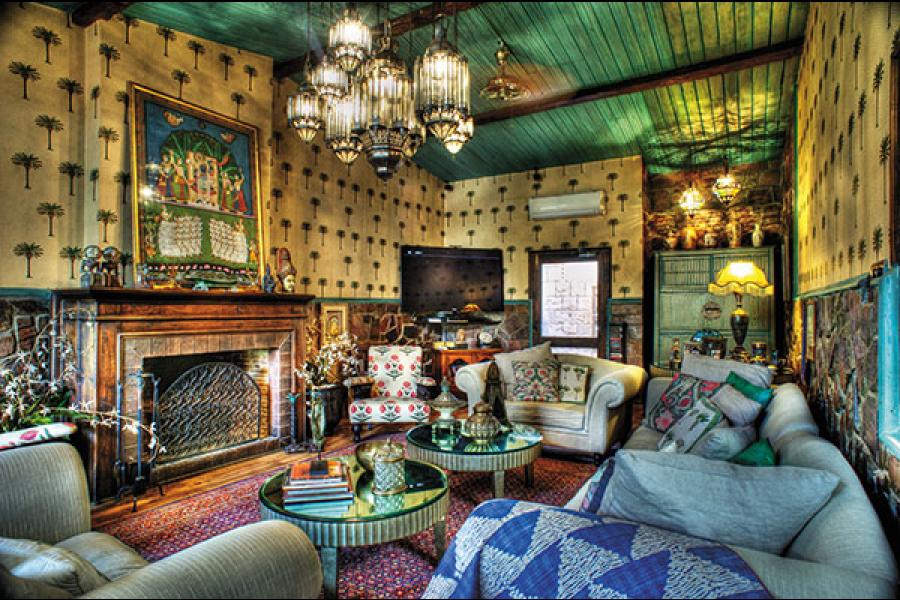 For Delhi’s swish set, the farmhouse is a necessary symbol of rustic luxury. These sprawling walled estates that abut the nation’s capital have witnessed some of the most lavish parties, and are havens where the rich retreat to briefly escape the city. The past few years, however, have seen some of the who’s who of the corporate world set up a permanent base in their farmhouses.

One such couple is Capt Shakti Lumba and his wife Ila, who moved into Laksh Farms four years ago. Nestled in the quiet stillness of the Aravalli Hills (a 30-minute drive from South Delhi), it is not a typical farmhouse. The Lumbas have built a ‘real’ farm, an eight-acre property on which they grow wheat, bajra, black-eyed beans, potatoes, okra, bananas and mangoes.

“It is not a farmhouse in the fashionable sense of the word,” says Capt Lumba, former head of operations at IndiGo and a well-known name in the aviation industry. “This is an agricultural farm with a house in it. We practise organic farming.”

There is no French chateau or a Swiss chalet-style mansion or even a swimming pool, though there is plenty of space for one. Instead, the Lumbas built a simple one-storey house with high ceilings and a cosy fireplace. “Almost all the architects we consulted came up with fancy designs. We wanted something simple and original,” says Ila.

They began buying parcels of land in installments 20 years ago with the idea of settling down in the area. At the time, the barren piece of land cost Rs 2-5 lakh an acre; today, it’s worth Rs 3-5 crore an acre. “Shakti was very clear that he didn’t want to live in Delhi after he retired,” recalls Ila. “It was his vision that brought us here.”

In Delhi, Laksh is an exception, not the norm. For the Lumbas, nothing can be more luxurious than breathing clean mountain air and eating organic food grown on their farm. And every year, between October and April, they share their sustainable way of living with others by renting out the seven bedrooms in their farmhouse. “We are almost always booked on weekends. Our guests tell us that Laksh is a slice of heaven,” says Capt Lumba, with quiet pride.

Open space, clean air and a better quality of life are some of the reasons why families are moving away from an increasingly congested Delhi. Three years ago, Sahil Malik, managing director and founder of Da Milano, a premium leather goods brand, moved into his four-acre spread, christened Amaanta Farm in Kapashera, Delhi.

He’s yet to complain about the quieter pace of life. “I live in a joint family, and we wanted a big house with a garden, which isn’t possible in the city,” says Malik. “This location is perfect for us. The Aerocity is nearby and we enjoy all the facilities of a city here.” His neighbours include Biki Oberoi, chairman of EIH Limited, the company that runs Oberoi Hotels, and Bhupendra Kumar Modi, global chairman of Singapore-based conglomerate Spice Global.

Apart from his living quarters and offices, Malik has also built a stunning events venue, which he rents out for parties and weddings. It’s booked between October and February every year.

“This is the wedding season and farmhouses are increasingly becoming popular destinations for weddings because of the large space available,” says Malik. It’s become a popular venue for international performances too: In November last year, American electro house musician Steve Aoki performed to a full house at Amaanta.

Real estate analysts estimate that there are about 2,500 to 2,700 farmhouses in and around Delhi. This number will almost double because of a July 2013 government policy that reduces the minimum area required for a property to qualify for a farmhouse from 2.5 acres to one acre. 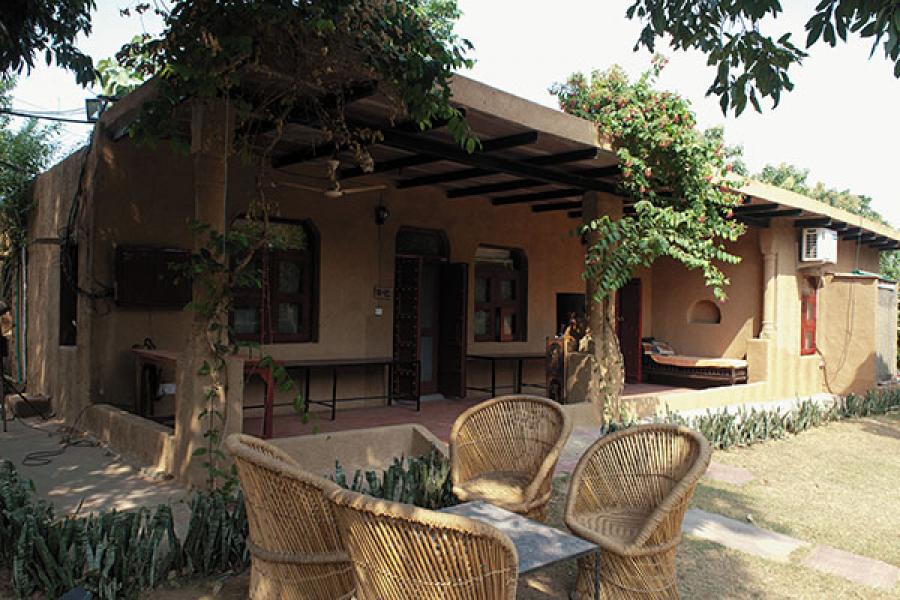 Image: Naresh Sharma
Farmhouses are havens where the rich retreat to briefly escape the city
Most of Delhi’s farmhouses can be found in the districts of Chhatarpur, Sultanpur, Bijwasan and Rajokri, but Kapashera—where Malik lives—is one of the newer addresses, says Rohan Sharma, associate director-research & real estate intelligence service, Jones Lang LaSalle (JLL) India. “Kapashera has become popular because land here is relatively cheap. Farmhouses can be bought at one-third the price of homes in other districts. An acre here costs Rs 8 crore compared to over Rs 20 crore in Chattarpur,” says Sharma.

That said, there’s no denying the lure of Chhatarpur, home to some of the oldest and most luxurious estates. It’s also a highly sought-after address. A farmhouse in this neighbourhood can cost anywhere between Rs 20 crore and Rs 60 crore. “You have the who’s who of Delhi’s elite living here, though honestly, I don’t know who my neighbours are. All I see are tall gates and walls,” says Samantha Kochhar, managing director of the Blossom Kochhar Group of Companies.

She currently resides in South Delhi, but plans to shift to her one-acre Chattarpur farmhouse by early next year. “The house was bought by my dad, who passed away three years ago, with the idea of spending weekends there,” says Kochhar, who is planning to make it a permanent family residence. “We are renovating the house now and hope to move into it by February next year.”

Her father had envisioned a Lutyens’ Delhi-styled bungalow, and Kochhar’s renovation plans have stayed true to the architecture. “It is like a rustic farmhouse with an old colonial charm to it. We’ve paid a lot of attention to large family spaces because I live in a joint family of 10 people and we need space for every member,” she says, adding that there is certainly a luxury aspect attached to owning a farmhouse. “We bought it 15 years ago. It is very difficult to buy this kind of property today.”

According to JLL’s Sharma, the farmhouse as a getaway is an old tradition, one that dates back 30 to 40 years. “It became trendy to own a farmhouse after the [ninth] Asian Games which were held in Delhi in 1982. South Delhi grew during this period. There was land consolidation in Gurgaon, and real estate companies such as DLF and Unitech made farmhouses and sold it to people.” By the 1990s, farmhouses became a status symbol. “Today it is a destination address,” says Sharma.

Fashion designer Urvashi Kaur also agrees that a farmhouse is a privilege that only a few have the luxury of enjoying. Kaur and her husband Gagan Duggal, managing director of Matrix Cellular, own three farmhouses in Sultanpur district. “We live in a one-acre farmhouse, and we have two more nearby, which are used to host large parties or serve as my husband’s workspace,” says Kaur, who moved to the farmhouse with her family nearly 13 years ago. “Many people would buy farmhouses mainly to host parties, but increasingly, they have started living there,” she says.

What’s unique about Kaur’s house is the absence of grilles and locks. “We have sliding doors and ceiling-to-floor glass windows. I can afford to have this because we have enough security here,” she says.

She sees farmhouses as an extension of Delhi’s bungalow culture. “We have never had high-rises in Delhi. A farmhouse is your own private and exclusive haven away from the madness of the city. I wake up to birds chirping,” she says.

Almost all these hideaways are a couple of hours drive from the capital city, and are a perfect union of convenience and serenity. “Our guests often tell us that Laksh is so near and yet so far. What they mean is that it’s so close to Delhi but still feels like an entirely different world,” says Capt Lumba.

And that defines luxury living for the city’s rich: The allure lies not in a sky-high penthouse, but in a not-so-simple farmhouse.

Tweets by @forbesindia
Bizjets are great acquisitions, but operating them is a daunting task
How a Triad scripted the turnaround for DSP BlackRock