Son Of The Soil

Mehmood Khan, Unilever’s global innovation head, goes back to his native village with a plan to turn it around

Nai Nangla in Haryana’s Mewat district could be just another Indian village, ridden with the usual problems of a people trapped in poverty: Lack of healthcare and clean water, low productivity, high unemployment and illiteracy. But Haji Siddiq Ahmed, a local farmer in his late 60s, sees a different vision. “I want this village to be an adarsh (model) village. Others should look up to this village — that this is what an ideal village should be like,” he says.
The image Ahmed sees is actually taking shape in this quiet village with a majority Muslim population. What’s more surprising is the way the change is taking hold. It may be difficult to imagine the humble folk of Nai Nangla as business executives, but the cool concepts reviving the economy of the village are no less professional.

Take dairy farming, which engages nearly 80 percent of the villagers. Earlier, all they could get was Rs. 12 for a litre of milk; today they can get as much as Rs. 25. Three years ago, female literacy was at 2 percent; today, almost 85 percent of the female population can sign their names and 86 percent of the children in the district are enrolled in schools. Some women are also learning to sew and are setting up their own tailoring units. Companies like insurance provider Aviva, ICICI Bank and Larsen & Toubro are beginning to look at Mewat both as a market and as a field for recruitment. They have hired locals, offering dramatically higher incomes. 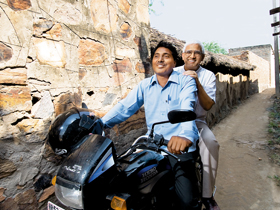 Image: Amit Verma
CHARGING UP: Memhood Khan's plans changed Ramzaan's life for the better. The young man treats Khan to a ride on his new motorcycle
The man behind these changes is a Nai Nangla native, someone who left the village nearly 40 years ago in search of an education and a career. His name is Mehmood Khan. Now 54, he is Unilever’s innovation head.
Now, thanks to him an experiment in introducing market economy is taking shape at Nai Nangla and the district of Mewat. An impossible feat for an outsider, but something the people of Nai Nangla have welcomed from one of their own. “Focus on education and use enterprise to bring change by leveraging resources in villages,” he says.
Khan has worked and lived in many countries over the years, making London his home for the last nine. But his link to his roots always remained alive; he would visit his village two or three times a year. He still remembers trudging a couple of kilometres to school everyday and taking cattle out to graze.
“I somehow landed a seat in university and then got into IIM-Ahmedabad. I was ejected by the system,” he says.
For the last five years, Khan has been hard at work to change “the system”.
He is converting a local resource, livestock, into a productive enterprise. He roped in the National Dairy Development Board’s Mother Dairy to spur Nai Nangla’s milk output and break the stranglehold that milk vendors had on local dairy farmers. At one time, these vendors — middlemen really — would lend money to farmers to buy milch animals.
In return, they would demand milk supply at low fixed prices until the loans were repaid. For most farmers, their income was too low to enable them to repay the debt. The result: They remained trapped in debt.
Khan was troubled by this age-old exploitation. He spoke to Mother Dairy and ushered in a new system to break this debt trap. Debt-laden farmers were given loans from institutions so they could repay the vendor and start selling direct to Mother Dairy. “Almost 25 people got loans to buy cattle, without having to pay any bribes,” says Ahmed.
Others who could repay on their own, did so and started selling to Mother Dairy for a better price. This competition forced the milk vendors to match market prices. Overall, incomes improved.
In July 2008, Mother Dairy set up milk collection centres in Nai Nangla and six other villages. In the first week, it got 70 litres of milk. Today, Nai Nangla alone gets 250 litres a day. “Gross income from agriculture has gone up from Rs. 80 lakh to Rs. 1.2 crore,” says Khan. “Milk (has become) a constant income source in a village which has seasonal income due to Kharif and Rabi crops.”


“Credit is not such a big constraint now. There are people now who are looking for business,” says Khan.

Khan woke up to the need for change in his village when the voluntary organisation Pratham, which educates the urban poor, launched its services in the UK in December 2003. “In 35 days they can teach a person to read and write, and take interest in it,” he says. He asked Pratham to test the abilities of children in Nai Nangla. The results shocked him.

Pratham found that students as high as fourth and fifth grades couldn’t even perform basic tasks like multiply or read a complete paragraph. Khan realised the enormity of ignorance in his native village. “That hit me hard. You can’t unlock the potential of rural India with this kind of education.”

The low level of literacy among women gave him sleepless nights. “Women are change agents,” he asserts. “If a community has to progress, one must empower women and education is the first step.” So education for women is one of the priorities for the trust he has formed in the name of his parents — the Rasooli Kanwar Khan Trust (RKKT). 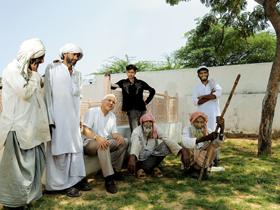 Image: Amit Verma
ME,MY PEOPLE: Khan's extended family has backed him in the change initiative
And there was another problem. “Mewat is a male-chauvinist area,” says Khan. Parents strongly resisted sending their daughters to school. Khan decided it was time for a “stakeholder meeting,” not unlike a meeting he would hold to build consensus on a contentious issue in the corporate world.
He received a good response. Around 200 people from 20 villages across Mewat turned up for the meeting. “An outsider’s prescriptions will not work,” says Khan.
While the villagers agreed that educating their girls was important, they had reservations. They didn’t want them to go outside the village, study with boys or be taught by male teachers.
So the group decided that they would be taught by female teachers from their own village. Says 15-year-old Naseema Bano, a regular at such classes, “People who have seen us have also started sending their daughters to school.”
In July 2008, the girls suggested that they could learn to sew and be self-employed. Khan installed 30 sewing machines in nine villages. Some of the women are turning a profit. Naseema Bano, for instance, makes a neat Rs. 2,000 - Rs. 2,500 a month.
Khan is leveraging his business network to bring employment to Mewat. A year ago, Aviva General Insurance was looking at a rural play. RKKT connected it with 60 local youth. Aviva selected 12. “It’s a cycle that generates money into the system. Aviva hired some people whose income went up. They can now buy Unilever products, for instance... This creates a market economy,” says Khan.
Khan has bigger plans. He is working with Deloitte to set up a water company in Mewat. “We’ll make 100,000 families of Mewat as shareholders. We’ll involve the community to green the Aravallis, replenish the lake here and then harness water and distribute it,” says Khan. He will need help from outside. He is looking to the World Bank for financing. It is expected to cost Rs. 1,000-crore, of which Rs. 900 crore will come from a funding agency and Rs. 100 crore from the people of Mewat, who will then become promoters in this company

Network Power
Mehmood Khan has been with Unilever since 1982, launching Unilever’s brands in Vietnam, Cambodia and Mongolia, before becoming the company’s global innovation head. His strategy for Mewat draws on business lessons learned along the way and leverages his network. Says Khan, “My strength is community mobilisation and local resources. For the rest, I look up to other people.”

Expanding Business
Nai Nangla will buy nine low-cost sanitary napkin machines from Coimbatore-based Jayaashree Industries, run by the machine’s inventor, A. Murugananthan. A company called Crafts of India, funded by the Future Group, will help design and package the napkins, to be sold in Big Bazaar outlets. This will employ 100 women.
Employment Quotient
Together with Genpact’s executive VP, N.V. Tyagarajan, Khan set up a computer centre in Nai Nangla. The lab has 11 computers, some supplied by Genpact. Sixteen of the 30 men trained in the first batch have been hired by ICICI Bank. These previously unemployed men now earn Rs. 7,000 to Rs. 16,000 a month. For English training, Khan has roped in
Kusuma Trust, a Gibraltar-based charity and ReadingWise, a company that works with NGOs to administer literacy programmes.
Click here to watch the video story

(This story appears in the 19 June, 2009 issue of Forbes India. You can buy our tablet version from Magzter.com. To visit our Archives, click here.)