By delivering improved eyesight at your doorstep, Lenskart.com's Peyush Bansal believes he is well-placed to capitalise on the growing eyewear industry in India 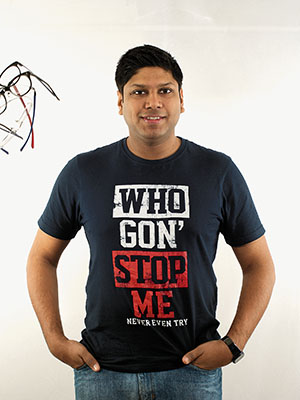 To test his latest offering Peyush Bansal likes to accompany his sales team on house calls. It was a Sunday house call in the western suburbs of Mumbai. They had gone to conduct an eye test and, hopefully, convince a middle-aged woman to buy a chic pair of glasses. Once successful, they asked her 20-something daughter if she’d like a free eye test; it turned out that the daughter, who had been riveted to a TV serial, had a power of -5, but didn’t have corrective lenses. Bansal persuaded her to buy spectacles too. “Maybe now she’ll know what her favourite actress actually looks like!” he says.

But the point he wants to make is about Lenskart.com’s USP: The offer of a prescription, and a pair of glasses, in the comfort of your living room.

Lenskart’s research shows that over a third of Indians need corrective eyewear, and only a quarter of them have access to it. That’s the problem Bansal (29) is seeking to solve.

With an eye on this potentially $10 billion market (it stands at $2 billion and is growing at 35 percent), Bansal has attracted media mogul-turned-investor Ronnie Screwvala to Lenskart. “With eyewear in India being such an unorganised, ‘mom and pop shop’ space, here’s an entire sector that needs to be created,” says Screwvala. Unilazer Ventures, led by Screwvala, invested $10 million in this Delhi-based company in February 2013; IDG Ventures had invested $4 million in 2011.

Founded in 2010, Lenskart makes, prescribes, delivers and services eyewear to about 1,000 customers a day—over half of whom live in Tier 3 and 4 towns, such as Coimbatore, Puri, Mangalore and Agartala. Though Lenskart sells high-end products like Ray-Ban, 90 percent of its revenues come from mass-focused in-house brands Vincent Chase and John Jacobs.

An average ticket size of Rs 1,300 puts revenues at almost Rs 50 crore a year. Although they aren’t profitable yet, Screwvala says they are 80 percent of the online eyewear market, and are growing at over 10 percent month-on-month. Lenskart’s online rivals are Jabong.com and Myntra.com for sunglasses, and GKBOptical.com for prescription glasses.

Bansal was an engineer with Microsoft in Seattle before moving back to India to start a slew of e-commerce sites such as Bagskart, Jewelkart, Watchkart and Lenskart under his parent company Valyoo Technologies. While in the US, he had started Flyrr.com (it sold eyewear to retailers). Being part of the $16 billion US market inspired him to start something in India. Bansal’s investors convinced him to drop his other ventures and focus on Lenskart.

While other e-commerce websites looked to be low-margin marketplaces, Lenskart wanted to own every part of the value chain to benefit from economies of scale. TC Meenakshisundaram, founder and managing director of IDG Ventures, says the deeper you go into the supply chain, the higher the level of aggregation and better the cost structures. “Instead of going to the distributor you go to the brand owner, and instead of the brand owner you go to the sourcer,” he says. Lack of scale is why Lenskart’s brick-and-mortar competition—city or neighbourhood-wide outlets—haven’t been able to expand. Meenakshisundaram says Lenskart’s revenues will grow 3 to 5 times in the next 12 to 18 months.

Bansal also uses technology to boost online sales. After he got customers to buy a pair of glasses—he  uses tools that, for instance, maps frames onto photographs of prospective buyers—he uses analytics to sell them a second pair. A 3D facial visualiser is now being developed. “Offline retailers don’t know who walks in through their door, or their preferences, and they don’t have the ability to store these choices,” says Meenakshisundaram. “Lenskart knows what customers like, how often they buy. We can use data to even drive design.”

Data analytics has helped Lenskart stock frames that are more in demand at their Okhla, New Delhi, warehouse and reduce delivery times. “For Delhi, we’ve sometimes been able to deliver in a day,” says Bansal.

Co-founder and industry veteran Sumeet Kapahi (49) has helped him build the back-end. Lenskart sources materials from China, cuts lenses at their Okhla centre, and dispatches them through courier services.

They are now testing their latest offering: Doorstep eye tests and sales in Delhi and Mumbai. This service, which needs ophthalmologists to visit customers at home, is a tough model to crack. Lenskart outsources this operation, but Bansal wants to have his own teams eventually.

On the whole, Bansal and Lenskart are just scratching the surface of the sector. With stylish glasses that start at Rs 500, their eyewear is accessible to India’s new middle class. “If you work on a computer all day, there’s a 70 percent chance you’ll need corrective eyewear,” he says. Given the number of people hooked to screens, business should be good.