Even as technology giants like Apple and Samsung encroach its market, India's largest watchmaker Titan Company is looking to stay relevant by adopting the best of both the mechanical and digital worlds 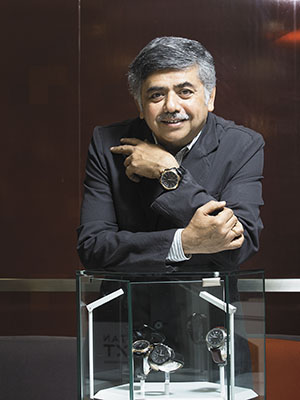 In the 2015 movie Spectre, Q—who heads the British Secret Service’s research division—hands James Bond a watch during his usual gadget rundown. On asking what it can do, 007 is told: “It tells the time.” By the end of the movie, the watch proves itself as more than a timepiece, with literally explosive capabilities.

Now, James Bond’s watches have always been more than time-keeping devices. And today, it is no different for the common man. A fashion accessory, a piece of jewellery or a collectible—a watch means different things to different people.

“A watch is no longer a time-keeping instrument since everybody has a phone,” says Yashovardhan Saboo, CEO of KDDL Ltd (formerly Kamla Dials & Devices Limited), a leading supplier of components to watch brands based in Switzerland. “So, the principal function [of a watch] is something else,” adds Saboo, whose company also operates the luxury watch boutique chain Ethos Watches in India.

Over the decades, the watch has evolved as a lifestyle accessory. Today, it has once again become a wearable with smart devices like the Apple Watch and the Samsung Gear range of smartwatches bringing modern communication, internet and mobile technology to the wrist.

It’s against this backdrop that India’s largest watchmaker Titan Company Ltd, which began operations over three decades ago as Titan Watches, launched the JUXT range of smartwatches in January this year. “The advent of technology and its miniaturisation is what triggered the move [to enter the smartwatch category],” Bhaskar Bhat, managing director, Titan Company Limited, tells Forbes India.

Titan rolled out the JUXT in record speed, in collaboration with American technology company HP. Conceptualisation, research and development and releasing the product in the market was completed in 12 months. Bhat, who has been at the helm of Titan since April 2002, says that for the company’s two other big bang in-house watch innovations—Edge (the slim 3.5 mm watch series) and HTSE (the self-energising, light-powered series of watches)—it was an over-four-year journey from conceptualisation to the market.

Titan’s smartwatches can be paired with Android-based smartphones and Apple’s iPhones for calendar alerts, messages, call notifications and social media updates. They also have a health app, which allows the user to track the number of steps taken in a day. Powered by an Epson processor (the electronics part), its 50 MAh rechargeable lithium-ion battery lasts for five days on full charge.

The JUXT smartwatch is currently available in three variants priced in the range of Rs 15,995-19,995. In comparison, Samsung’s smartwatches cost above Rs 22,900, while Apple Watches retail north of Rs 29,000 on online marketplaces like Amazon.in.

Titan’s decision to source engineering technology from a third party (HP) is also a first in its watchmaking history. The decision to partner “was mutual”, says Bhat. While HP was looking to popularise its smartwatch technology, Titan was scouring the market for the same. In return for its technology, HP collects a fee from Titan and also has the distribution rights of Titan JUXT in the US, the UK and Canada.

Titan’s foray into the smartwatch category is a bid to stay relevant and maintain its 30 percent share of the domestic organised watch market. The Tata Group company’s leadership in the Indian market began in the ’90s when it outpaced its (then) biggest competitor HMT. The meteoric rise of brand Titan impacted the fortunes of HMT’s watch division, which is now being shut down in a phased manner.

Even as it ventures into the silicon world, Titan has opted to preserve its DNA as a watchmaker. “There are new ways of thinking today: Hire the guys and create a new division [technology]. But that is not our DNA, which is watchmaking and design. I believe that big profits come when a company masters certain competencies,” explains Bhat. He adds that the company had even “evaluated” the prospects of making a mobile phone. “We are watchmakers. If we stray into the technology space… as a technology player, we will fail badly.”

Hence, the Titan JUXT marries the analog module of a traditional watch with modern electronics. The company views it as a juxtaposition of high fashion with technology—a key differentiator from its competitors.

Titan is not the only traditional watch manufacturer to venture into the ‘smart’ segment. TAG Heuer SA, the US-based Fossil Group and a few others have already launched smartwatches. In India, though, Titan is the first traditional watchmaker to roll out smartwatches, even before its global competitors.

“Given that the whole world is moving towards smartwatches, Titan has made the right move,” says Raghu B Viswanath, chairman and chief vision holder of Vertebrand, a brand value advisory and marketing consultancy company. However, he has a word of caution. “When they [Titan] launched, they were a very aspirational brand. Over time, two things have happened: International premium and luxury brands have come to India and you have an entire generation that’s grown up on Apple and Samsung devices. Titan has been caught in between,” he says.

But are the likes of Apple and Samsung with their range of smartwatches a threat to the watch industry? “They [smartwatches] aren’t going to replace traditional watches for the next five to 10 years. A lot will also depend on what the smartwatches do,” says KDDL’s Saboo. The ground reality, though, is compelling.

A report in observer.com on February 22 throws light on the changes happening in the watch market. As per the report, which quoted data from Strategy Analytics, in the December quarter of 2015, worldwide smartwatch shipments (8.1 million units) outpaced Swiss watch shipments (7.9 million units) for the first time. Apple is said to have garnered a 63 percent share of the smartwatch market and Samsung a 16 percent share.

Analysts are busy drawing a parallel between the smartphone explosion and what is happening in the smartwatch category. “Smartphones were first conceived for the affluent, then they penetrated among the more tech-savvy audience and then on to the masses. Smartwatches will also move in that direction,” predicts PN Sudarshan, senior director, Deloitte. He adds: “Today, there is a lot of white space in the sector, which will be filled by the traditional technology players, mass players or someone like Titan.”

Ravi Kant, CEO of the watch and accessories division, joined Titan Company 28 years ago as the head of direct marketing. Having seen Titan emerge as India’s largest watchmaker, Kant’s fears are not about how technology companies are redefining the watch market. They are more to do with how the watch category has lost a significant share of the consumer’s wallet.

“Earlier, about 50-55 percent of sales at our stores came from gifting. That has now fallen to 37 percent. Today, when I have to gift someone something, I have many options. There was a time when newly-weds would receive about 18 to 20 Titan watches as gifts. Today, it is table wear and appliances,” explains Kant.

He points out that the price of a smartphone is at times cheaper than a watch. “Earlier, people used to buy a second or even a third watch. Now that isn’t happening as people want to save money and upgrade their phone every year,” he says. And this trend is most visible among the youth. “Eight to nine years ago, [Titan’s youth brand] Fastrack grew at an annual rate of 30 percent. Now, it has slowed to single digits,” adds Kant.

Despite these changes, Titan’s watch business has seen a linear growth to Rs 1,921.04 crore in fiscal 2015 from Rs 1,675.87 crore in fiscal 2013. The company’s exports, too, registered a year-on-year growth of 12 percent to Rs 137.76 crore in FY15. By the end of this decade, it expects the business to clock revenues of Rs 5,000 crore. One driver of growth would be Titan’s push in marrying smart technology with traditional watchmaking.

“Over a period of time, you will see technology coming into our other brands [of watches] at varying levels and not necessarily all of them will be smart to the fullest extent possible,” admits Kant.

Forty years ago, when quartz watches entered the market everybody thought mechanical watches would die. But that didn’t happen. Now, can smartwatches replace traditional ones? They don’t have to, when watchmakers like Titan are marrying the old with the new.

Tweets by @forbes_india
When Sachin Tendulkar means business
Why dilute equity, when you can have venture debt?