Metro rails can be a solution in the top 20 cities, but not beyond, says Vinayak Chatterjee 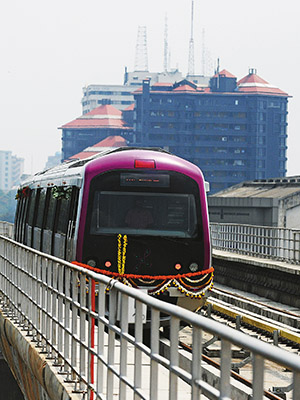 Image: Getty Images
Bangalore is the most recent city to get a metro rail. It is not viable, or required, for all cities to have a similar service

Somewhere the equation is wrong because the moment we start talking about urban transportation, the conversation veers towards metros.

A metro is just one solution that is related to the size of the city’s population. There is a popular perception that towns with less than a five lakh population don’t merit a metro. Then there are other factors, such as population density, the ability to pay, and finally the intensity of commuter traffic. All these have to be taken into account for a metro rail to be viable in a city.

Of India’s 5,400 towns and cities, about 100 require a 21st century urban transportation system. To my mind, a city like Chandigarh is ideal for, more than a BRTS, an electric trolley bus. And then, of course, a big city requires an RRTS because the pattern is linked to the model of urbanisation.

There are three patterns of urbanisation. First is a corridor along which a city expands; for instance from Delhi to Manesar to Bawal. These are not even cities but one cluster after the other. Second, you have satellite cities. The third is a pattern of suburbanisation, where a city is concentrated and the circle is expanding. Gurgaon would have been called an instance of suburbanisation but now it is integrated.

All these patterns of urbanisation require interventions. For a concentric pattern, you require a metro. For satellite and sleeper towns, you require RRTS. And for corridor development, you probably require something of a metro or an equivalent that is split into corridors. I think this is the future of India.

If you consider 100 cities, you have to make choices. And the choices are also dependent on the availability of a carriage base. Trying to squeeze a BRTS ends in disaster. If we had a BRTS at Shantipath in Delhi or along the Ahmedabad-Gandhinagar stretch, where there is a wide carriage base, it would have been an automatic success.

The Kolkata Metro did not create the kind of upswing (like the one created by the Delhi Metro) even though it is close to 30 years old. It is unfortunate that it has spawned a thought process in the public’s mind that they too need a metro.

A metro is an extremely capital-intensive project and has to meet all four parameters mentioned above. Many of our cities don’t.

The lesson for the future is: Don’t plan urban transport systems that don’t feed into each other. Today urban transport and city planning are seen as distinct divisions. They will have to merge.

Another aspect is financing. There is a big debate over whether metros should only be built by public enterprise. I think wherever a public-private-partnership (PPP) model is possible, it saves government expenditure. With revenues from ticket sales and real estate in and around stations, this can be made viable. Each case has to be examined individually. For instance, in an urban sprawl like Delhi, Mumbai or Bangalore, you don’t have a choice but to go for a metro. That’s because you have private vehicles congesting roads.

The question is how to finance it? If you choose a PPP model, you need to have incentives to make it viable.

What are the other models? One is where the government funds 100 percent of it. The Kolkata Metro was an output of Indian Railways. The second model is the Delhi Metro, where there was a 50:50 cost split between the state and Central governments, topped with debt amortisation over a long period. The third model is that of the Hyderabad Metro, carried out through PPP.

You must also remember that all elevated structures are not metros. There are many lighter options. Monorail is one. They are good short distance connectors with lighter traffic handling and lower capital expenditure. They could be the main mode of transport for cities like Dehradun, Chandigarh and Bhopal. Ranchi or Raipur needs a light electric trolley bus system. There needs to be awareness about alternatives. If your city doesn’t support the capital expenditure involved in a metro then you should not consider it. The suburban model, the corridor model and the sleeper model need different types of urban transport solutions.

Today there is no construct; urban transport means a metro, which is not correct. For the top 20 cities, a metro is certainly a solution, but not beyond that.


(As told to Ashish K Mishra) 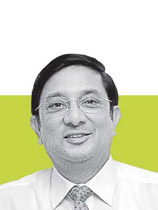 Vinayak Chatterjee, 53, is chairman and managing director of Feedback Infra, an infrastructure consulting firm based in New Delhi. He is also chairman of the Confederation of Indian Industry’s National Task Force on Regulatory Framework in Infrastructure.