Vishal Bali and Ferzaan Engineer are investing money, technology and personnel in their home health care provider Medwell Ventures, targeting a million customers and a footprint across 15 Indian cities in 3-5 years 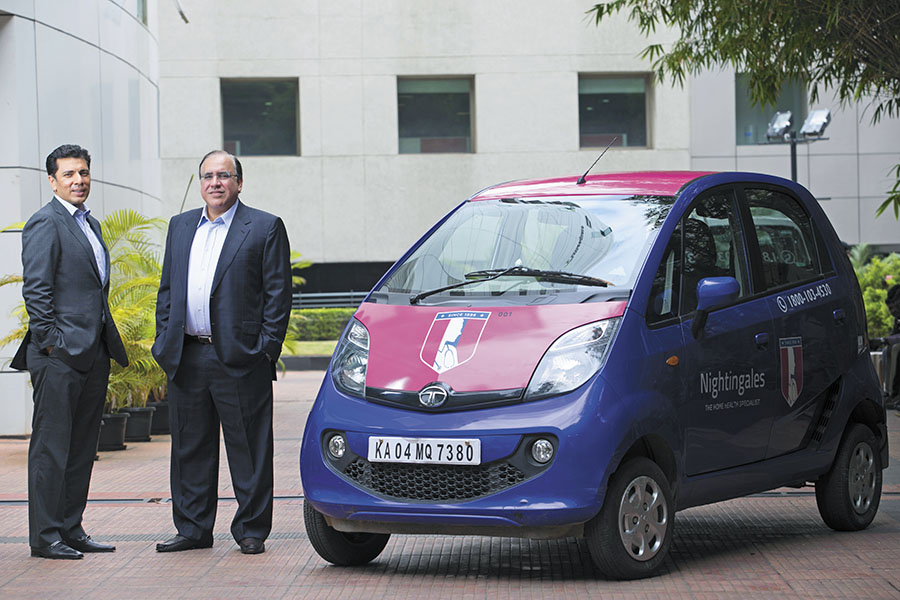 Bhuvana Maheshwari is a retired English professor in Bengaluru. At 55, she has fulfilled her parenting responsibilities and her four children are busy building their own futures. However, despite having her family around, dealing with the physical challenges of ageing is a lonely battle for Maheshwari. She needs regular physiotherapy sessions for the pain in her knees, a problem exacerbated by the fact that she is overweight.

For people like Maheshwari, who can’t handle a hospital visit, conventional health care services mean little. That’s where Medwell Ventures comes in. The Bengaluru-based startup provides home health care services to customers like Maheshwari. House calls by a Medwell physiotherapist are making a difference, she says. “I feel the need for someone to help me with my exercises, and it’s not possible to do these things [without assistance],” she says.

Maheshwari is blunt about the hard realities of urban life: “Caring [for a patient] is important. You need emotional support to recover faster. Physically, we may be able to manage with a bit of medication, but today there is what you might call an ‘emotional drought’. In that context, Nightingales is a reassuring organisation,” she says, referring to Nightingales Home Health Services, a pioneer in home health care that Medwell purchased in April 2014, for an undisclosed amount, to foray into the sector. Started in Bengaluru by Radha S Murthy, a medical practitioner, and Premkumar Raja, a social entrepreneur, Nightingales was then part of the Nightingales Medical Trust, providing doorstep medical services since 1996. The company is now a unit of Medwell but the brand name Nightingales has been retained.

“Home health care is both a simple and powerful idea, which is what attracted us to it in the first place. It has both a latent and a societal need,” says Ferzaan Engineer, 54, Medwell’s co-founder and co-chairman.

“With rapid urbanisation, children are living separately from their parents in different cities and countries, which brings its own set of challenges.” He adds: “Every family has had some or the other need for these [home health care] services. For example, an elder in my family has been able to delay the need for a joint replacement surgery with physiotherapy sessions at home.”

While physiotherapy is very amenable to the home health care model, Medwell’s founders have a more holistic and ambitious vision: “Our model of home health care has always been around the continuum of care,” Vishal Bali, 49, co-founder and co-chairman of Medwell tells Forbes India. “It’s not about sending a nurse, a doctor or a physiotherapist to your house. The real value of home health care is to provide levels of care which is speciality oriented.”

Medwell isn’t the largest player in home health care services—Portea Medical has those bragging rights. But it is among those that has attracted, and retained, investor attention.

Bali, former CEO of Fortis Healthcare, and Engineer, previously the CEO of the Indian unit of US-based clinical research provider Quintiles IMS Holdings, started Medwell in 2014 with about $3 million in seed funding, largely from their own savings. The next year, they managed to raise $10 million from Eight Roads, the venture funding arm of investment management firm Fidelity International Limited. 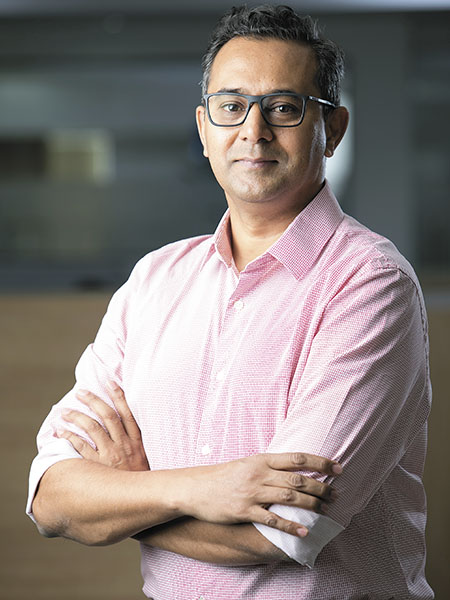 Since then, Medwell has expanded from Bengaluru to Hyderabad and Mumbai, and expects to cover 15 cities and touch about a million homes in three to five years. It is also in talks to raise another $15 million from various funds, Engineer says.

“Medwell represents a segment that hasn’t yet evolved, but where we have had an opportunity to make an early investment and build a leader in the country,” Prem Pavoor, a partner at Eight Roads, tells Forbes India. Starting in 2008, Pavoor spent four years evaluating the entire health care landscape in the country, before committing to backing ventures. Today, multiple factors are coming together to make the segment ripe for change, Pavoor reckons.

First, over the last two years, we’ve seen a growing trend of professionals turning entrepreneurs, he says. That has infused a much-needed fresh set of entrepreneurial talent into the sector.

Second, money is more easily available by way of venture capital funding across various stages of businesses, and third, is the rise of the smartphone as a platform to kill the “information asymmetry” in health care.

What Medwell has done in the last two years is to demonstrate that it can use its funding money efficiently. “Unit economics is beginning to kick in and is working for us,” says Bali. In other words, Medwell’s business model, boiled down to the level of just one individual customer, shows promise.

The company charges an annual subscription fee from its customers. The price varies depending on specialty, type of service, number of house visits needed and so on. For instance, a stroke rehabilitation treatment plan can cost between Rs 14,000 and Rs 45,000. Pain management costs Rs 6,000-Rs 9,000.

“We also have a year-long health engagement plan called ‘Care 365’ which starts at Rs 10,000,” a company spokesman said. And the number of people buying these packages is rising: House visits rose to an annualised run-rate of 125,000 in October from 25,000 in June.

With these revenues, some of Medwell’s branches, which serve as logistical hubs for doctors and other medical staff, are not far from breaking even. “This is not just an investment business but also a profitable one,” Bali says. “We have our playbook now,” Engineer says, and it is one that ticks all the boxes, Bali adds, on growth, returns and value. “That’s what gives us the confidence that we have created a new network and an ecosystem that will thrive in times to come,” says Bali.

Underpinning this playbook is the combination of a strong IT backend and a customer-facing smartphone app. The company has relied on software applications developed in-house, largely using open source software (applications whose source code can be modified), and deployed on the cloud.

Medwell’s smartphone app is available on both Android and iOS platforms, says Gowtham Jayaram, chief technology officer at the company. “We’re a paperless organisation… our idea is open source, AWS [or Amazon Web Services, the unit of ecommerce giant Amazon that offers a suite of cloud-computing services] and apps.” Much of Medwell’s IT systems run on AWS’s “elastic cloud” (a term used to denote cloud-based systems that adapt to workload changes). Built in-house, the applications deliver a real-time view into what’s happening at various points of the operations to the right people at the right time—such as a branch manager or a “physio-lead”.

Customers can book services while individual branches can showcase their speciality on the app. There are both SMS and in-app notifications, and “an Uber-like feedback system” helps Medwell track the performance of its staff. A rating of three, out of a maximum five, or lower, will trigger a process of improving the performance of the concerned staff, explains Jayaram.

Finding, hiring and retaining good talent remains the biggest challenge in this sector, Bali says. The number of employable people in the health care sector is much lower than what is required for a population as big as India’s, he says. Therefore, Medwell is putting together its own training academy in Mumbai. It already trains its own staff in Bengaluru.

Today, there is much more awareness among the practitioners about the home health care business, says Sunny Kichloo, manager-rehabilitation, at Medwell. Kichloo has been with Medwell since its inception and says the home health care sector in general and Medwell, specifically, offers great opportunities. “Traditionally, one had to start out as an intern at a hospital and work one’s way up. The physiotherapist’s role would often be that of ensuring that a doctor’s recommendations are followed. Here, you get the opportunity to see different cases and take the lead in formulating an innovative care plan and seeing it through,” he says.

As Medwell expands, it expects to have training facilities in every city or major hub that it operates in. Over the last two years, Medwell has increased the 15-strong full-time staff strength at Nightingales Home Health Services to about 1,000 staff currently deployed across Bengaluru, Hyderabad and Mumbai. Medwell has five branches in Bengaluru, four in Hyderabad and two in Mumbai.

The investments could be worth it as the overall home health care opportunity in India could double from an estimated $5-$7 billion currently to $10-$15 billion over the next two or three years, Bali says.

But for Medwell, there is competition from startups like Portea and home health care services marketplace Pianta, which was recently acquired by Indonesia’s Go-JEK. Currently Portea is perched on top with the widest footprint. However, given the size of India’s population and the untapped market, there is enough room for more than one player. “Even a 5-6 percent market share would deliver substantial returns,” Bali says.