Conscious capitalism, CSR, sustainability and beyond

Is conscious capitalism an oxymoron? Can businesses focus on achieving financial goals while also making sure they drive positive change? The Forbes India Impact Series, presented by Goodera, kicked off in Mumbai with an exclusive CEO roundtable to evaluate some of these sustainability ideals. 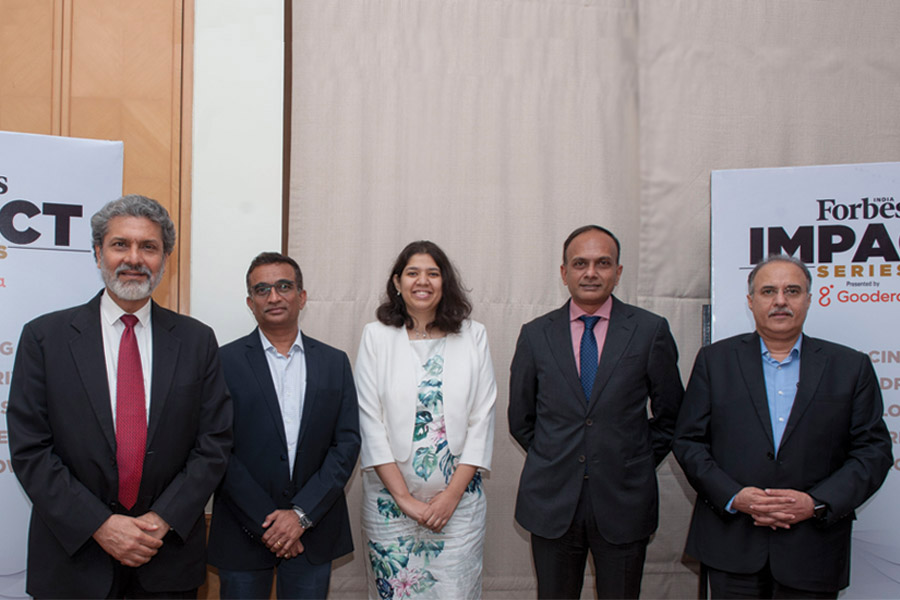 Playing devil’s advocate, Neeraj Gangal, opened the conversation by querying the participants about their views on the thought-provoking statement, ‘Conscious Capitalism is a self-contradictory statement’. Deepak Iyer observed, “In my personal opinion, as well as the opinion of my company, there are a lot of symbiotic relationships that can be fostered in businesses, if one is conscious. Further, while profits are an integral part of a business, merely focusing on profits will not lead to sustainability.”

He explained with a real-life example of the journey of Mondelez India. Being an equatorial crop, cocoa is not native to India. Yet 51 years ago, the company brought the crop to India, then working with universities in Kerala it began cultivation. Today, its cocoa yield is 3X the global average and the company produces 50% more cocoa than it requires, enabling it to sell the excess in the market. Looking back, bringing cocoa cultivation to India has certainly benefited the business by localising supply but it has also given back to communities, comprising around 100,000 farmers, by giving them and their families a stable livelihood. “It’s a great example of why there need not be a contradiction between business progress and consciousness; of course every business has to find its own way to bring in such sustainability,” he concluded.

Anil Sardana endorsed the view with his premise that while a business exists and grows, it cannot do so without simultaneously meeting social objectives, like creation of employment. So rather than a contradiction between capitalism and being conscious entities, there is actually a natural connect between being successful in business and meeting social objectives. “Businesses have to be absolutely in consonance with the inclusive growth story. They have to be in consonance with the very purpose for which they exist in society,” he said.

Coming from the technology sector, Rajen Vagadia offered a different perspective to the ability of businesses to contribute to the greater good. He explained, “In the last two years, rural Indians have gained increasing access to 4G and we feel proud that we have played a role in this. Making handsets or the technology that empowers the poorest of the poor is the truest form of returns that a company can get. While it generates monetary returns, it also delivers social returns in terms of uplifting consumers in various ways.”

Rajeev Dubey offered a multi-dimensional view on the relationship between corporates and their social connect. On a more economic front, he believed that an organisation could not be competitive on a sustained basis, no matter what strategy, structure, processes and metric it followed, unless it also showed extreme care for its stakeholders and nurtured and nourished its core values. At another level, he and his company believed that fundamentally, all business decisions are philosophical in nature.

Offering an illustration, he said, “At Mahindra, our core purpose is to drive positive change in the lives of our stakeholders and communities to enable them to rise; we seek to do that through outperforming businesses. And this cannot be sustained, unless we are fair, inclusive and caring.” Coming back to the theme of conscious capitalism, he continued, “Either way we come to the conclusion that you cannot be competitive unless you’re conscious and capitalism needs conscious competitiveness that is fair.”

Explaining the genesis and philosophy of her company, Richa Bajpai said, “Our mission as a company is to actually power this entire world with good. When we’re competing with the likes of Amazon and Flipkart with regards to talent, we say that this is a company where you can do good and at the same time, do good business. So our heart and the mind is the right place and we’ve been lucky enough to get investors who want to back something like this.” She added, “People are now ready to see technology as something which can benefit this whole ecosystem. So, if it doesn’t go out to the masses, and if it doesn’t solve problems, or lead to transparency or better accountability, then the technology is not doing its work.”

Responding to her perspective, Rajeev Dubey opined, “CSR addresses the unmet needs of underserved customers and under-penetrated markets. That is where real business opportunity lies. Like our group chairman says, the day we cannot distinguish between CSR and business is the day Mahindra would have arrived.”

Clarifying his stance, Rajen Vagadia said, “CSR are those activities we undertake as social work and everything else is conscious capitalism for us. Everything we do probably impacts society. It benefits us as well as everybody else involved.”

Anil Sardana also believed that using muscle money to achieve business objectives, at the cost of disturbing the social fabric, does not deliver sustainability for a corporate. On the flipside, being conscious of the larger social fabric earns a corporate the right of existence and a purpose for growth due to the alignment of its purpose with the greater good of society. “CSR is just jargon created to nudge and directed corporates to align their purposes with social causes. Large corporates, large brands, large businesses always existed with the clarity that they should work with society.”

Deepak Iyer agreed, sharing that his corporate philosophy has always been to strive to give more to communities and the planet than they take.
On the issue of whether forcing companies to undertake CSR is purposeful, both Deepak Iyer and Rajen Vagadia averred that companies who always believed in the philosophy of giving back are spending more than 2%, while Rajeev Dubey stated that even in a recession, conscious capitalism, in the sense of serving underserved customers and underpenetrated markets, would still be possible because as agreed earlier, consciousness and capitalism are not in conflict in any way.

There were also many ideas shared on the subject of consumer empowerment. While for a communications company transparency is empowerment, in the case of a chocolate company, it is innovation, while for Mahindra and Mahindra it is complaint redressal, dissemination of information and creation of fair markets. Richa Bajpai observed how technology was empowering corporates and NGO customers by making them more efficient and also bridging the trust deficit.

The role of employees as differentiators and the competitive advantage of a business was next on the anvil. The panel was in consensus on the importance of employee empowerment, nurturing their aspirations and the need for creating a conducive work culture and environment to drive business sustainability. They shared their views on values of trust, unleashing the potential of people by creating passion for their work and other aspects of running a good business. These, and other pertinent issues which play a role in driving conscious capitalism, were fleshed out at the engaging round table meet.

Tweets by @forbesindia
Do performance incentives make us greedy?
The price of the (really) good life