Crypto and Blockchain as a catalyst for change by Sumit Gupta Co-Chair BACC, CEO and Co-Founder, Coindcx

Cryptosphere's applications, built on the blockchain technology, will provide a springboard for the next wave of growth 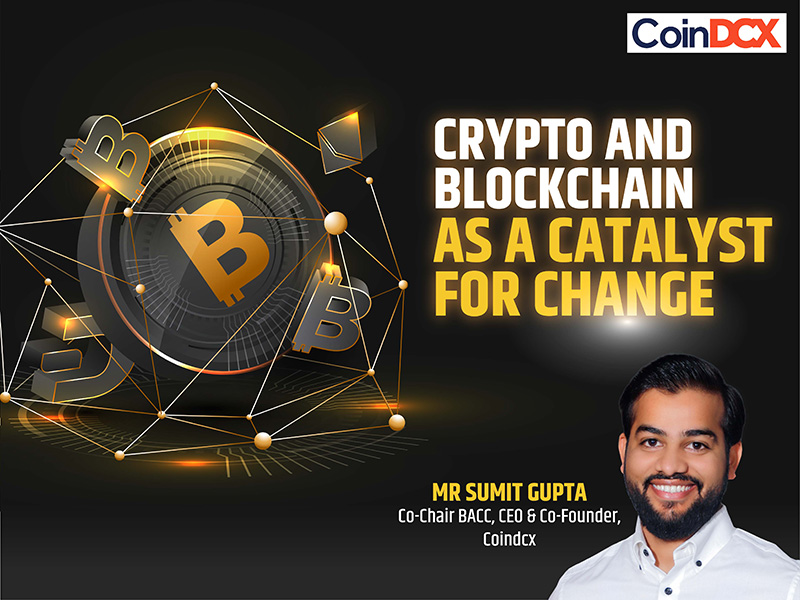 When you try searching for the term “Metaverse” on Google, over 670m results show up. The word was coined by Neal Stephenson, an American science-fiction writer back in 1992 in his book, “Snow Crash”. Today, all these years later, it has gained popularity and momentum. Facebook plans to hire some 10,000 people in the European Union in the next few years to build a Metaverse. Last month JP Morgan, America’s biggest bank opened its first virtual branch on the Metaverse. Some say that it will disrupt industries with potential annual revenue of at least $2tn.
These staggering numbers represent a bigger cultural shift in many countries, including India. Last week it was reported that Tech Mahindra, an IT services giant launched TechMVerse to offer “an immersive experience to its customers”. Such innovations are a byproduct of blockchain, the underlying technology that does a lot more than just keep track of cryptocurrency transactions. It has practical applications that are causing the lines between legacy businesses and new-age technologies to blur.
Crypto-sphere’s popularity is not limited to just startups and traditional outfits. Governments around the world are also counting upon the technology’s potential. For instance, despite America having different regulations in this industry on account of a dual legislative system, the country has largely been supportive of cryptocurrency.
The New York State Department of Financial Services launched BitLicense in 2016 as a licensing framework for cryptocurrency businesses. Similarly, Wyoming in 2019 passed several blockchain laws recognising crypto as digital assets. Many mayors in American cities have used crypto to raise money for their public projects. The EU has also recently considered setting up a consolidated framework for cryptocurrencies.
In this year’s Union Budget, India also made headways in recognising crypto’s prospects. The announcement that earnings from cryptocurrency will be taxed brings in much-needed clarity among retail investors who can now safely park some of their savings in this new asset class to diversify their investment portfolio. Now, with the right policies, the crypto industry of India can play a pivotal role in creating jobs, which in turn can accelerate the growth of the economy.
India also plans to launch its own Central Bank Digital Currency (CBDC), a digital version of cash in the near future. It will draw upon various regulations and the legislative framework to shape this new industry.
What was once a preserve of just the techies is now being adopted in the mainstream by startups, companies, governments and even countries. Web3, considered as the third iteration of the Internet, built on the blockchain technology, is no longer just a buzzword. It’s real, present and scalable. It will only grow from here.
The pages slugged ‘Brand Connect’ are equivalent to advertisements and are not written and produced by Forbes India journalists.