India's unicorn boom: A fad or a sign of things to come?

India is raining unicorns. What's driving it and is this phenomenon here to stay? 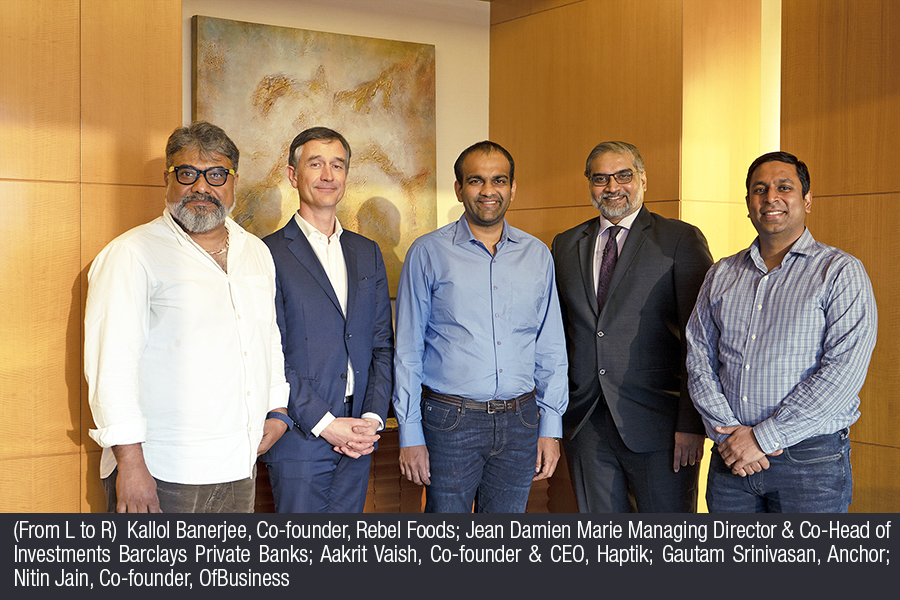 Few countries have belted out unicorns—companies valued at $1 billion or more and yet to be listed on the stock exchange—than India. Nearly 100 such startups, cumulatively valued at around $320 billion teem across the country offering products and services which cover a wide gamut of industries. According to CB Insights, a market intelligence platform, India will be home to 250 unicorns by 2025.
It begs the question just how did the country, which made its name as an IT services powerhouse, become home to enterprising outfits that go beyond just fulfilling outsourcing needs of global giants? More importantly, is this a passing fad or something that will endure for  years to come?
Forbes India gathered an eminent panel comprising of Jean Damien Marie, Managing Director & Co-Head of Investments Barclays Private Bank, Kallol Banerjee, Co-founder, Rebel Foods, Nitin Jain, Co-founder OfBuiness and Aakrit Vaish, Co-founder & CEO, Haptik, to discuss this subject in more detail. 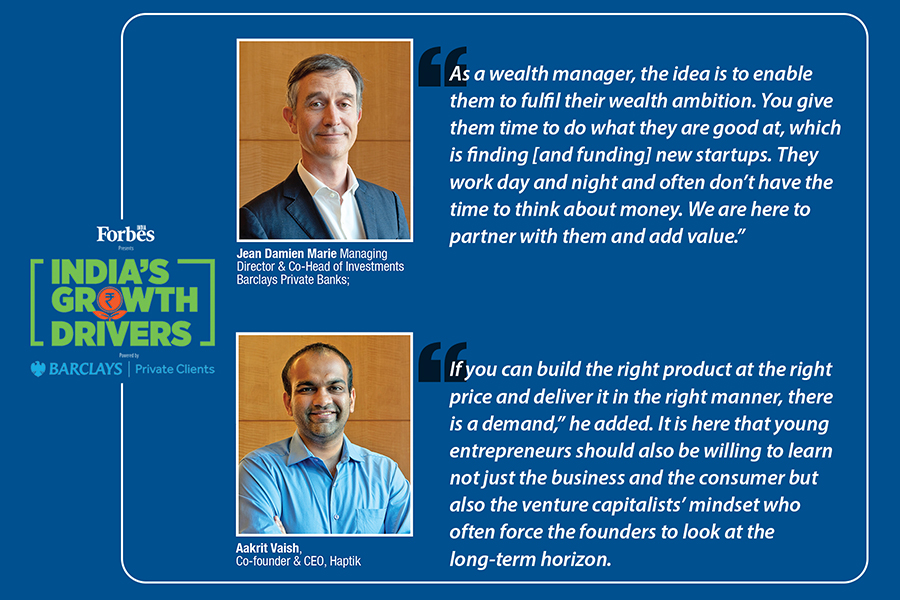 Mr Vaish credited the unicorn-fest to three big events. First, the launch of Jio, the broadband service that made internet affordable to the masses. Second, demonetisation in 2016 which spurred digital adoption. And lastly, the pandemic-propelled innovation which instantly moved more people online. He offered the opinion that during this time the “digital ecosystem accelerated by five or seven years, and that this decade is going to be absolutely phenomenal.”
Not only has the volume of startups skyrocketed, but so too have their valuations, with some recording astronomical figures. But will these unicorns be able to justify that in the long run? “The short answer is yes,” said Mr Marie. “India has a big market and growth dynamics backed by sound fundamentals,” he added. Often, this may not be evident immediately but the value creation is immense. The debate between making money and driving growth is a universal one and will continue in any country. However, for India, he urged everyone to look at the “addressable market” which is as huge as it is perennial.
Small wonder that unicorns continue to fuel great expectations. During such times, all panellists agreed that startups need to focus on their core strengths, and to avoid straying into territories that bring short-term rewards at the expense of more valuablrelong-term differentiation. 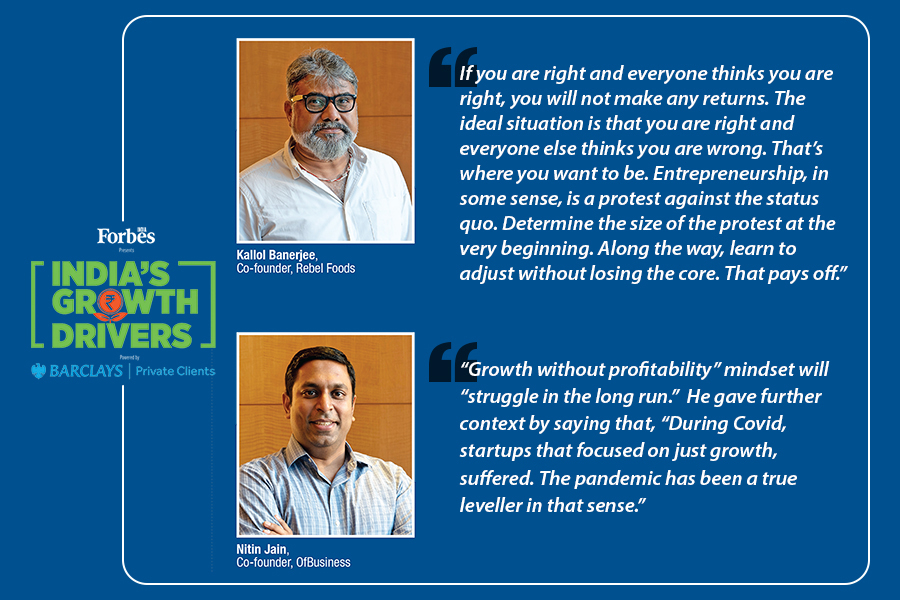 According to Mr Jain, those with a “growth without profitability” mindset will “struggle in the long run.”  He gave further context by saying that, “During Covid, startups that focused on just growth, suffered. The pandemic has been a true leveller in that sense.”
The focus, according to Mr Vaish, should be on aiming for a “profitable sale from day one.” He later added that the “best companies raise money not to finance the growth of the existing business, but (rather) to finance new products and new businesses in which they want to get into.”
There may yet be some players who could belie this mantra. But they are few and far between: unless the company introduces a product or a service that changes the industry itself, or becomes part of the daily routines of customers by altering their existing behaviours, all outfits need to think about being profitable from the outset.
This may be a tall ask but India’s market presents an opportunity like no other. “We leapfrog”, said Mr Banerjee from one era to another. Education, for instance, is a prime example. While there is a dearth of schools in the country, unfortunately the student-teacher ratio is far from ideal. It takes years to set up the physical infrastructure for building these institutions, but that hasn’t held India back. Interestingly, so-called ‘ed tech’ has filled the gap, much in the same way that fintech has compensated for a lack of bank branches, ultimately making banking more accessible to people across the country.
It is the talent pool that makes it all happen, according to Mr Marie. “There are 1.5 million engineering graduates in India compared to 300,000 in the US,” he said. From the consumer-standpoint, “India has twice the number of internet users compared to the US.” Also, the governmental support for this “leapfrogging exercise” acts as a catalyst for the large addressable market.
Indeed, this was not always the case. “Brain drain” was an often-used phrase in the 1990s, and continues to be used even today, albeit when prefixed by the word, “reverse”.  The founders on the panel illustrate this trend, with each chosing to come back from various stints in the West. Whereas the demands from venture capitalists and consumers will continue to grow, it should be looked at as an opportunity instead of a challenge, opined Mr Marie.
And the opportunity is not only huge but also distinct. “India is a supply constraint market” according to Mr Vaish. “If you can build the right product at the right price and deliver it in the right manner, there is a demand,” he added. It is here that young entrepreneurs should also be willing to learn not just the business and the consumer but also the venture capitalists’ mindset who often force the founders to look at the long-term horizon.
But how can one know for sure if the business they are in will make money? While there is no right answer or a guarantee of success, Mr Banerjee offered this perspective: “If you are right and everyone thinks you are right, you will not make any returns. The ideal situation is that you are right and everyone else thinks you are wrong. That’s where you want to be. Entrepreneurship, in some sense, is a protest against the status quo. Determine the size of the protest at the very beginning. Along the way, learn to adjust without losing the core. That pays off.”
Additionally, for long-term success, being transparent with employees is important to drive a cohesive work environment. “Transparency is a well-understood term but difficult to practice,” said Mr Vaish. One needs to carry people along and “make them part of the decision making,” agreed Mr Jain.
Ultimately, the change should be driven from the top. It’s the attitude and the itch to do something different that differentiates the more successful founders than others. Sometimes this can be triggered by challenging one’s own status quo. For instance, Mr Banerjee quotes his co-founder Jaydeep Barman, formerly at McKinsey: “I got tired of changing the world slide by slide”.
To the question of managing wealth, the panellists agreed that diversification is key. Mr Jain believed in investing at least a fourth of the earnings in startups that will create some sort of disruption. Instead of looking at real estate, say, it might be more fruitful to fund new startups.
Indeed, some of these will fail, added Mr Vaish. “But it’s amazing to learn from these experiences. For instance, had I not invested in crypto, I would have never known about it,” he said. He proposed that around 40-45% of wealth could be parked in traditional assets like mutual funds and debts, and the rest in direct equity and crypto. He was quick to add that it’s the work that takes precedence. You may, at most, take an extra vacation a year, but you continue to be in it for the thrill of creating value.
“Once an entrepreneur, always an entrepreneur,” declared Mr Marie. “As a wealth manager, the idea is to enable them to fulfil their wealth ambition. You give them time to do what they are good at, which is finding [and funding] new startups. They work day and night and often don’t have the time to think about money. We are here to partner with them and add value.”
The pages slugged ‘Brand Connect’ are equivalent to advertisements and are not written and produced by Forbes India journalists.