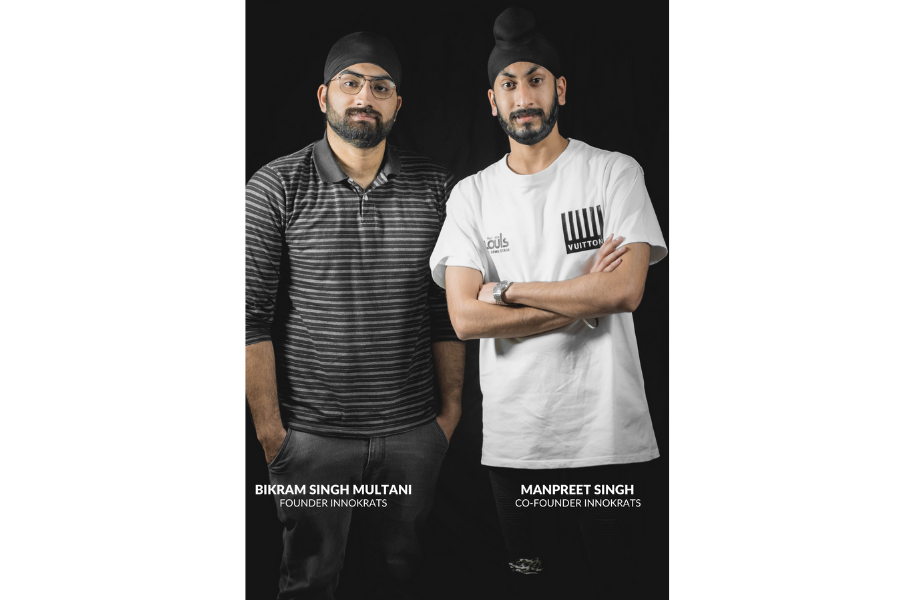 Jammu is famous for a lot of things, be it the valour of Dogras, the climate, its markets and the forts and palaces. Jammu and Kashmir which is also known as the crown of India have given us another entity to be very proud of. It is none other than the young entrepreneur Manpreet Singh, the Co-Founder of Innokrats. Born in the year 2000 in Jammu, Manpreet developed a strong affinity towards computers and gadgets at a very early age of 3. Driven by this passion and love for the machines, Manpreet always dreamt of doing something great and thinking something out of the box. When Manpreet was in his 3rd standard, he was intrigued by the fact that how some people perpetually take orders from their bosses and carry out their work to earn money, so at the tender age of 8, Manpreet decided to become his own boss but faced a problem in achieving primarily because of his age. Being from a non-business family, Manpreet had no one to go to for seeking business advice and he started researching and reading about great business personalities like Bill Gates and other deriving lessons as well as motivation from their stories. Tragedy struck him when his father, Mr Suraj Singh, passed away from cancer when he was just 9, although he knew that his father was suffering and was prepared to let him go, life became a little difficult for him and his mom, Mrs Balbir Kaur. Passing away of his father meant that Manpreet would not have a normal childhood like any other child and seeing his mother work hard for bread and butter made Manpreet more strong both in will and character. Owing to the hardships he was made to face at a young age, Manpreet was made more determined to achieve his childhood goal of being his own boss. At the age of 12, Manpreet started developing his own websites which later took shape into a business idea and in no time, Manpreet was making websites for his clients and earning money. Having learnt a major part of website designing and building by Microsoft’s free online courses which he used to take in his free time, Manpreet was way ahead of his peers who usually spent their time playing video games. Manpreet’s hard work was already earning him money, but it also earned him recognition when he was officially recognised as a creator by Microsoft India and Microsoft UK. In the year 2017 alone, Manpreet attended 3 events organised by Microsoft and also stood out as the youngest participant in them, this enabled Manpreet to make contacts with Microsoft’s core team which later helped him achieve his goals and dreams. The year which changed Manpreet’s life forever was 2018 when he was introduced to Mr Bikram Singh Multani, having had the common aim of being their own boss, Bikram and Manpreet founded Innokrats at the age of 18. Innokrats is a tech company which focuses on Network Attached Storage Devices. In the year 2018, Manpreet made a major decision of relocating from India to the United Kingdom, for his own higher studies and in order to study the international markets so that he can expand globally. Young Manpreet Singh became a recognised name in the market and a lot of media companies. Currently, Manpreet works in the Tech Sector, real-estate sector, Food tech and sustainable fashion. Manpreet and Bikram have a few expansion plans for the year 2020 wherein they plan to launch his company in the United States of America. Talking a little more about their roles, Bikram primarily focuses on the development of the products and business structure while Manpreet’s main job is Public Relations, Branding and marketing. The name of the company to be launched in the United States is V-Carte and they are also planning to launch contactless business cards under this brand, this they say would reduce the wastage of paper to a large extent. The duo is also planning on launching a food tech company to be headquartered in London which will perhaps be launched after the Covid-19 pandemic situation is under control. The two also have a lot of plans in the pipeline which include working with celebrities and entrepreneurs and other projects some of which are in their R&D stage. Manpreet who is also aiming to support budding entrepreneurs in different aspects and industries, says that he is happy and positive about everything that he has achieved in this tender age of 20 and hopeful of many good things to come in the future. He advises the youth and the young entrepreneurs to never shy away and stop learning especially from their failures, he also says that instead of wasting time here and there, one should try to keep their mind open and learn from anything and everything around them. https://www.entrmanpreet.com/

Tweets by @forbesindia
Meet the fierce entrepreneur Astyle Alive (Alec Martin) making it in the Pandemic
CSR for Covid-19 is rising, but what about other causes?