Since its launch in December 2020, the 'Period of Pride Ek Swach Soch' the movement received immense support from key decision-makers and influencers 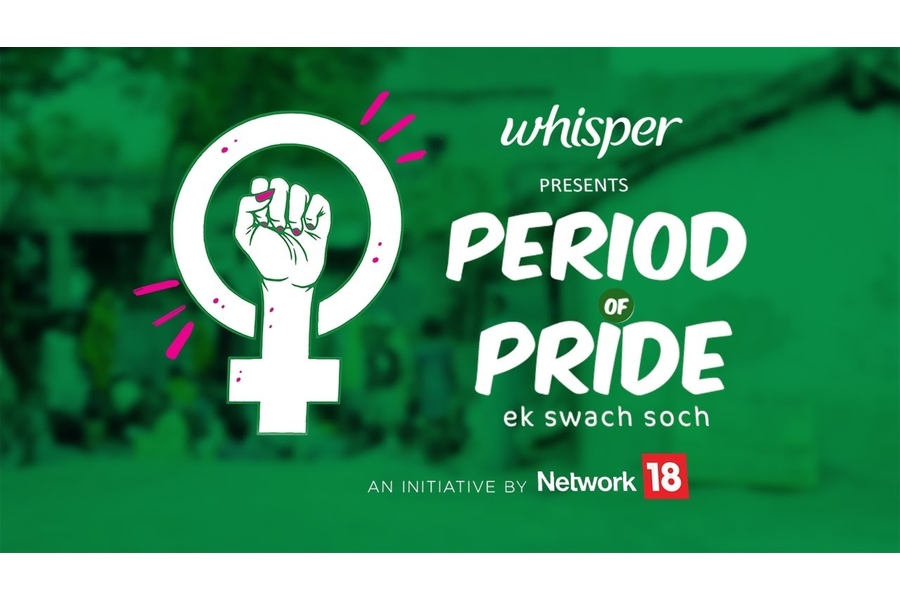 More than 2.3 crore adolescent girls in India drop out of school annually when they start menstruating. Due to the shame and stigma attached to periods, more than half of young Indian girls are completely unaware of what a period is, how to manage it hygienically and stay safe. But, creating period awareness through education became the key to keeping girls in school and building generations of young Indians who associate periods with strength rather than shame. Working to remove the stigma of periods, adding menstruation education to the school curriculum and driving the evolution of how we talk about this natural phenomenon, P&G Whisper, in collaboration with Network18, started a movement called "Period of Pride".

Since its launch in December 2020, the 'Period of Pride – Ek Swach Soch' campaign mandate saw adolescent school-going girls, teachers, women and mothers in rural and urban areas come together for a common cause. And they were not alone. The movement received immense support from key decision-makers and influencers in the government.

Voices in Support
The results were overwhelming. 10 lakh+ Indians signed the petition, and plenty more took notice and threw their support behind this worthy cause. As part of its year long 'Period of Pride - Ek Swach Soch' campaign, Network18 recently hosted a telethon to take stock of this campaign's progress and its ripple effect that millions will feel. The three-hour telethon, led by actor and campaign ambassador Bhumi Pednekar, brought together various stakeholders and policymakers to explore multiple facets of the movement for the first time.

In conversation with Network18 Managing Editor Bihar & Gujarat, Dr Brajesh Kumar Singh, Union Health Minister Mansukh Mandaviya said, "The reach of media extends well beyond the bounds of the cities. This makes disseminating such an important message a great responsibility that I'm glad to see you have embraced in its entirety. Mass awareness movements like "Period of Pride" are crucial to not only empowering women but also continuing to educate our society on matters of grave importance that can get swept aside otherwise."

Highlights of The Telethon
The stellar telethon line-up also included badminton champion Jwala Gutta, actor Neha Dhupia, singer Jonita Gandhi and India's youngest mayor Arya Rajendran to name a few.
Each of them applauded the efforts of the movement to take our country into a progressive future. Chattisgarh CM Bhupesh Baghel spoke about how important this movement is to dissipate the shame around periods, "We need to change the way we think so that our daughters and women can be supported and progress fearlessly."

The chief minister of Assam, Himanta Biswa Sarma, also added, "Assam is a state where we celebrate periods and girls attaining puberty. I'm happy to see the same ideals reflected in this progressive movement that will educate both genders." He also urged more people to come out in support of this ground-breaking movement by stating that, "It is a national issue, and a movement like this could save millions of Indian girls. It's time boys, and men learned as much about this as girls and women."

The Ripple Effect
Period of Pride has grown into a massive national movement for girl child education and empowerment. With more and more people over the 10 lakh mark signing up to support the petition for mandatory inclusion of period education in the school curriculum, the movement has far-reaching effects.

As a direct result, the Government of Jharkhand has committed to adding the Menstrual Health curriculum in their State education syllabus. Furthermore, the Union education ministry and the state government of Assam have also acknowledged and agreed to consider adopting the 'menstrual education curriculum' being developed by UNESCO.

The telethon also showcased smaller parts of the movement in places like Kakori. Whisper's on-ground movement mobilised support across touch-points and reached over four crore girls. The main focus of this part of the programme also includes spending time with mothers and addressing the critical knowledge gap in society.

Overall, as part of this campaign, Whisper has succeeded in educating over four crore girls on periods and their hygienic management and has pledged to inform an additional 2.5 crore girls in the next three years. 'Period of Pride – Ek Swach Soch' is one massive step towards achieving 100% menstrual hygiene adoption in India. To stay updated on this critical movement, head over to www.periodofpride.com
The pages slugged ‘Brand Connect’ are equivalent to advertisements and are not written and produced by Forbes India journalists.

Tweets by @forbes_india
Sparkles, lingerie, disco: Fashion gets back into party mode
Photo of the day: Smashing start