From waiting tables to catering fine cuisine at the most talked-about social events, this man's journey is one of unwavering self-belief and talent. Meet Sanjay Vazirani of Foodlink 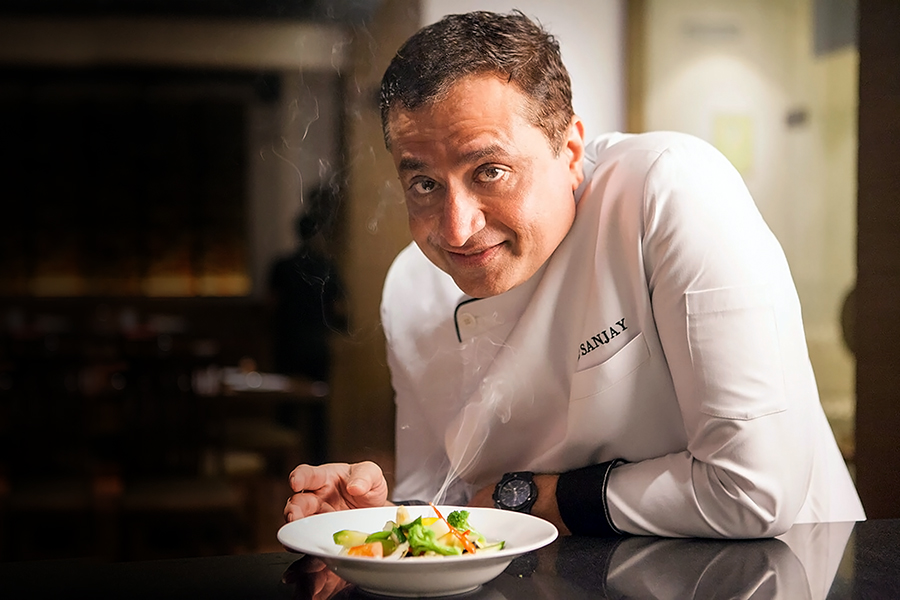 Sanjay Vazirani’s grit and determination is a story that changed the face of an industry. With his catering giant enterprise Foodlink, he has changed the Indian catering scene and redefined luxury dining in India and overseas. Today, the biggest celebrity weddings across the globe have experienced Sanjay’s stellar culinary offerings.
A square peg in a round hole
Sanjay’s life today is a far cry from his childhood. Born to a forest officer father who was transferred from one remote wooded location to another every two years, Sanjay’s first brush with the city happened when he came to Baroda (today Vadodara) after completing tenth grade. Working as a night receptionist in a small hotel ‘Kaviraj’, he not only made ends meet but also put himself through pre-university.
Soon after, he enrolled in the Institute of Hotel Management, Ahmedabad. Conversations with elite classmates from Delhi and Mumbai about the catering industry in those megacities and the standard of life made him restless; he was missing out. So, he put in for a transfer to Mumbai for his second year and won it on sheer merit. Mumbai, rightfully regarded as the ‘city of dreams’ gave Sanjay the pedestal to his dreams. With the steep rent for his room, 250 rupees being paid by his family, money was tight, and so he would wait tables at luxury hotels like the Oberoi that got him a free meal from the five-star instead of buying his own dinner.
After finishing his Diploma in Hotel Management & Catering Technology & Applied Nutrition, he received an offer from Oberoi Hotel to be their management trainee, a great opportunity to lap ahead. This was Sanjay’s first step towards charting his course in life, but he opted for the simpler Holiday Inn Hotel. Even at the time, he knew he would want to set off on his own eventually, so joined a place where there would be more to learn rather than be lost in the weeds in a large establishment. His performance in the management program raised him to the position of a maître d'hôtel easily enough - but the challenge was lost to him. 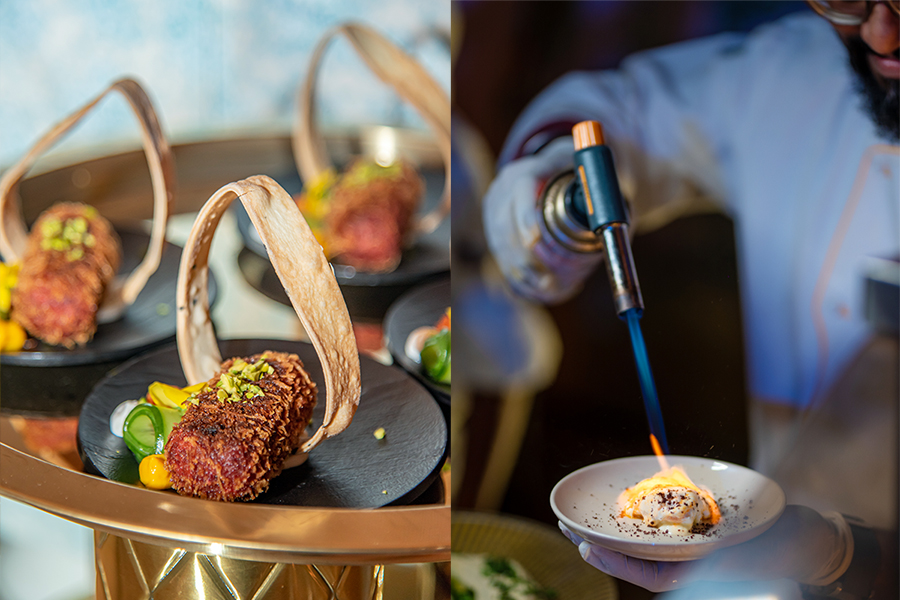 Solo lead
His first solo stint was gaining professional chef experience at ‘Sampan’ in Mumbai, under the tutelage of able chef Pempa, a maestro of Chinese cuisine. As he cooked, he saw Bollywood biggies like Amitabh Bachchan, Rakesh Roshan waltz in; they were frequent guests. When tired working all day behind the big burners, he’d walk along the beach and dream. He dreamt of achieving beyond his humble beginnings. “There’s no reason I can’t have this life, just because of where I am from,” he mused. He was of 24 years then.
Eventually moving from one odd job to the other and position to position, Sanjay then decided to add value to hotels that didn’t know things like kitchen design, menu design, staffing, training and pre-opening, customer satisfaction, and good food service. He made it his business to conduct operative sick restaurants by refurbishing their offerings. This consultancy business was run in the name of Hotel Aid which also got a reasonably good response.
Despite his dedication and intent, this struggle period was a rude wake-up call. “I would often get stood up by people, who would only pay me the advance and then vanish. It just seemed thankless,” he says with a tinge of pain. His biggest lessons in business were learned in this time. The biggest one - Why not do this for me, and build my own business? 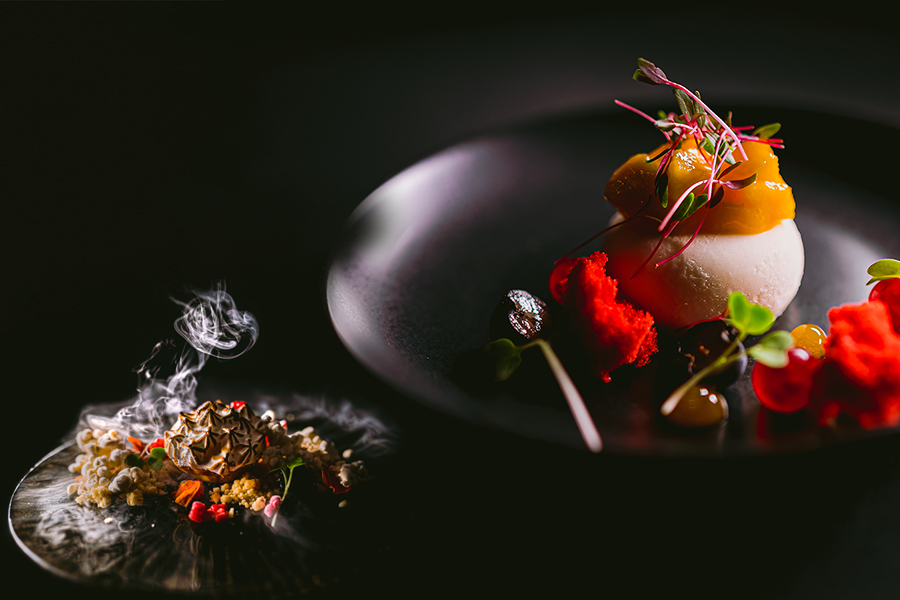 Gunning for the big league
Shortly after, they got an opportunity for their first event at the Radio Club to serve North Indian food for the club guests and its events from a support kitchen. Despite mi-nor hiccups, it turned out to be an instant success, and it put them on the map for bigger things. “People usually take 7-10 years to graduate to a place like Turf Club, Mumbai; for us, it took less than two years.”
After years of chasing the big league, the big league was now seeking him out. Stalwarts like Tina Ambani, Jaya Bachchan came rolling in to hire them for their events, all owing to the excellent word-of-mouth review of their service.
Local to global
Foodlink has unmatched expertise in managing global events now. They flew a crew of 60 for the wedding of a diamond merchant’s son at a Thailand 5-star hotel, chaat walas and chai walas included. It’s not uncommon for them to transport the team internationally - and have 80 people flown to Europe and 240 people to another destination wedding in a feat of its own.
“I’m fairly blessed with the team I have. When doing these high-profile events, there is positive pressure, but never hopelessness.” To them, challenges are just opportunities to prove themselves. Quickly, they went from desi local collaborations with chefs and creators in India to international ones. Ladurée, the world-famous pastry house from France, has an exclusive tie-up with them via which they have been introduced to India. They also have premium contracts with Potel et Chabot, Bubble Foods in London, and luxury giants Pinch from New York; it’s a storm of high-end caterers, and Foodlink is at its epicenter.
Their talent pool boasts of celeb chefs from Japan, Peru, Italy, and of course, India - part of their covetous inner circle. No matter the cuisine, there is an in-house chef in Foodlink who is the best in the trade for that cuisine. “In this work, there is just word-of-mouth; no other publicity helps. It’s all about delivery, delivery, and delivery,” says the master caterer.
Spreading the table
“When we were just starting out, we were happy just working hard at all the mahurats and weddings. We got recognized. We had passion, but barely any economic logic.” That changed around four years ago when once again, his friend Darshanbhai Patel, Founder and Managing Director of Vini Cosmetics Pvt. Ltd., goaded him into organizing the business, making it an institution beyond a catering company - a multi-city, multi-country operation. It was the push they needed to verticalize the business.
Today, Foodlink operates in 4 distinct verticals across Mumbai, Ahmedabad, Chandigarh, Bangalore, Chennai, Delhi, Turkey, Dubai, Europe, and beyond.
They operate in four main verticals - Luxury Catering, which is challenging but sort of Foodlink’s strong suit, their earliest foray, and conquest. There are Luxury Banquets, with a vision to exceed the standards of fine dining - sort of the Marriot of indoor banquets. And finally, there are Restaurants and Cloud Kitchens, flagged off with their premium offering ‘Art of Dum’, India Bistro, China Bistro (an homage to his long love affair with Chinese cuisine), and Glocal Junction, a 24-hour diner that transforms between brunch, barista, dinner and a high-energy bar with complete ease.
What keeps them ahead is their desire to create an unforgettable experience for their clients. “During Deepika and Ranveer’s wedding, we created the perfect Sindhi food for Ranveer and organized a South-Indian style sit-down meal for Deepika all the way in Lake Como, Italy. When it comes to important events, people are nostalgic; they like to go back to basics. And we like to deliver it for them,” says the cuisinier knowing the tastes of his clients all too well.
From having waited tables for 35 rupees to having catered for the weddings of some of the biggest names in the world, Sanjay Vazirani’s life story is a testament that when opportunity meets preparedness, you have the perfect rec¬ipe to cook up your own delicious good fortuneTo know more about Foodlink and its services Click Here, reach out to the sales@foodlink.in.The pages slugged ‘Brand Connect’ are equivalent to advertisements and are not written and produced by Forbes India journalists.