The Aventi A-10: The world's first supercar for your wrist that's not Swiss

The Aventi A-10 Collection, with its bold color options, as well as its flagship 100% Sapphire Crystal Case model, launches in April 2020 via crowdfunding 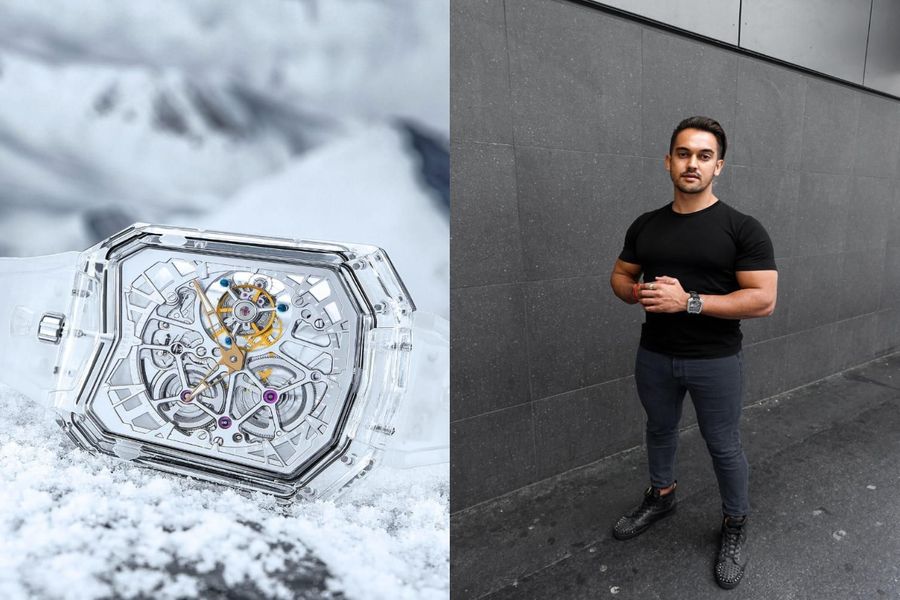 With the acquisition of Corum by China Haidan Holdings in 2013 and the steady influx of India-based companies into the luxury watch sector, can Aventi hammer yet another nail into the Swiss controlled near-monopoly?

Throughout history, the leaders in horology have changed hands many times over. Germany led the way, inventing the first portable clock, in close competition were the Dutch. French Huguenots, fleeing persecution, brought their artisan craft to Geneva during the Reformation in the 16th century. Britain also enjoyed a time in the horological spotlight.

Due to the high level of craftsmanship of early timepieces, watches were a rare luxury that became the global symbol of wealth and power. Esteemed watchmakers received personal commissions from royal families, their elite clientele waited decades before receiving their much-coveted prize. Unfortunate for early watch aficionados like Marie Antoinette, whose commissioned watch was finally completed by Breguet in 1827, 34 years after her beheading.

In a post-World War II America, Swiss watchmakers employed aggressive marketing to America’s wealthy giving rise to the Swiss-made luxury watch. And like its predecessors, these watches were the exclusive baubles of the ultra-rich.

Not long after, with their slick and inexpensive quartz movements, Japan challenged Swiss watchmakers with proven greater accuracy. Yet Swiss-made watches remained the pinnacle of skill in the world of mechanical movements. A near monopoly that has dominated haute horology ever since, a title that may soon fall due to strategic innovations by microbrands.

Once such brand is Aventi.

Many watchmakers that don’t use Swiss-made parts seem to dance around the issue, explaining why in an almost apologetic tone as their listeners seem to tune them out en masse.

Aventi Watch, doesn’t cower from the question. In fact, they welcome it. They purposely sought out a non-Swiss supplier with which to partner, for a high-quality tourbillon movement, openly rejecting offers from Swiss-based companies.

“We’re obviously not criticizing Swiss horological craftsmanship,” explains Aventi CEO, Hannu Siren, “But for Aventi, it simply wasn’t the best option out there.”

This isn’t the only bold statement coming out of this brazen new watch brand. Aventi, whose name means “Having”, believes that everyone should have access to the quality and feel of luxury that a high-end timepiece possesses.

In its early research and development phase, it was clear that Aventi would need a custom-made tourbillon movement, in order to fit inside the curves and angles of its supercar-inspired casing. Swiss movement companies quoted rates that would push the cost of Aventi’s watches into the very price-point they were adamantly against, hundreds of thousands of dollars, if not millions.

“The whole point of Aventi is to prove that power and precision doesn’t have to come with a price tag higher than a Central London Flat,” laughs Hannu.

It took over a year to find a movement company that offered the quality and price that Aventi sought. The movement had to meet several criteria: tourbillon, accurate, long-lasting, at a price point that was achievable by nearly everyone.

Quotes were obtained from all over the globe; Germany, Japan, United States to name a few. While they could meet some of the requirements, none of them were able to meet all of them. A compromise Aventi was not willing to make.

Finally, the brand contacted Hong Kong based PTS Resources and Hangzhou Watch company. With an impressive presence of over 30 years in the industry, and ISO 9000 compliance, Aventi finally found its partner.

“Everyone assumes that a watch has to be Swiss in order to be worth anything,” Hannu says, “Aventi proves them wrong.”

Reading through the specifications of the Aventi A-10 Tourbillon, the “engine” of this affordable luxury boasts all the same features of a watch ten, even a hundred, times its launch price. A twin barrel tourbillon with a frequency of 28,800 vph, 25 jewels, and a 72 hour power reserve makes this movement everything Aventi claims it is, a V12 engine for your wrist.

The Aventi A-10 Collection, with its bold color options, as well as its flagship 100% Sapphire Crystal Case model, launches in April 2020 via crowdfunding.

“We’re very proud of what we’ve created,” concludes Hannu, “Everyone thought we were crazy, telling us that what we wanted to achieve was impossible. They were wrong.”

For more information on how to support Aventi and be a part of horological history in the making. Disclaimer: The views, suggestions and opinions expressed here are the sole responsibility of the experts. No Forbes India journalist was involved in the writing and production of this article.
Show More
Thank you for your comment, we value your opinion and the time you took to write to us!

Tweets by @forbes_india
Commodity investments: A game of Chinese checkers
Hit by coronavirus, airlines fight it out in turbulent skies