Are Nanoparticles a Health Hazard?

There is a new industrial revolution taking place all around us. The only problem is we can’t see it.
The building blocks, being developed at the cost of billions of dollars by scientists, governments and multinational corporations, are just a few atoms or molecules thick — nanoparticles. Many are less than 100 nanometres (nm) — one-billionth of a metre — thick. A single human red blood cell in comparison is around 500 nm in diametre. 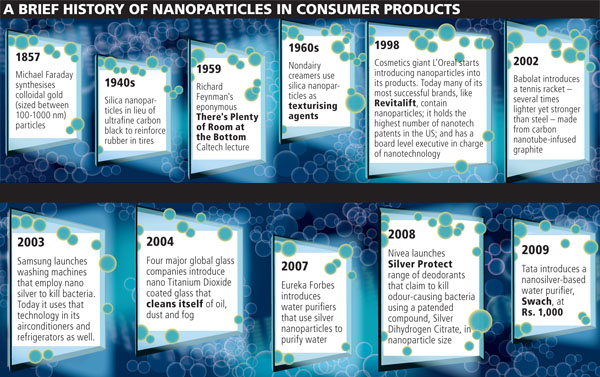 It’s a pity though that our eyesight isn’t good enough at nanometre level, for if it were, we would see that nanoparticles of precious metals like gold, silver and titanium have already made the jump from research labs to our homes. Manufactured nanoparticles are today present in thousands of consumer products around the world — silver in washing machines and water purifiers to kill bacteria, zinc in cosmetics to protect against ultraviolet rays, carbon nano-tubes in tennis rackets to make them stronger and lighter, titanium in household paints to decompose dust and grime without human intervention.
Nano is the New Black
“There’s Plenty of Room at the Bottom”
So went the classic lecture by the Nobel prize-winning physicist Richard Feynman in 1959 that many nano-ficionados now consider the conceptual sun of the nanotechnology universe. “Why cannot we write the entire 24 volumes of the Encyclopedia Britannica on the head of a pin?” he asked.
“Because there isn’t much of a point, or money, in doing so!” is the answer he would have got today from nanotechnology researchers. Instead their time is mostly spent figuring out newer properties for nanoparticles which can then be embedded into commercial applications.
Nanoparticles are highly reactive and prone to unusual properties. Describing gold, a metal that is normally inert to all other chemicals, Prof. C.N.R Rao, Honorary President and Linus Pauling Professor at the Jawaharlal Nehru Centre for Advanced Scientific Research (JNCASR) and the head of its Nanoscience centre, says “At 200-300 nm thickness, gold is not metallic, it does not shine — in fact it is not gold. And at 1.5-2 nm, it reacts like mad!”
Gold that is not gold when shrunk to nanometer size might sound like an absurdity to many, but it’s exactly this change in physical properties that make nanoparticles popular.
For example zinc oxide (ZnO) and titanium dioxide (TiO2) have been used as active ingredients in sunscreens for decades because of their ability to absorb ultraviolet rays and reflect back much of the other remaining sunlight. But they are both white — the reason many sunscreens leave a white residue on the face. When shrunk to nanometre size however, they become transparent without losing their light reflecting or absorbing abilities. 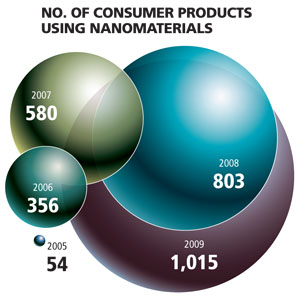 Silver, an ornamental metal and a powerful bactericide, can be reduced to nanoparticle form to destroy disease-causing bacteria from all kinds of places — kitchen counters, contaminated water, dirty clothes and stinky underarms.
Samsung claims its Silver Nano range of washing machines release hundreds of billions of silver nano-ions with each wash to kill over 99 percent of the bacteria found in dirty clothes, while the same technology when lined on the doors of their refrigerators kill bacteria that could spoil stored food. Eureka Forbes’ water purifiers use nanosilver-coated filters, developed by Prof. Pradeep, head of IIT-Madras’ Nanoscience department, to destroy harmful bacteria from drinking water. Swach, the mass-market water filter introduced by the Tata Group, also uses nanosilver (coated on rice husk particles) to purify drinking water. During the last flu pandemic threat authorities in Hong-Kong sprayed subways with nanosilver to disinfect them.
L’Oreal, the world’s largest cosmetics company, reportedly spends over $600 million each year researching and patenting nanoparticles. The head of its nanotechnology unit also sits on the management board.
Therefore a metal that is a poor second cousin to gold in a world where we value yellow over white, is the undisputed metal of choice in the nanoparticle world. In fact, silver is more popular than any other material, according to the database of consumer products using nanoparticles maintained by the Woodrow Wilson International Center for Scholars. No No, Nano!
While nanosilver, on account of its bacteria killing prowess, seems like manna from heaven for consumer product manufacturers, environmentalists aren’t that excited. Because, they say, not all bacteria are bad and meant to be killed. Good bacteria perform a host of functions in nature ranging from helping plants and soil fix nitrogen, removing excessive nitrates released by fertiliser usage from water sources and allowing animals to digest their food. Critics contend millions of nanosilver-based products are collectively releasing tons of it to the environment. This, they claim, not only destroys good bacteria but also increases the risk of bad bacteria developing resistance to antibiotics by virtue of constant contact with nanosilver. It also has the potential to affect large numbers of marine organisms.
The second charge against nanoparticles is that they affect organisms in ways not yet fully researched. Because nanoparticles are just a few hundred atoms big, they can penetrate through skin, tissue and in many cases even cell walls. They can ride along with the blood stream to various vital organs like the liver, heart, spleen or the brain. Though laboratory tests, albeit at much higher concentrations than those currently found in nature, have shown nanoparticles damaging and killing cells in mice, fish and other small living things, no one really knows their long term effect on the human body. 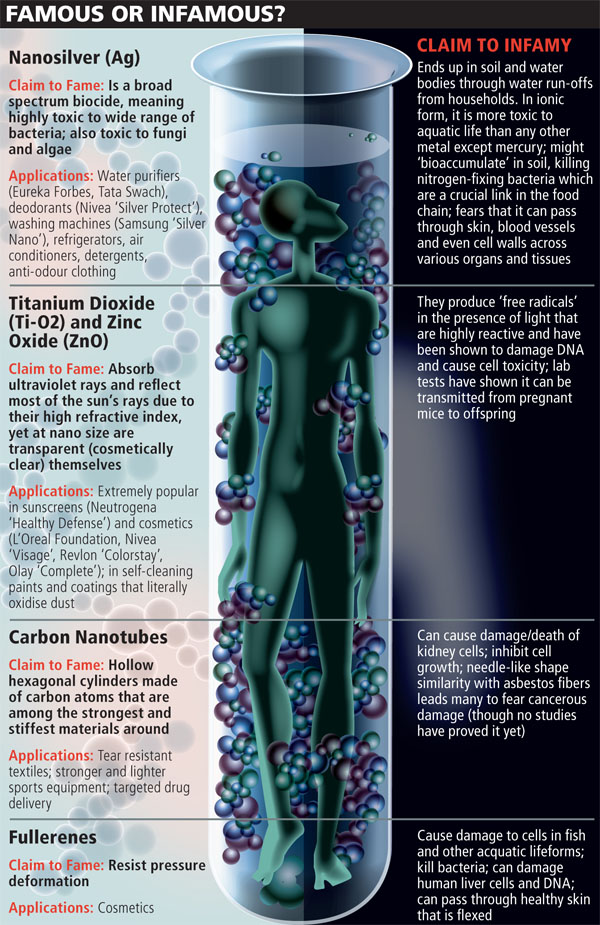 Dr. Samuel Epstein, professor emeritus of Environmental and Occupational Medicine at the University of Illinois’ School of Public Health, calls nanoparticles in consumer products “the next asbestos.” He says, “Nanoparticles pose an overwhelming public health risk. We have evidence that they penetrate through the skin, invade blood vessels, become distributed through the body, and have been associated with toxic effects.” Epstein adds, “We are dealing with something relatively new and dangerous. I think it’s even more dangerous than asbestos because the latter at least came with warnings.”
Not there on the Label
In spite of the rapid proliferation of nanomaterials in consumer products — the Woodrow Wilson’s Nanotech consumer inventory lists over 1,000 products — there is still little to no regulation that deals with it exclusively. Most drug and consumer product regulators around the world treat nanoparticles within the frameworks designed for bulk chemicals. Therefore, if silver was an approved ingredient, nanosilver too would be.
This, critics contend, ignores two important facts. First: The same material displays radically different properties in bulk form vis-à-vis nanoparticle form. Second: Toxic effects of nanoparticles on living beings are likely to manifest themselves after longer periods and in different manners compared to the bulk varieties. As early as 2004, UK’s Royal Society called for nanoparticles to be treated as new chemicals and for studies on their effects on human health and the environment.
In India too there is no specific regulation on the use of nanotechnology in consumer products. Meanwhile, if you were planning to read the label of a product to discern its nano-ingredients, you’d be disappointed. That’s because no regulator mandates separate listing of nano-ingredients, and therefore no manufacturer does so. In fact, many manufacturers are deliberately avoiding the word “nano” on their product labels to avoid getting caught in any controversy.
The word “nano” will rarely be found on the ingredient lists of cosmetic products like L’Oreal Foundation, Olay Complete, Revlon Colorstay or Nivea Visage, yet all of them do contain nanoparticles according to ‘Skin Deep’, the cosmetics database maintained by the US-based Environmental Working Group (EWG). L’Oreal, Hindustan Unilever (Olay) and Beiersdorf (Nivea) all declined to answer Forbes India queries on the subject.
“There is no regulation on label claims in India, no trial mechanism to demonstrate the claims.
Therefore, in a court of law it’s the consumer’s word versus the manufacturer’s word.” says Muralidharan Nair, a partner at Ernst & Young. What India needs, he says, is stricter labelling laws like in Japan, where manufacturers have to list not just ingredients but also their specific properties and effects on the body.
In the absence of precise labelling, even an advanced laboratory has no way of finding out which nano-ingredient is present in a product if they don’t already know which one to look for, says Rao. “If they [manufacturers] don’t label it, you have no way of finding out.”
“When people use nanoparticles in close association with their bodies, like a skin lotion for instance, we owe to the customer to be told that the product contains nanoparticles,” he says.Infographics: Malay Karmakar