Sanjoy Bhattacharyya: While Investing in Markets, Watch the Grass Grow

Punts on hot tips are suicidal, and it is wise to be prepared for the unexpected 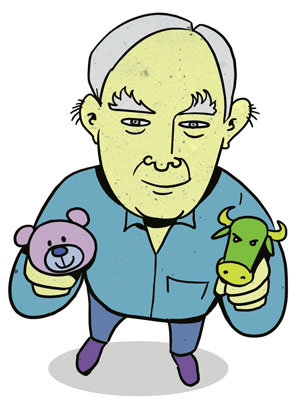 As the markets trade higher by 41 percent from mid-May last year, many are beginning to challenge the sacred dictum of “mean reversion”. The heretics are quick to point out that on only three occasions during the entire period did the market dip by more than 10 percent, and the worst of these bear hugs led to just a 13 percent tumble. With corporate earnings rebounding in style led by 7 percent plus GDP growth and commodity prices cooling off, are we likely to witness M.S. Dhoni defending the cause of the vanishing bear any time soon? Not really. The recent level of the BSE Sensex is exactly the same as on September 30, 2009. One look at the dismal numbers for gross capital formation during the last fiscal puts to rest the dream of the next roaring bull market driven by resurgent infrastructure investments and policy reform. So, are all the old mantras such as buy and hold, diversification and the need to maintain a balanced outlook about the future no longer valid? To my way of thinking, the most important lessons of the year gone by all point in the other direction.

The first lesson is best expressed in the words of Niels Bohr, Nobel laureate for Physics in 1922: “Prediction is very difficult, especially if it’s about the future.” Most of the wise men were trumpeting the dawn of a new age for the telecommunications sector with Bharti Airtel being the leader of the pack. But then, first the nuptials were called off and when the second bride came to the party, TRAI played spoilsport for the entire industry. A serious investor must recognise that he really has no clue about what will happen next week, let alone next year.

Your columnist had the ignominy of learning the second lesson when he got infatuated with the price of raw sugar on international commodity exchanges. Much wiser — and need I mention it, poorer — for the experience, it has finally sunk home that when something is too good to be true, it usually is. Typically, most individuals are happy to wait for a “clearance sale” to get the best bargain. The only instance the rules change for most is while buying a share! The fear of missing out leads to comic behaviour — buying high and selling low.

The third lesson on offer last year was, prepare for the unexpected. Perhaps, the best example was the probability that most investors assigned to a sovereign default 12 months ago and the consequences of the farce in Greek bonds as it unravelled. So the best protection against being caught off guard is to expect to be surprised. If what “everybody knows” is reflected in the stock price, the price will hardly move when it turns out to be true. Since everybody knows nothing of any value, it’s best to avoid the herd. Instead, try to find a less obvious opportunity that others have somehow overlooked.

So, what is the way forward? Paul Samuelson hit the nail on the head: “Investing should be dull…like watching watching grass grow. If you want excitement, take some money that you are happy to lose and go to Las Vegas.”

Tweets by @forbes_india
Big Ideas for a Better Future
Dr.Vikram Sheel Kumar: What Keeps Us Going