Steve Forbes: Elephant in the room-money

A stable currency is a must for economic greatness. Therefore, striving countries should start by fixing their currencies to either the dollar or the euro 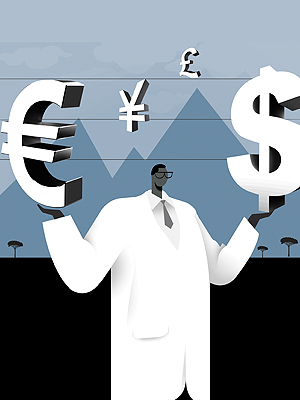 Developing countries such as Brazil, Indonesia, India and South Africa have made clear their ambition to grow into global economic powerhouses. Turkey’s government has openly declared its goal to become one of the top 10 economies by 2023 (it ranks 18th today).

But all of these nations have overlooked a crucial requirement of economic greatness: A stable currency. Investors and entrepreneurs yearn for sound money, just as marketplaces function best when weights and measures are reliable and fixed.

China grasped that truth in the early 1990s and, in 1994, fixed the yuan to the US dollar, as Hong Kong had done with its dollar a decade before. China’s trade, and its economy, boomed. (So ludicrous has economic thinking become that the US complained this was an act of economic warfare, “currency manipulation”. American officials believed that because the Chinese economy was doing well, its currency should rise against the dollar, just as if the yuan were an equity. By this kind of reasoning, the dollar in credit-challenged Illinois should be worth less than it is in thriving North Carolina.)

Countries have long been told by “development experts” at the IMF and elsewhere that devaluing their currencies would help them grow by making their exports cheaper and imports dearer, a modern variant of the old mercantilist superstition that plagued much of Europe from the 1500s to the 1700s, which held that a country’s power came from hoarding gold and silver. Today the cry for a country is: Get a merchandise trade surplus! Cheapening a currency, however, is repellent to foreign and domestic investment. Investing is risky enough, but if the risk is compounded by uncertainty over the value of the currency from which future income streams flow, then, perforce, there will be less risk-taking. Money is the means by which we trade with one another and invest. Hinder that, and we suffer. Money itself is not wealth. It measures value the way clocks measure time and scales measure weight.

Ambitious countries must grasp the fact that economies with sound monetary policies always outperform those with chronically unstable money. Britain is a classic example of this truth. Even though in the late 1600s it had a solid representative government (by the standards of the time), strong property rights and a robust tradition of innovation (its textile and shipbuilding industries were technically far ahead of those on the continent, and the English farmer was three times more productive than his French counterpart), Britain was a second-tier power. Then it latched onto the concept of sound money and fixed the pound to gold. This small island became a globe-girdling empire and home to the Industrial Revolution. Its capital mushroomed, financing not only what became the world’s largest economy but also the development of much of the rest of the world, including the US.

Within a few years after WWII, defeated Germany and Japan lashed their currencies to the gold-backed dollar. This, combined with repeated reductions in taxation (a course Britain had followed for most of the 19th century but then forgot until Margaret Thatcher’s ascendancy), rapidly turned these once prostrate nations into rich, world-class economies.

So what should striving countries do today? They should start by formally fixing their currencies to either the dollar or the euro. In the 1990s, the Baltic states of Lithuania, Latvia and Estonia tied their currencies to either the US dollar or the Deutsche mark. Lithuania and Estonia each used a currency board, whereby their currencies were backed almost 100 percent by a stable currency. Subsequently, all three countries adopted the euro and have prospered from these moves. Turkey, for example, could formally tie its ominously weakening lira to the euro and thereby avoid another debilitating slide into a big inflation.

A currency board would work wonders for beleaguered Ukraine. It’s no surprise, given Vladimir Putin’s aggression, that Ukraine’s currency, the hryvnia, has slid sharply, hurting the economy. The move to a currency board would strengthen Ukraine, helping it to survive until the US elects a president who knows something about foreign policy.

India, whose loose-money habits have long hindered growth, could start by attaching the rupee to the dollar and/or the euro. In a few years, India would be in a position to take the next step and adopt a gold standard. Within a generation of doing that, it would surpass the economy of its former colonial master, Britain, as well as that of China.

How to treat capital
Companies, as never before, have been buying back their stock. They’re also returning capital by boosting dividends. Unlike in the 1990s and early 2000s, when companies purchased shares and then effectively reissued them to executives and directors as part of their compensation, these buybacks are the real deal: They’re shrinking the number of shares outstanding. Of course, some of these moves nowadays are financial engineering: Stagnant earnings look better when spread over fewer shares. IBM became the poster boy for this. And, amazingly, other critics declared that returning capital on this scale was a form of short-term corporate behaviour: Make shareholders happy now at the expense of funding critical research and development and long-term capital expenditures that would secure a company’s future financial health.

Actually, the current wave of returning capital to stockholders should be applauded, not denigrated. It’s a stark and healthy contrast to what’s happened in the past, especially in the 1960s and 1970s, when companies had a lot of cash on their hands. In those days, the tax code punished returns of capital. The corporate tax rate was 48 percent, compared with the 35 percent federal rate today. The highest tax rate on investment income for individuals was 70 percent. The capital gains levy was 25 percent, which was raised in 1970 to 35 percent (by 1976, the maximum rate was almost 50 percent). Back then, individuals, not institutions, owned most stock. You don’t have to be a finance major to see that returning capital by either dividends or stock buybacks meant transferring wealth to Uncle Sam.

The result was that corporate chieftains were tempted into expanding their domains by buying other companies or diversifying into new businesses they really didn’t understand. Conglomerates—corporate collections of different, unrelated businesses—proliferated. The theory that a capable executive could quickly learn to run any business if he crunched enough numbers became conventional wisdom. I recall attending a dinner at which the CEO of a large can company justified his acquisition of a large commercial insurance company, saying, “It’s a sure-fire way to increase earnings per share!” In fact, conglomerates loved trying to buy property and casualty insurance companies in order to get their hands on assets these outfits held in reserve for future insurance claims.

Almost all conglomerates flopped and were busted up. The only one that has stood the test of time is the original one: General Electric.

The lowering of tax rates, especially under US President Ronald Reagan, made the corporate hoarding or inefficient use of capital no longer viable. Activist investors are sure to pounce if they see idle capital sitting on a balance sheet or if a company isn’t running its businesses efficiently.

So why isn’t there more business investing? Because government policies have created a hostile environment. The Federal Reserve has profoundly disrupted the systematic functioning of our credit markets, to the detriment of small and new businesses. An ever volatile dollar hinders investment. Our horrific tax code—the US corporate tax rate is now the highest in the developed world—is a dampener. The cascade of regulations requires deploying more and more precious brainpower on dead-end activities.

Cheer, then, for equity buybacks and higher dividends. And work to make sure that we get candidates at all levels who have some semblance of understanding free markets and what enables them—which are we, the people—to blossom.