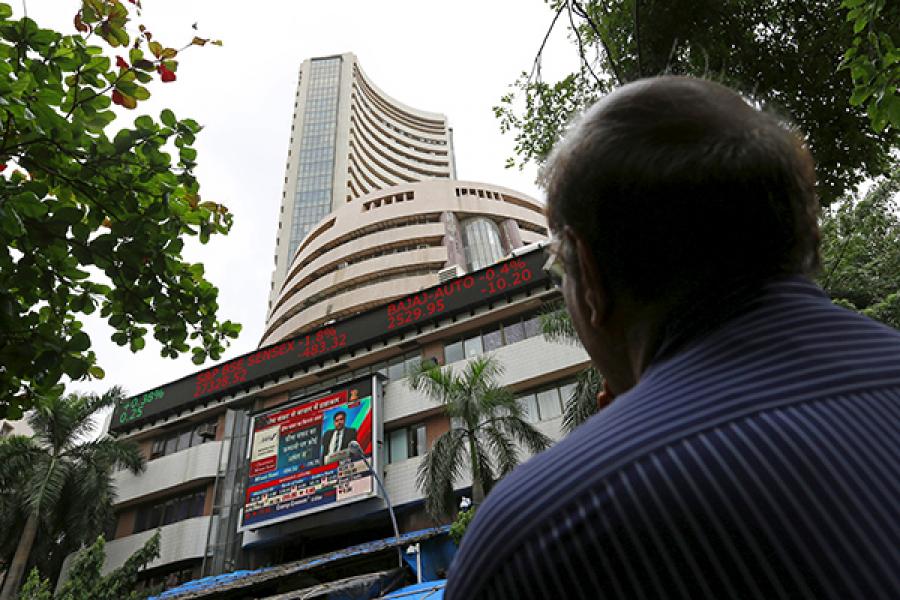 Hitesh Agrawal, head of research with Reliance Securities said that India’s stock markets could bottom out over the next three weeks, as by that time there would be clarity on the progress of monsoon activity across India

India, like most emerging markets, will continue to face headwinds from the Greece crisis, which is being seen as a possible contagion risk for some developing markets. A bottom for India’s markets could, however, be seen in about 2-3 weeks, experts said.

On Monday, the benchmark 30-share Sensex index closed at 27,645.15 points, down 0.60 percent or 166.69 points, its lowest point since April-end, as a further sell-off from foreign investors loomed.

Foreign portfolio investors have been selling Indian shares since May this year - worth Rs 84.88 billion– as domestic economic growth has yet to pick up in a major way and corporate earnings remained weak.

On Monday, the Indian rupee slid against the dollar to 63.86, down 0.6 percent from its previous close – the most since June 8. Yields on India’s 10-year bonds were at 7.89 percent.

Last week, in Greece, their Prime Minister Alexis Tsipras called a referendum on July 5 when voters in Greece will decide whether to accept a bailout deal by creditors. Greek banks will remain closed until the referendum is held.

India, like several emerging markets, has seen a flight of capital already. Foreign investors would like to lighten their positions further,” says Agrawal.

“Greece’s decision to hold a referendum has increased the odds of it exiting the Eurozone. But this decision will depend on the final agreement between Greece and euro, post the referendum,” says Vinod Nair, head of fundamental research, Geojit BNP Paribas Financial Services.

Nair said on Monday that India’s markets showed a bit of “resilience” by bouncing back 435.96 points from an intra-day low of 27,209.19. But global investors will be at a risk-off mode, by the time the final outcome will be understood, Nair said.

Nomura analysts, in a latest report, say that beyond the short-term ‘knee-jerk’ negative market reaction seen, they do not expect it to escalate into a systemic European crisis. The rationale for this is that unlike previous global concerns in 2011-12, the Greek drama has now been unfolding for several years. “So now it is much less of a surprise to financial markets,” says Nomura’s chief economist and managing director Rob Subbaraman, in a note to clients.

Also, Greece has a small economy that comprises less than two percent of euro area GDP, and compared to 2011-12, the rest of the euro area is in a much stronger economic position.

India’s rupee was trading at 63.86 to the dollar, a near two-year-low, in evening trade. Analysts expect the rupee to remain subdued for at least six months due to the Greece factor and its fallout and until local inflationary pressures weakened further.

“We expect the rupee to remain in the 62-64 range for the next six months,” says Naveen Mathur, associate director (commodities and currencies), Angel Broking.

Agrawal said India’s stock markets could bottom out over the next three weeks, as by that time, there would be clarity on the progress of monsoon activity across India and the Greece turmoil. Also, fund managers who were underweight on India may also want to relook at India, considering that China has fallen out of favour with global investors in recent weeks. [The Shanghai composite index has fallen by 19 percent since June 12].

But for foreign inflows to improve in a major way, a recovery in corporate earnings growth would be needed.

Tweets by @forbesindia
Steve Forbes: Elephant in the room-money
Beautiful People: Reflecting on a world of clones