The pandemic has disrupted relations among the masses, the elites and the celebrities—from Ellen DeGeneres to Priyanka Chopra—who liaise between them 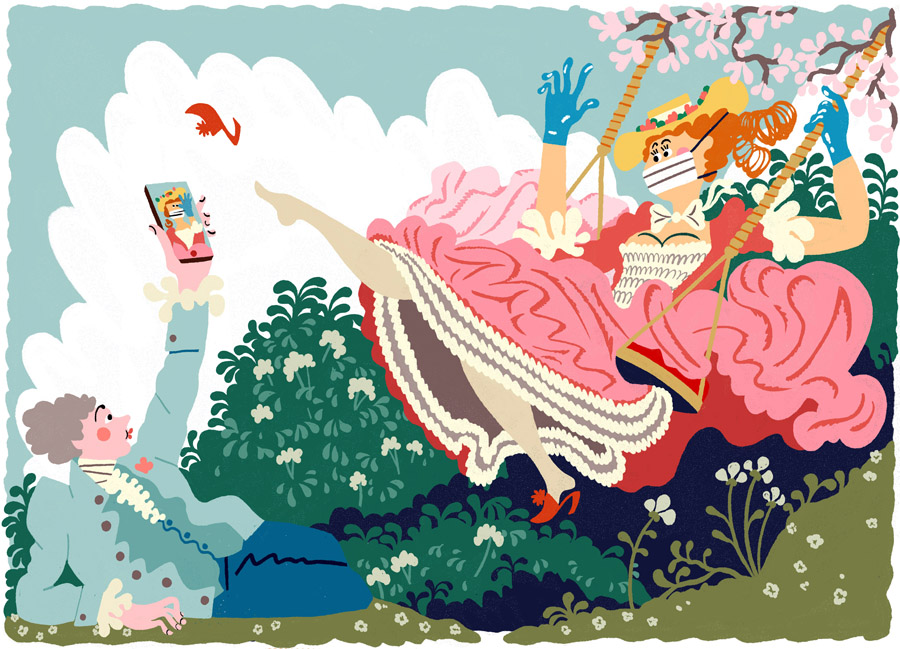 Among the social impacts of the coronavirus is its swift dismantling of the cult of celebrity. The pandemic has disrupted relations among the masses, the elites and the celebrities who liaise between them. (Cari Vander Yacht/The New York Times)

America is in crisis, but the celebrities are thriving. They are beaming into our homes, reminding us to stay indoors and “stay positive,” as “we’re all in this together.” When I watch their selfie public service announcements, I find my attention drifting to the edges of the frame: to the understated wall molding visible behind Robert DeNiro’s shoulder; to the Craftsman beams on Priyanka Chopra’s balcony; to the equine wallpaper framing Zoë Kravitz’s crackling fireplace.

“Staying home is my superpower,” Gal Gadot, the “Wonder Woman” star, reported from her walk-in closet. Ryan Reynolds urged his fans to “work together to flatten the curve” from within his rustic loft. When Jennifer Lopez posted a video of her family sheltering in the backyard of Alex Rodriguez’s vast Miami compound, the public snapped.

“We all hate you,” was one representative response.

Among the social effects of the coronavirus is its swift dismantling of the cult of celebrity. The famous are ambassadors of the meritocracy; they represent the American pursuit of wealth through talent, charm and hard work. But the dream of class mobility dissipates when society locks down, the economy stalls, the death count mounts,and everyone’s future is frozen inside their own crowded apartment or palatial mansion. The difference between the two has never been more obvious. The #guillotine2020 hashtag is jumping. As grocery aisles turn bare, some have suggested that perhaps they ought to eat the rich.

So when Pharrell Williams asked his followers to donate to aid front-line responders, they virtually grabbed him by the pants and shook him upside down, telling him to empty his own deep pockets. Kristen Bell and Dax Shepard have been “outed” as landlords. As Ellen DeGeneres lounged on her sofa, video-chatting with famous friends, comedian Kevin T. Porter solicited stories from service workers and Hollywood peons who had experienced run-ins with DeGeneres, whom he called “notoriously one of the meanest people alive.”

The film “Parasite,” in which a poor South Korean family cleverly cons its way into the home of a rich one, has been converted into a well-worn social-media retort whenever celebrities offer glimpses inside their own manses; the reference succeeds partly because so many superrich people have such blandly similar minimalist homes.

It must be a very hard time to be so famous. Celebrities are not among the very wealthiest Americans — Lopez’s reported net worth is a fraction of a percent of Jeff Bezos’s — but they are the ones who are tasked with liaising with the general public, offering vicarious access to their lifestyles. Celebrity culture glorifies them not just for their performances or personas but for their wealth itself — their blowout child birthday parties, car collections, plastic surgeries and property ownership. From “Lifestyles of the Rich and Famous” to “My Super Sweet Sixteen” and “Keeping Up With the Kardashians,” the ability to watch (or hate-watch) this spectacle of excess has functioned as a bizarre appeasement for inequality.

But this compact rests on the celebrity’s ability to seem to move easily between the elite and the masses, to be aspirational and approachable at once. And under normal circumstances, they are accustomed to receiving accolades for “using their platforms” to “raise awareness” in the service of bland initiatives for the public good.

But our awareness has never been so easy to rouse and misuse. Celebrities have a captive audience of traumatized people who are glued to the internet, eyes darting toward trending topics for clues to processing the unimaginable horrors looming just outside, and instead are finding Madonna bathing in a rose petal-strewn bath.

Stunts like Gadot’s crowdsourced famous-person cover of John Lennon’s “Imagine” are tone-deaf in more ways than one. Most of these people cannot even sing; their contributions suggest that the very appearance of a celebrity is a salve, as if a pandemic could be overcome by star power alone.

But if I’m going to pay attention to celebrities at a time like this, their contribution better be charming or deranged enough to distract me from the specter of mass suffering and death. Even as the power of pure celebrity tanks, the value of a true entertainer rises. Give me Patti LuPone on the jukebox and Yo-Yo Ma on the cello. Give me Anthony Hopkins playing the piano for his purring cat. Give me January Jones boiling up a “human stew” in her bathtub and Wendy Williams showing off the 5-foot Betty Boop statue that she spray-painted to appear black. Give me the hand-drawn hearts on Stevie Nicks’ note reporting that she is ensconced with her assistant and dogs, self-soothing with the music of Harry Styles.

Give me Britney Spears, who has emerged from this crisis as the rare celebrity to tap into the need for radical social change. Spears recently posted a bright yellow manifesto on Instagram from internet artist Mimi Zhu. “We will feed each other, re-destribute wealth, strike,” it reads. “Communion moves beyond walls.” Spears added three red roses to the caption, an ambiguous symbol reflecting either her support for the Democratic Socialists of America or perhaps her simple affinity for floral emoji.

Spears is an unexpected figure to lead us through quarantine but a fitting one: She has been held under a conservatorship for 12 years, her movements and finances controlled by her father and overseen by the courts. When she posts about finding community in social captivity, she knows what she’s talking about.

Tweets by @forbes_india
Good news? Data shows restrictions are slowing coronavirus infections
2 keys that will unlock mass adoption of cryptocurrency and blockchain in 2020