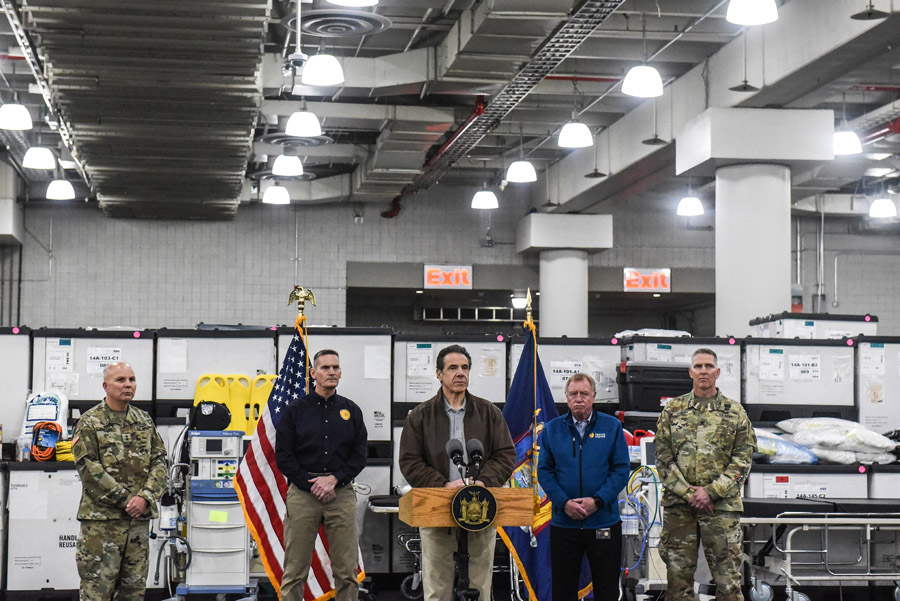 Gov. Andrew Cuomo during a coronavirus news conference the Javits Center in New York, March 23, 2020. Harsh measures, including stay-at-home orders and restaurant closures, are contributing to rapid drops in the numbers of fevers, a signal symptom of most coronavirus infections, recorded in states across the country, according to intriguing new data produced by a medical technology firm Kinsa. (Stephanie Keith/The New York


Harsh measures, including stay-at-home orders and restaurant closures, are contributing to rapid drops in the numbers of fevers — a signal symptom of most coronavirus infections — recorded in states across the country, according to intriguing new data produced by a medical technology firm.

At least 248 million Americans in at least 29 states have been told to stay at home. It had seemed nearly impossible for public health officials to know how effective this measure and others have been in slowing the coronavirus.

The company, Kinsa Health, which produces internet-connected thermometers, first created a national map of fever levels on March 22 and was able to spot the trend within a day. Since then, data from the health departments of New York state and Washington state have buttressed the finding, making it clear that social distancing is saving lives.

The trend has become so obvious that on Sunday, President Donald Trump extended until the end of April his recommendation that Americans stay in lockdown. Trump had hoped to lift restrictions by Easter and send Americans back to work.

“That would have been the worst possible Easter surprise,” said Dr. Peter J. Hotez, dean of the National School of Tropical Medicine at Baylor College of Medicine in Houston, who added that he thought the Kinsa predictions were based on “very robust technology.”

Kinsa’s thermometers upload the user’s temperature readings to a centralized database; the data enable the company to track fevers across the United States.

Owners of Kinsa’s thermometers can type other symptoms into a cellphone app after taking their temperature. The app offers basic advice on whether they should seek medical attention.

Kinsa has more than 1 million thermometers in circulation and has been getting up to 162,000 daily temperature readings since COVID-19 began spreading in the country.

The company normally uses that data to track the spread of influenza. Since 2018, when it had more than 500,000 thermometers distributed, its predictions have routinely been two to three weeks ahead of those of the Centers for Disease Control and Prevention, which gathers flu data on patient symptoms from doctors’ offices and hospitals.

To identify clusters of coronavirus infections, Kinsa recently adapted its software to detect spikes of “atypical fever” that do not correlate with historical flu patterns and are likely attributable to the coronavirus.

As of noon Wednesday, the company’s live map showed fevers holding steady or dropping almost universally across the country, with two prominent exceptions.

One was in a broad swath of New Mexico, where the governor had issued stay-at-home orders only the day before, and in adjacent counties in southern Colorado.

The second was in a ring of Louisiana parishes surrounding New Orleans, but 100 to 150 miles away from it. That presumably was caused by the outward local spread of the explosion of infections in New Orleans, which officials believe was set off by crowding during Mardi Gras.

By Friday morning, fevers in every county in the country were on a downward trend, depicted in four shades of blue on the map.

Fevers were dropping especially rapidly in the West, from Utah to California and from Washington down to Arizona; in many Western counties, the numbers of people reporting high fevers fell by almost 20%. The numbers were also declining rapidly in Maine.

The parts of New Mexico and Colorado that had been slightly “warm” on Wednesday were in light blue, indicating that they were cooling. So were the Louisiana counties.

As of Monday morning, more than three-quarters of the country was deep blue. A separate display of the collective national fever trend, which had spiked upward to a peak on March 17, had fallen so far that it was actually below the band showing historical flu fever trends — which meant that the lockdown has cut not only COVID-19 transmission but flu transmission, too.

“I’m very impressed by this,” said Dr. William Schaffner, a preventive medicine expert at Vanderbilt University. “It looks like a way to prove that social distancing works.”

“But it does shows that it takes the most restrictive measures to make a real difference,” he added.

For some hard-hit cities, Kinsa also sent The New York Times fever data plotted on a timeline of restrictions enacted by mayors or governors.

Those graphs, Schaffner noted, showed that simply declaring a state of emergency or limiting the size of public gatherings did not affect the number of people reporting fevers.

But closing restaurants and bars and asking people to stay in their homes produced dramatic results in all three cities.

For example, in Manhattan, reports of fevers steadily rose during early March, despite a declaration of emergency on March 7 and an order on March 12 that public gatherings be restricted to less than 500 people.

The turning point began on March 16, the day schools were closed. Bars and restaurants were closed the next day, and a stay-at-home order took effect on March 20. By March 23, new fevers in Manhattan were below their March 1 levels.

By Tuesday, the hospitalization rate took four days to double. This is roughly what the fever readings predicted, said Nita Nehru, a company spokeswoman.

Shown the Kinsa data, Dr. Howard Zucker, New York state’s health commissioner, called it “a great example of technology being able to show what we think we’re experiencing — and it’s consistent with our data.”

“People need to know their sacrifices are helping,” said Inder Singh, founder of Kinsa. “I’ve had friends text or call and say: ‘Inder, this seems overblown. I’m sitting at home by myself, I don’t know anyone who’s sick, why am I doing this?’”

Kinsa’s tracking of fevers in Miami-Dade County in Florida showed an even more pronounced trend, and the company had tried to raise the alarm.

In early March, Florida beaches and bars were packed with spring break revelers, despite warnings that crowding was dangerous. On Kinsa maps that normally look for flu trends, fever levels were soaring.

Singh tried to get the word out, but the San Francisco-based company is relatively obscure and almost no one paid attention.

”It was so frustrating,” said Nehru, the company spokeswoman. “For three days from about March 19 on, Inder was calling local government folks in Florida, The Tampa Bay Times and other papers. The government did absolutely nothing.”

“Plus, we were getting pushback on social media,” she said. “People were saying, ‘The testing doesn’t show this, you know, is your data wrong?’ and ‘Could it be that you were just selling more thermometers in Florida?’”

On March 12, a state of emergency had been declared, but according to Kinsa’s data, fevers were continuing to rise. Closing local schools on March 16 had little effect.

But on March 18, Miami’s bars and restaurants were closed, and within two days reports of fevers started to drop sharply, according to Kinsa’s data.

But the damage may have been done. Now Florida is reporting that coronavirus cases are soaring, and its hospitals expect to be overwhelmed.

The refinement Kinsa made on March 22 was to add “trends” — a map showing whether all fevers were increasing, decreasing or holding steady.

“Finally, people are asking us for our data,” Singh said Monday. “We’re talking with six states about them distributing more thermometers. People understand the value now.”

Tweets by @forbes_india
BS VI: What it means for the auto industry
Coronavirus casualty: Celebrity culture is burning