BS VI: What it means for the auto industry

The BS VI emission norms are good for the environment, but the rising costs that will come along may dampen the industry mood 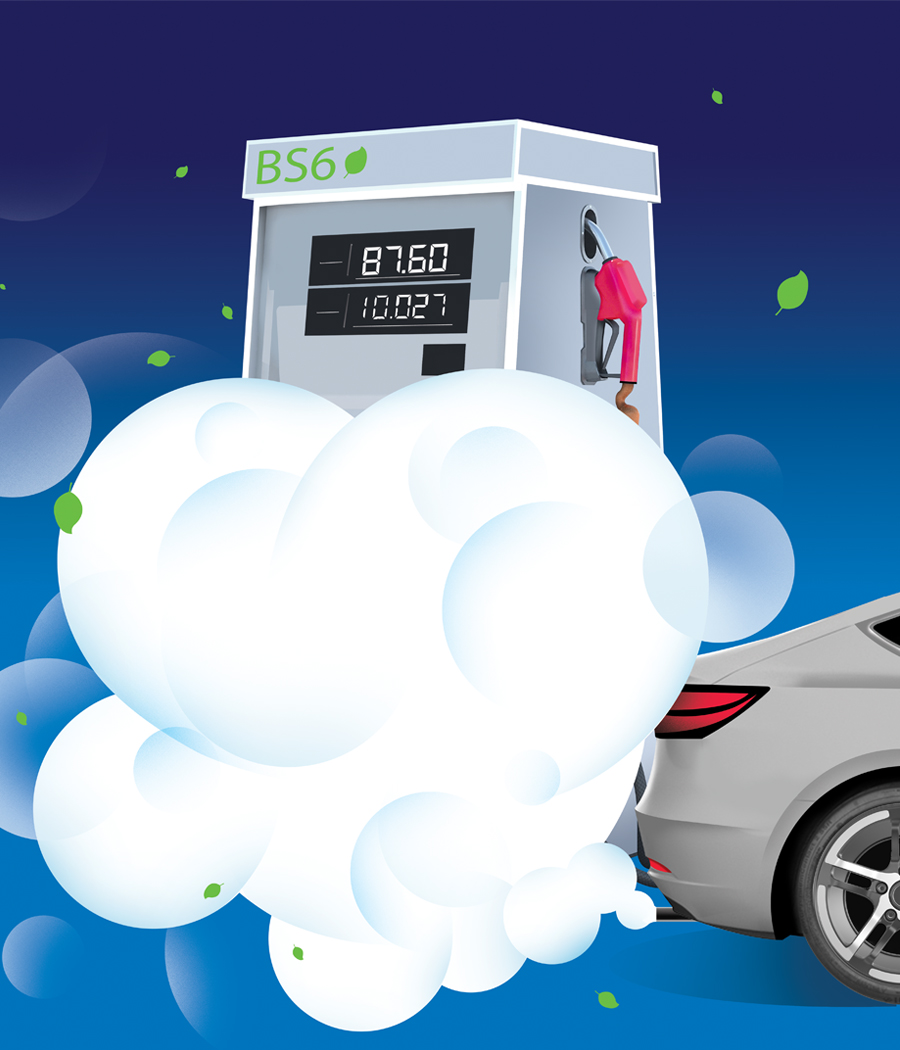 From April 1, when the Bharat Stage (BS) VI emission norms come into effect, a lot more will change apart from the composition of exhaust fumes of new cars. Consumers of passenger vehicles will have fewer models to choose from while buying a car and the cars will cost more, as will their BS VI compliant fuel. The effect that the combination of these factors will have on the Indian auto industry—already struggling with the worst slowdown in sales for over a year—is yet to be seen. While some predict the continuation of tepid consumer response, others pin their hopes on the launch of new models to pique consumer interest.

On February 19, 2016, the ministry of road transport and highways had issued a draft notification of BS VI emission standards for all major on-road vehicle categories in the country, including light- and heavy-duty vehicles, as well as two- and three-wheelers. The government had confirmed that the country would leapfrog BS V level emission standards and move directly to the more stringent and robust BS VI (see: What’s new with BS VI). There were two reasons for this switch: One, the rising level of vehicular pollution in India and the effect it had on public health (see: The burden of vehicular pollution); two, reducing the pressure and investment costs of oil refineries to first implement BS V and then BS VI.

The time frame, however, within which this switch was to be made was one of the toughest in the world. The European Union had implemented Euro IV emission standards in 2006, Euro V in 2011, and Euro VI in 2015. In India, nationwide implementation of BS IV standards took place from 2017, just three years before the country was mandated to switch to BS VI standards from this April.

While this has led car makers to invest more on their research and development (R&D) departments, it has also meant that the total number of BS VI-compliant models available in the market from April will be lower than that of BS IV models available earlier. This is because some car makers—such as Maruti Suzuki, Volkswagen Passenger Cars India, Hyundai and Nissan—will be discontinuing their BS IV diesel variants without replacing them with BS VI-compliant diesel versions; however, they may have BS VI petrol variants in their portfolios.

“Though there has been news that some companies will discontinue their diesel variants, lately some of these companies have also stated that they are open to looking at diesel options in the near future,” says Rajesh Menon, director general of the Society of Indian Automobile Manufacturers (Siam). “Irrespective of diesel or petrol, the number of models available on April 1, 2020, will be lower. The time available to the industry to transit from BS IV to BS VI has been just three years, which is unprecedented anywhere in the world. Hence, it cannot be expected from all vehicle manufacturers to develop the entire BS VI portfolio in such a short time.”

However, they also point to the falling demand for diesel variants in small cars. “There is no business for diesel variants among small cars,” says Steffen Knapp, director, Volkswagen Passenger Cars India. “The total distance that most consumers drive within the city is small, and the price difference between petrol and diesel has been reducing over the years.” He adds that three years ago, 60 percent of Volkswagen’s small car Polo that was sold in India was the diesel variant, while in 2020 it is down to 10 percent. The company has now discontinued the diesel variant altogether, and has only the petrol variant of this model.

Knapp’s views on demand for diesel cars is borne out by data from Siam, which shows that in 2013-14, the share of diesel models in the sale of new cars was about 42 percent, whereas in the period between April 2019 and January 2020, it has fallen to 13 percent.

Another company that will be discontinuing all its diesel variants is Maruti Suzuki, which had seen much success with models such as the Swift, Baleno and Ciaz. “The company announced in April 2019 that it would phase out diesel cars after BS VI implementation in April 2020,” says a spokesperson for the company. The compact segment accounted for 49.7 percent of Maruti Suzuki’s sales in 2017-18. The segment comprises models such as the WagonR, Ignis, Celerio, Swift, Baleno and Dzire. “Currently, all petrol models offered by Maruti Suzuki are BS VI-compliant.”

Although both Volkswagen and Maruti will have only petrol variants in their current portfolios, they are not giving up on diesel entirely. The new petrol models that Volkswagen has launched this year—the Tiguan Allspace and the T-Roc (both SUVs)—are fully built units being imported from Mexico and Portugal respectively, where the company has existing facilities to build Euro VI-standard cars. “Although we are launching both small and large SUVs with petrol engines, we will be investigating diesel options for the future,” says Knapp. Similarly, Maruti Suzuki says it will continue to monitor customer feedback. “In case there is demand for diesel cars after the introduction of BS VI regulations, we may reconsider our decision. At present, we are closely monitoring customer feedback to BS VI diesel cars,” the spokesperson adds.

The paucity of options in the small and compact segments, however, is contrasted by the continuation and introduction of BS VI-compliant diesel models in the large car and UV segments. Models such as Kia Seltos, Hyundai Venue, Creta and Tucson, Jeep Compass, Tata Harrier, and Ford Ecosport are UVs that will be available in diesel variants, as will be sedans such as Hyundai Elantra and Verna. Among the large UV makers, for instance, Toyota will continue its diesel variants for Fortuner and Innova. More than 60 percent of the company’s sales came from these two models between January and September 2019, with diesel vehicles accounting for 85 percent of volumes.

Because of the price of vehicles in these segments, manufacturers feel they can assimilate the cost of introducing BS VI technology. For instance, MG Motor India, a new entrant to the country, has said it only makes sense to offer BS VI-compliant diesel options in vehicles that are priced over ₹15 lakh. The rapid growth in the UV segment is another reason why manufacturers are willing to bet on diesel variants in this category. Siam data shows the cumulative growth rate in the SUV segment has been 12 percent between 2013-14 and 2018-19, whereas the figure is 5 percent for small cars in the same period.

“Customers of the mid-size and executive segments are considering entry-level SUVs before making a purchase decision, as there are some additional benefits of SUVs,” says Menon. “These include higher ground clearance that make them better suited for Indian roads, high-performance engines, higher seating capacities, and price points that are similar to the mid-size and executive category of sedans.”

Although car makers are more enthusiastic about launching diesel variants in the SUV segment, this category will also see the steepest increase in cost. While the rise in costs for petrol variants of compact cars and SUVs will be between 3 and 5 percent, it is the larger diesel vehicles that will see a minimum of an 8 to 10 percent increase in price. So, a vehicle that costs ₹10 lakh now, could cost at least ₹80,000 more.

“The cost of upgrading a BS IV petrol car to a BS VI-compliant petrol engine costs between ₹8,000 and ₹12,000. However, there are several other reasons for higher cost of ownership for new car buyers,” says the Maruti spokesperson. “The cost of car acquisition has gone up substantially for several reasons, including implementation of new safety norms. The decision by some states to raise road tax, coupled with the implementation of the three-year insurance scheme in line with the Supreme Court guidelines have made cars expensive.”

The cost of BS VI fuel is also expected to be higher than BS IV fuel. In February, Sanjiv Singh, chairman of Indian Oil Corporation (IOC), the country’s largest oil supplier, had said there will “definitely be a marginal increase in retail prices of fuels” once the BS VI norms are implemented. However, he had added that the rise will not be a steep one.

The reason for this increase in price is the cost of investments that oil refining and marketing companies have had to make in the refining and distribution processes.

The main objective of moving towards BS VI emission standards is to reduce the level of sulphur in the fuel, which requires changing its physical and chemical components. Oil and gas companies, therefore, need to modify the refining and blending processes to produce fuel of the required composition. To manage costs and prices, they need to optimise their processes, as well as forecast market demand.

The Indian automobile industry has had one of its worst years in 2019, with passenger vehicles sales falling by 17.98 percent between April and November, according to Siam. The slump can be attributed to multiple reasons, including the slowdown in the overall economy, the crisis in the non-banking finance companies sector, a liquidity crunch, and the increase in third-party insurance and road tax in some states.

This slowdown in the world’s fourth-largest auto market has also severely affected employment, with tens of thousands of workers losing their jobs at manufacturing plants and ancillary units. Media reports indicated that till August 2019, 40,000 to 50,000 contract workers in the auto hubs of Gurugram and Manesar in Haryana had been laid off. Similar situations were expected in other manufacturing hubs like Chakan, near Pune, and in Chennai.

Globally, too, the auto industry is slowing faster than expected and, according to the International Monetary Fund, it represented 20 percent of GDP slowdown in 2018 and about 30 percent of the year’s drop in global trade. The declines come as wealthier countries reach maximum automobile saturation, while developing countries struggle with lagging sales.

Given these factors, the Indian industry had been pinning its hopes of a revival in the new financial year with the launch of new models that are expected to interest consumers. For instance, Kia Motors India in March announced that it had registered its highest-ever monthly sales of 15,644 units in February; it sold 14,024 units of the Seltos, and 1,620 units of the newly launched Carnival. But despite this optimism among some players, there is caution.

Menon of SIAM says it is too early to say what the effect of the increased BS VI vehicle and fuel prices will be on sales figures and consumer sentiments. “Where SUVs are concerned, however, the new norms would not be a determinant of demand, and new car models have been generating some excitement,” he says. “However, we should keep in mind that India is a very price-sensitive market.”