Coronavirus shut down the 'experience economy'. Can it come back?

With most large-scale gatherings on hold for the foreseeable future, the dearth of live events is already taking a psychological toll, not only on those in the industry but on society at large 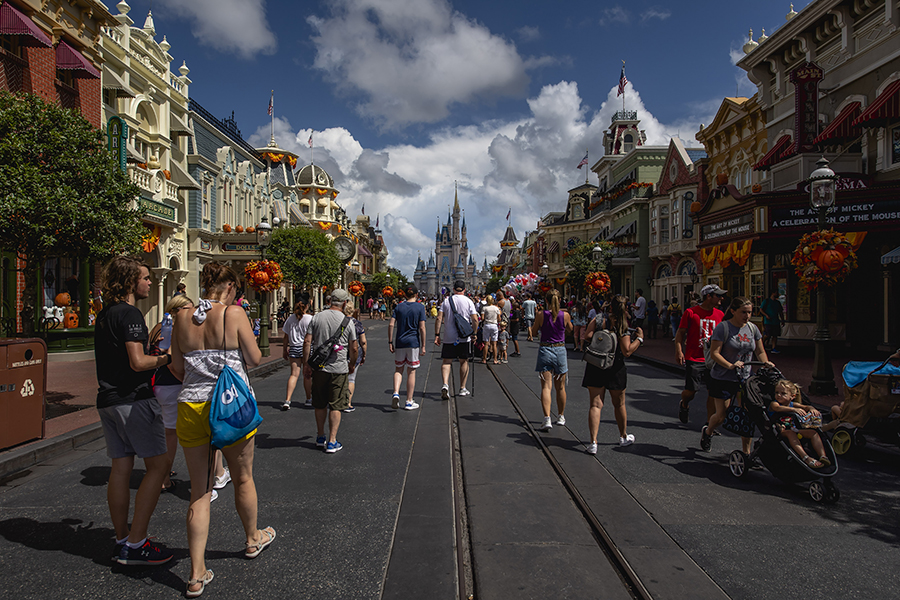 Park-goers at Walt Disney World in Lake Buena Vista, Fla., Sept. 1, 2019. Large-scale events are on hold for the foreseeable future. That is taking a toll on the live events industry and society at large. (Johnny Milano/The New York Times)

(News Analysis) A quandary is lurking at the heart of the efforts to revive the economy. In recent decades, a growing share of job growth and gross domestic product has come from the business of getting people together — from college sports and music festivals like Coachella to ax-throwing bars and ice cream museums. Yet given the infectious nature of the coronavirus, these very events will be among the very last to return. “Any place people want to gather is a place no one wants to be right now,” said Joe Pine, a co-author of “The Experience Economy.” That bleak truth has profound implications for businesses large and small. And with most large-scale gatherings on hold for the foreseeable future, the dearth of live events is already taking a psychological toll, not only on those in the industry but on society at large. “Human contact is really what our business is built on,” said Roland Swenson, chief executive of South by Southwest, the music, film and technology festival in Austin, Texas, which was canceled in March. “If that is lost, then the world will be a poorer place.” The economy’s reliance on live events has been growing for years. When Disneyland opened in 1955, it sparked a boom in the theme park business. In recent decades, the Wizarding World of Harry Potter, Great Wolf Lodge water parks and more have emerged to compete for the attention — and money — of American families. As live sports became lucrative television properties, leagues like the WNBA and Major League Soccer were born, expensive stadiums with state-of-the-art amenities were built and the sheer number of games grew. When the record business faltered, concerts became the profit centers for musical acts. Many media companies found that hosting conferences was more profitable than publishing magazines. Lately, escape rooms and pop-up experiences like the Color Factory and Candytopia have proliferated. Even the boom in restaurants was about atmospherics as much as it was about food. Starbucks succeeded by creating not just a latte with a nice profit margin but a place outside the home and office where people wanted to linger. “Surround coffee with an experience and you can charge $5 a cup,” Pine said. The economic output associated with such diversions has ballooned. GDP attributable to arts, entertainment, recreation, accommodations and food services was nearly $1.6 trillion last year, up from $979 billion a decade ago, according to the Bureau of Economic Analysis. All those new experiences created jobs, and over the same period, employment in the leisure and hospitality industries grew about 30%, reaching a high of nearly 17 million early this year, according to the Bureau of Labor Statistics. As the domestic manufacturing industry waned, the businesses involved in bringing large groups of people together became ever more important to employment. And it was more than just hot dog vendors and parking lot attendants and security guards. Whole fields sprang up to support the business of live events, giving rise to a legion of event planners, lighting specialists and startups like Eventbrite, the online ticketing platform. There was even a new senior-level job at some corporations: head of experiences. Yet it turns out that an economy that depends on gathering is especially vulnerable to disruption by a virus. In the last two months, the number of people employed in the leisure and hospitality industries has been roughly halved, accounting for about one-quarter of the staggering job losses. Movie theaters, sports venues and the vast majority of tourist attractions remain closed, and many may not open for months. Gov. Gavin Newsom of California suggested that fans might not be able to attend games in person until there is a vaccine, a breakthrough that isn’t expected until next year at the earliest. “It’s difficult to imagine a stadium that’s filled until we have immunity and until we have a vaccine,” Newsom said. “There are conditions that persist in this state and this nation that make reopening very, very challenging.” If his assessment is correct, that’s bad news for Major League Baseball ($10.7 billion in revenue last year), the NBA (about $8 billion in annual revenue) and the NFL ($15 billion or more in annual revenue). Beyond the immediate hardships created by sweeping job losses and stagnant businesses, the standstill in gatherings is already having a deeper impact on the national psyche. The business of events, however commercial it might be, is also central to our identities. Getting together for birthday parties at Chuck E. Cheese and bachelor parties at football games is how we make meaningful memories and define ourselves. “If you go to the World Cup or a rock concert, it’s not just a commercial transaction,” said Priya Parker, author of “The Art of Gathering.” “It’s also an expression of identity.” Those in the events industry are left wondering what the future will hold. Catherine Powell, head of experiences at Airbnb and a former Disney executive who oversaw theme parks, expressed optimism that when it was safe to gather again, the crowds would return. “When lockdown lifts, there will be an incredible pent-up demand to want to connect,” she said. There are early signs that might be true. Disney reopened its theme park in Shanghai recently, and quickly sold out of tickets. Yet admission was sharply limited to promote social distancing, and health precautions were ubiquitous. In Orlando, Florida, Disney and Universal are reopening some of their shopping areas, albeit with social distancing measures, a mask requirement and mandatory temperature checks at Universal. As a result, the theme parks — once bustling profit engines for some of the biggest corporations — will be making a small fraction of the money they normally would, and the virus will never be far from visitors’ minds. “From a travel industry and hospitality perspective, it will take a long time for things to return to normal,” Powell said. “If they ever return to normal.”

Tweets by @forbes_india
Is a pandemic the right time to start a business? It just might be
Dr. Pratayaksha Bhardwaj holds the key to healthy Weight Loss