As schools across the country scramble to move classes online, remote learning, which has otherwise seen slow adoption in traditional classrooms, will get a jumpstart 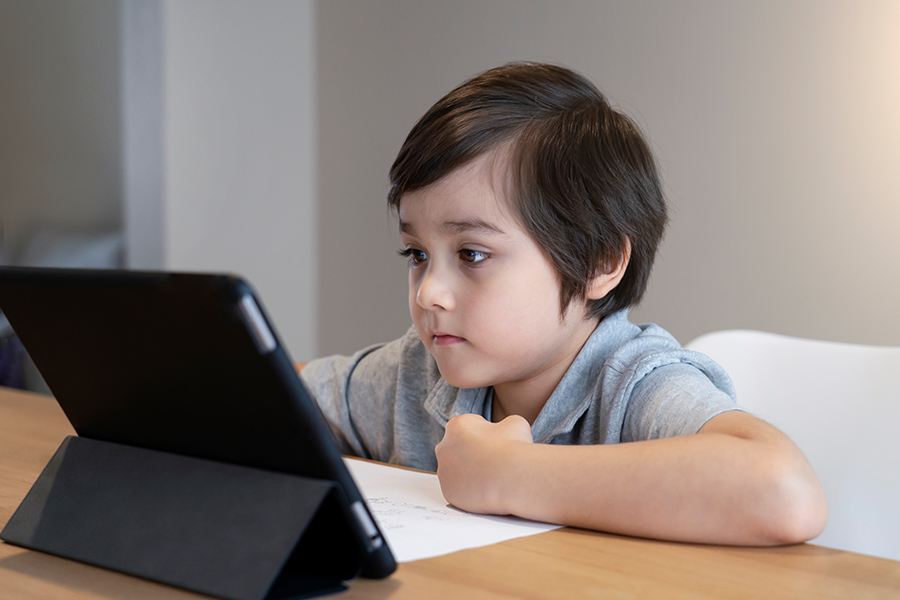 Image: Shutterstock
Every morning, Myrah Reshamwala settles down on the chestnut desk in her parents’ room, erects her mother’s iPad in front of her and taps her way into virtual classroom. A fresh lesson awaits her, as do some YouTube links posted by her teacher to reinforce the topic being taught.

Her mother Jyoti sits beside her. After all, Myrah is just five years old and needs help understanding the lesson at hand, posted on Classroom—an app developed by Google that lets teachers post videos and assignments, and chat with their students.

Myrah attends the Cathedral and John Connon School in Mumbai. Like schools across the country, it shuttered in mid-March, following a government directive to contain the spread of the new coronavirus. Millions of students have been affected by the school closures, but for many, like Myrah, the learning hasn’t stopped.

What’s remarkable is the speed at which schools were able to make the switch from offline to online. Cathedral, for instance, closed its doors on Thursday, March 13, and by Monday, March 17, the first online lessons were rolled out. “We’ve been using Google Classroom for about four years now,” says Sharmila Lele, headmistress of the infant section of the school. “But that was mainly for reinforcement.” To prepare for complete online instruction—as opposed to a blended kind—the teachers worked through the weekend, altering lesson plans and tweaking assignments. Since live sessions with the teacher on platforms like Zoom are unproductive for the very young, Cathedral requested parents to take on the role of makeshift teachers.

“It took me a couple of days to get the hang of it,” says Jyoti. “We’re not teachers. We can’t do as good a job as a trained teacher would do... but the school has given guidelines which are helpful.” This includes detailed notes on how to teach the topic at hand, what questions to ask the child and how to prompt her if she’s confused.

Myrah puts in about two hours of work every day, says Jyoti. Subjects covered include English, Mathematics, Environmental Studies, Hindi and even Yoga. The children have 10-minute sessions of the latter three times a week. Here too, the teacher provides detailed notes on what asana to practice, how long to hold the stretch for and when to deep breathe.

Anushka Reshamwala (unrelated to Myrah), on the other hand, studies in class nine of the same school and has a more rigorous schedule. Every weekday, she has four one hour-long live classes on Zoom starting at 9 am and wrapping up at 1.30 pm. She gets a 30-minute break in between. Teachers start off their classes by marking attendance. It’s as intense as school,” says Anushka, adding that she isn’t allowed to lounge about on a bed and take classes. She has to be seated on a desk and access the lessons on a laptop or tablet, not a smartphone.

So what are the differences?

“I’m able to concentrate more online,” says Anushka, counter intuitively. “That’s because everyone is muted and only the teacher speaks. If you have a question, you unmute yourself and speak.” Assignments are posted on the Classroom app. She works through them, clicks pictures of the completed work and uploads it on the app on the due date. Teachers revert with comments and corrections. “Communication is also pretty seamless,” she says, referring to chat feature on the app that allows students to freely connect with their teachers.

But she misses the camaraderie that a school setting offers. “You get to meet your friends, chat about stuff... all that isn’t there online. It can feel isolating.”

To encourage a sense of community, Cathedral plans to organise live Zoom meet-ups for its infant section. Myrah, for instance, is scheduled to meet up with her classmates via the app next week. “It will be fun seeing all my friends,” she smiles.

“We’re aware that this can feel isolating,” says Lele. “Especially for young kids who’ve just about started school. So once we resume school—whenever that maybe—we will put in place lots of group activities, games and so on to make the kids feel that they are part of a class.”

Online instruction may never replace in-person learning, but how effective is it as a mode of instruction? “The teachers are very proactive,” says Jyoti. “One piece of homework Myrah did was incorrect, so we had to redo it and upload it again.” She adds, “It’s a fair substitute for the real thing, given the situation.”

“I’m able to keep up with my school work,” says Ruhika Bhende, matter-of-factly. She studies in class 6 of JBCN International, a school in Mumbai’s Parel area that also implemented online classes in response to the lockdown. Her mom Rima chimes in, “The school is doing a good job and at least the kids are gainfully occupied. Otherwise they get bored sitting at home all day.”

Ruhika has online school from 8 am to noon with two 30-minute breaks in between. She also pursues gymnastics outside of school, competing at the international level. Her coach now conducts an hour-long session on Zoom every evening. Despite the number of hours Ruhika ends up spending on screen every day, her mother is unperturbed. “It is what it is at the moment... besides technology is not all bad. There’s good to it too. This way Ruhika ends up having a full day,” she says.

At most schools Forbes India spoke to, the teachers had some prior experience in using online tools to reinforce concepts or assign homework. But switching to a fully online mode of instruction was challenging at first, says one teacher from RN Podar School in suburban Mumbai, who spoke on condition of anonymity. “We’re teachers, not actors. Looking into a camera and teaching on Zoom is not something everyone is comfortable doing,” she says. So some have opted to just show their PowerPoint presentations on the screen as they speak to their class. “We’ve found ways around it,” she says.

An unfortunate reality brought to light by this crisis is the deep digital divide that exists between children from different schools. While the more affluent schools are tech savvy, others have fallen behind in getting online, says Ashish Rajpal, founder and CEO of XSeed. His company provides middle-income schools following the ICSE and CBSE syllabi, with step-by-step lesson plans for teachers and students.

Several schools XSeed works with had vacations coming up when the closures were announced, so they just broke for the holidays early, says Rajpal. Other more enterprising schools have “tried to do something” on their websites or on Zoom, but without much success. That’s because of several factors. For one, the children don’t own devices with which they can access classes online—laptops and tablets are a luxury they can’t afford. “There’s only so much you can do on your father’s smartphone,” says Rajpal. Second, even if they have devices, patchy internet connectivity is an issue. “Not all kids have the same kind of access to the web, sadly,” he says. Third, space is a constraint. Children from these backgrounds often share small rooms with their parents or live in noisy joint families.

Given these constraints, XSEED is working on some online modules and teacher training programmes to help these schools. “It will be a combination of utility, quality and sustainability. I can’t divulge much now, but in a month or so we should have something ready,” says Rajpal.

Over the long term, schools that are presently experimenting with online learning—in whatever capacity—will be more inclined to take it up more seriously once the crisis passes. “There’s no doubt that going forward schools will look to offer blended learning programmes,” says Anindya Mallick, partner, Deloitte India, who focuses on education and skill development. Edtech platforms also stand to benefit, he adds. Consider, Byju’s. When the school closures were announced, the Tencent-backed unicorn decided to open up its platform to students for free. It has since seen a 60 percent increase in the number of new students using the app to learn from home on a daily basis, says co-founder Divya Gokulnath. Unacademy, another Bengaluru-based edtech platform that offers live classes and mock tests for those preparing for examinations like IIT-JEE, has also gained. It opened up their platform to institutions for free to help them through this period of upheaval. 500-600 K-12 schools are using the platform, says Gaurav Munjal, co-founder and CEO. “B2B is not what we do, but we’ll do what it takes to help institutions tide through this.” As a happy byproduct of the crisis, the shift to online education will happen much quicker, he believes. “Things were anyway moving online, but what would have taken two years earlier, will now take a month.”

In the near term, with extracurricular activities like gymnastics and dance classes moving online, students can at the very least, dance like nobody’s watching.

Tweets by @forbes_india
2 keys that will unlock mass adoption of cryptocurrency and blockchain in 2020
Photos: A lockdown, and a long journey home