Mark Zuckerberg, Facebook's chief executive, told workers during a staff meeting that was livestreamed on his Facebook page that within a decade, as many as half of the company's more than 48,000 employees would work from home 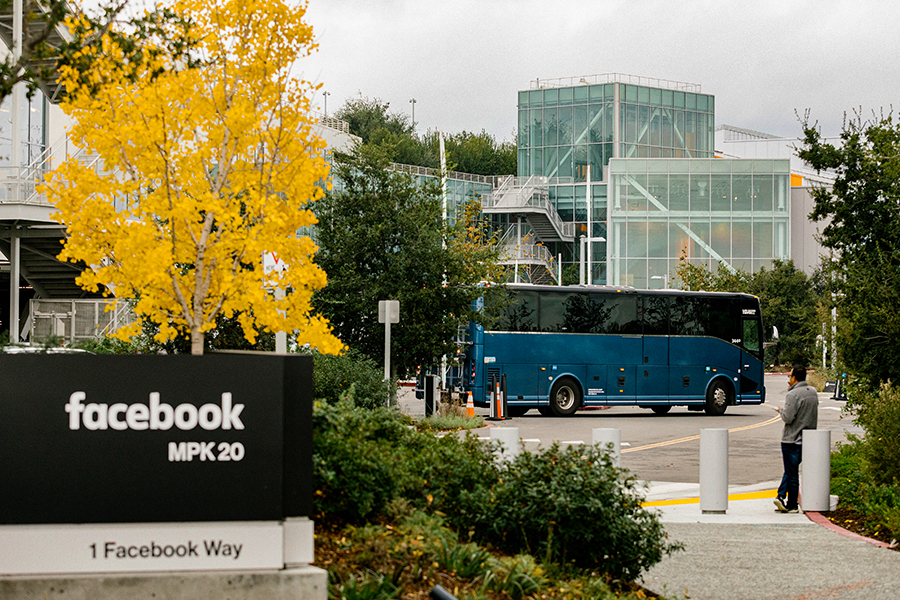 FILE - The Facebook campus in Menlo Park, Calif., Dec. 5, 2019. Facebook said on Thursday that it would allow many employees to work from home permanently, but there’s a catch: They may not be able to keep their big Silicon Valley salaries in more affordable parts of the country.
Image: Jason Henry/The New York Times

OAKLAND, Calif. — Facebook said Thursday that it would allow many employees to work from home permanently. But there’s a catch: They may not be able to keep their big Silicon Valley salaries in more affordable parts of the country.

Mark Zuckerberg, Facebook’s chief executive, told workers during a staff meeting that was livestreamed on his Facebook page that within a decade as many as half of the company’s more than 48,000 employees would work from home.

“It’s clear that COVID has changed a lot about our lives, and that certainly includes the way that most of us work,” Zuckerberg said. “Coming out of this period, I expect that remote work is going to be a growing trend as well.”

Facebook’s decision, the first among tech’s biggest companies, is a stark change for a business culture built around getting workers into giant offices and keeping them there. Using free shuttle buses, free cafeterias and personal services like dry cleaning, tech companies have done as much as possible over the years to give employees little reason to go home, let alone avoid the office.

If other giant companies follow suit, tech employment could start to shift away from expensive hubs like Silicon Valley, Seattle and New York. The option to work from home could also provide more reason for tech workers who complain that their enviable salaries still aren’t enough to buy a home in San Francisco or San Jose to consider settling in other parts of the country.

Zuckerberg’s announcement followed similar decisions at Twitter and the payments company Square, both led by Jack Dorsey. Dorsey said last week that employees at his companies would be allowed to work from home indefinitely. At Google, employees have been told they can work from home through the end of the year, but the company has not made any indications about permanent plans.

There are signs that remote work is popular among technologists. After Dorsey’s announcement, Google searches for “Twitter jobs” spiked, according to Google Trends.

Aaron Levie, the chief executive of the business technology company Box, wrote on Twitter that “the push happening around remote work is as game-changing for the future of tech as the launch of the iPhone” more than a decade ago.

Tech executives have long believed that person-to-person communication was a big part of the creativity that went into generating popular products. They built giant campuses that reflected that belief, from the ornate offices of Apple, Google and Facebook in Silicon Valley to the new Amazon headquarters in Seattle.

Still, the biggest tech companies were trying to expand beyond their main offices before the pandemic, as an older generation of companies like Intel had done. Amazon, for example, intends to open a second headquarters in Virginia. The coronavirus pandemic could accelerate those plans.

“Before the virus happened, a lot of the discussion about the tech sector was about how to bring people to work sites and create affordable housing,” said Robert Silverman, a professor of urban and regional planning at the State University of New York at Buffalo. “This is kind of a natural progression.”

An employee exodus from the biggest urban tech hubs, combined with layoffs, could have dramatic local impacts. Housing costs in the Bay Area, for example, have fallen since the pandemic began, according to the rental firm Zumper. Rents in San Francisco fell 7% in April, and were down 15% in Menlo Park, Facebook’s home.

Zuckerberg long worried that employees who worked remotely would lose productivity. Facebook once provided cash bonuses to employees who lived within 10 miles of its headquarters. In 2018, Facebook expanded its main campus with elaborate new offices designed by Frank Gehry, including a 3.6-acre roof garden with more than 200 trees.

Just last year, Facebook started moving into a 43-story office tower that it had leased in San Francisco, and the company is still reportedly in talks for a significant office expansion in New York, as well.

In March, the coronavirus lockdown forced companies to send employees home. Many tech companies, including Facebook, emptied their offices before local shelter-in-place orders.

Now, more than two months later, executives are discovering that their remote workers performed better than expected. Zuckerberg said employees remained focused even though they were working from home.

Facebook will begin by allowing new hires who are senior engineers to work remotely, and then allow current employees to apply for permission to work from home if they have positive performance reviews.

Starting in January, Facebook’s employee compensation will be adjusted based on the cost of living in the locations where workers choose to live. Facebook will make sure employees are honest about their location by checking where they log in to internal systems from, he said.

Zuckerberg said the shift could offer more benefits than inconveniences for the company. Allowing remote work will allow Facebook to broaden its recruitment, retain valuable employees, reduce the climate impact caused by commutes and expand the diversity of its work force, Zuckerberg said.

So far, Facebook, Square and Twitter are being far more aggressive than their counterparts in the industry. Their work is mostly done in software code, which can be handled remotely.

At Apple, on the other hand, many employees are hardware engineers who need to be in the company’s lab, particularly because of the company’s secrecy around its products. Tim Cook, Apple’s chief executive, said in April that the company’s main office in Silicon Valley would be closed until at least June and has not updated that timeline.

Startups could also find it difficult to manage a remote work force. Allowing workers to live in the Midwest could keep costs down, but Silicon Valley has a giant talent pool from which startups draw their workers. Also, many venture capitalists, mostly based in Silicon Valley and San Francisco, expect the companies they invest in to be based nearby.

At Los Angeles-based Snap, the maker of Snapchat, employees are allowed to work at home through September. Evan Spiegel, Snap’s chief executive, said in an interview that he was reassessing the situation regularly and considering guidance from health authorities about when to reopen.

“People want certainty, and there’s a huge amount of pressure as a leader to make definitive statements,” Spiegel said on Wednesday. “I think it’s important that we remain flexible in a situation that is changing rapidly.”