Georgia, other US states start reopening. No one is sure what happens next

The lockdown happened overnight, but reopening will be gradual at best--it might be months, maybe years, before Americans squeeze into bars or subway cars like they used to before the pandemic struck 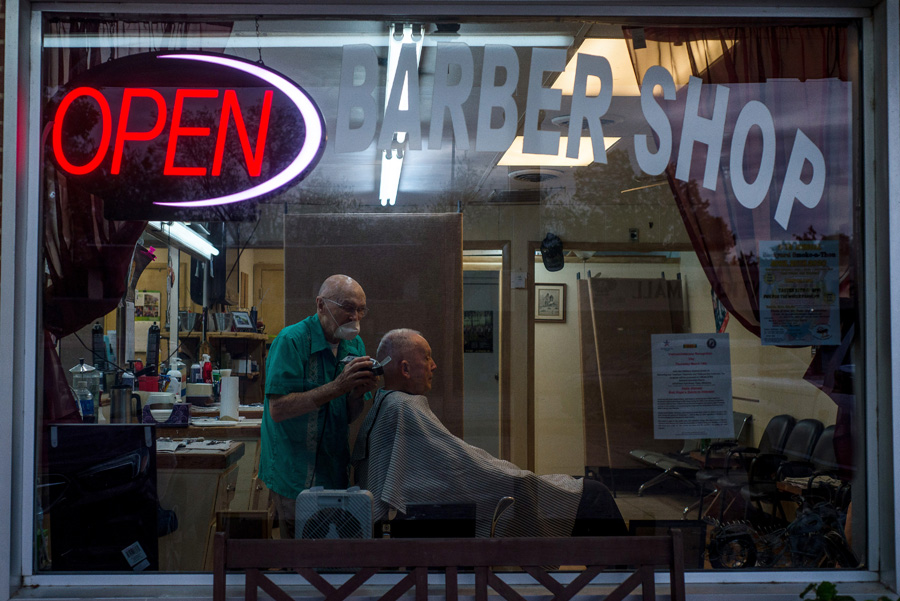 A barber in Broken Arrow, Okla., cuts a customer's hair on Friday, April 24, 2020, the first day he could reopen during the coronavirus pandemic. The state began partial reopening of businesses on Friday, which included barber shops, hair and nail salons and pet groomers. (Joseph Rushmore/The New York Times)

The economy shut down almost overnight. It won’t start back up that way.

Politicians and public health experts have sparred for weeks over when, and under what circumstances, to allow businesses to reopen and Americans to emerge from their homes. But another question could prove just as thorny — how?

Because the restart will be gradual, with certain places and industries opening earlier than others, it will by definition be complicated. The U.S. economy is a complex web of supply chains whose dynamics don’t necessarily align neatly with epidemiologists’ recommendations.

Georgia and other states are beginning the reopening process. But even under the most optimistic estimates, it will be months, and possibly years, before Americans again crowd into bars and squeeze onto subway cars the way they did before the pandemic struck.

“It’s going to take much longer to thaw the economy than it took to freeze it,” said Diane Swonk, chief economist for accounting firm Grant Thornton.

And it isn’t clear what, exactly, it means to gradually restart a system with as many interlocking pieces as the U.S. economy. How can one factory reopen when its suppliers remain shuttered? How can parents return to work when schools are still closed? How can older people return when there is still no effective treatment or vaccine? What is the government’s role in helping private businesses that may initially need to operate at a fraction of their normal capacity?

South Carolina, for example, looks likely to be among the first states to allow widespread reopening of businesses. But if a manufacturer there depends on a part made in Ohio, where the virus is still spreading, it may not be able to resume production, regardless of the rules.

“We live in an economy where there are lots of interconnections between different sectors,” said Joseph S. Vavra, an economist at the University of Chicago. “Saying you want to reopen gradually is more easily said than done.”

The White House released a plan this month for a phased reopening of the economy, with restrictions easing as states meet public health bench marks. States have begun to develop their own road maps. Gov. Andrew Cuomo of New York said Tuesday that parts of the state that had fewer coronavirus cases might be allowed to reopen more quickly than New York City and other hard-hit areas.

But those proposals are mostly rough schematics, leaving unanswered crucial questions about how the process will play out at the ground level. Those details may help determine whether the economy will bounce back relatively quickly once the pandemic ebbs or if the U.S. will face a slow, painful turnaround, as it did after the last recession.

Then there is the public health threat: If states reopen their economies too quickly, or without the right precautions in place, that could lead to a renewed outbreak, with dire consequences for both safety and the economy.

“The biggest risk is that you open too fast, too broadly, and you have another round of infections, a second wave,” said Mark Zandi, chief economist for Moody’s Analytics. “That’s the fodder for an economic depression. That would just completely undermine confidence.”

Partial reopening may not work for everyone.

In the early phases of reopening, businesses will almost certainly be required to operate at reduced capacity to allow for greater social distancing. That will require changes for virtually all companies, but in many cases it won’t present insurmountable hurdles.

Offices, for example, might operate in rotating shifts, with different departments coming in on different days and deep cleanings performed in between. In factories, production lines could be redesigned to allow more distance between workers and to reduce or eliminate contact between teams.

But other businesses could have a much harder time adapting. Most restaurants, for example, have tight profit margins even in the best of times. Operating at half capacity — or less — will mean losing money for many restaurants.

“It’s impossible in the restaurant business to be profitable at a 50% revenue clip,” said Alex Smith, president of the Atlas Restaurant Group, which operates upscale establishments in Baltimore, Houston and other cities.

The public debate has focused on government mandates: When should city and state shutdown orders be lifted? But just because businesses are allowed to reopen doesn’t mean that they will or, if they do, that customers will return.

Data from OpenTable, the restaurant reservation service, shows that people largely stopped eating out even before governors and mayors recommended doing so, and well before official shutdown orders took effect. Evidence from Sweden and other countries that have avoided formal lockdowns likewise shows that people have sharply reduced their activities even without government mandates.

But economists say the government’s role is only beginning. Businesses will need help weathering a period of reduced sales. State and local governments will need help, too, or they will have to cut programs to offset a sharp drop in tax revenue. Individuals will need unemployment benefits, food assistance and other aid to make ends meet in a recession that will almost certainly outlast the pandemic.

The scope of those problems isn’t yet clear. No one knows how many businesses have failed permanently, rather than shut down temporarily, or how many laid-off workers will be able to return to their old jobs. But the longer the shutdown lasts, the more permanent the damage will be, and the slower the rebound.

Elizabeth Ananat, a Barnard College economist who studies poverty and inequality, said she worried that government support would again dry up before the economy was ready to sustain itself, prolonging the downturn and hurting lower-income families, who are typically the last to benefit from a recovery.

“In some ways, I’m even more anxious about the reopening than I am about the shutdown,” she said.

Tweets by @forbes_india
With Covid-19 lockdown, people with disabilities find their way back into the workforce
Touch Dolls: The Latest Sensation in Fast Fashion