India now has the third-highest total cases — 1,003,832 cases and 25,602 deaths — after the United States and Brazil. Researchers at the Massachusetts Institute of Technology estimate that by the end of next year, India will be the worst-hit country in the world 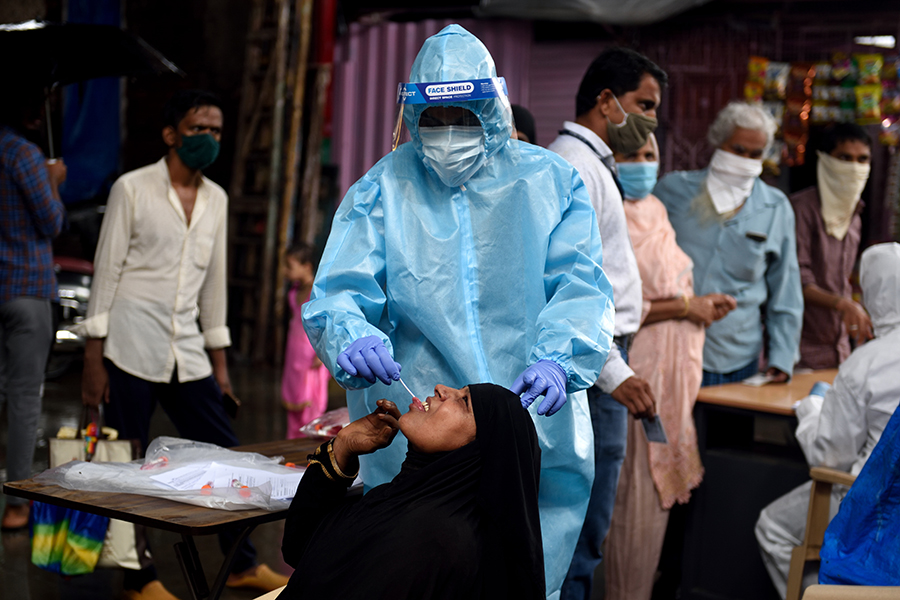 NEW DELHI — India hit a milestone Friday morning that it had made great sacrifices to avoid: recording more than 1 million coronavirus infections.

The virus has been gnawing its way across this country of 1.3 billion people and gaining speed, fueled by high population density, an already beleaguered health care system and a calculation by the central government to lift a nationwide lockdown in hopes of getting the economy up and running, come what may.

But as India’s number of confirmed new infections keeps hitting record highs, many states and cities have been locking down again. In some areas, long lines of bodies snake out of cremation grounds. India is racking up about 30,000 new reported infections each day — more than any other country except the United States and Brazil, and it is catching up to Brazil.

India now has the third-highest total cases — 1,003,832 cases and 25,602 deaths — after the United States and Brazil. Researchers at the Massachusetts Institute of Technology estimate that by the end of next year, India will be the worst-hit country in the world.

“We have paid a price for laxity,” said K. Srinath Reddy, president of the Public Health Foundation of India, a nonprofit organization of public health experts and academics.

About 25,000 deaths have been officially attributed to COVID-19, but testing remains sparse, so the real figure could be significantly higher.

Schools and universities have been shut since March with no clear plans to reopen, leaving nearly 278 million students without much to do.

More than 100 million Indians have lost their jobs. The economy, which already had been showing deep cracks before the pandemic, is now forecast to contract by as much as 9.5% in the year that began April 1, a stunning reversal from the last decade, when India was one of the most promising business environments on Earth.

In the early days of the pandemic, Prime Minister Narendra Modi took swift action. He advised masks and social distancing. At a time when India had fewer than 1,000 known infections — although the true figure was certainly higher — he imposed a severe nationwide lockdown that would last nearly three months.

Millions of migrant laborers, who over the years had gravitated to jobs in the cities, suddenly found themselves with little or no work. They poured out of the cities and back into the countryside, hoping to rely on relatives in their home villages to survive. In the process, they spread coronavirus infections into nearly every corner of India.

Public health experts say Modi got it backward and should have waited until the crisis was further along and then imposed a strict lockdown.

The early lockdown was “premature and it did nothing” because the virus hadn’t spread at the time, said Dr. Anand Krishnan, a professor of epidemiology at the New Delhi-based All India Institute of Medical Sciences. “Now is the time to impose such drastic public health measures.”The worst hit areas are India’s biggest cities, like Mumbai, New Delhi, Chennai, Ahmedabad and the tech hub of Bengaluru. The crowded urban areas, where many families live eight or even 10 people per room, make social distancing nearly impossible, hastening the spread of the highly contagious coronavirus.

Officials in India’s northeastern state of Bihar imposed a two-week lockdown beginning Thursday after a sudden spike in cases — more than 20,000 in 24 hours. Bihar is a source of migrant labor across India; the surge in Bihar’s cases correlates with the return of workers from distant cities.

A sharp rise in cases has also forced a new lockdown in Goa, a state on India’s western coast that is famed for its beaches, just a few weeks after it reopened to tourists, a lifeline to the state economy.

The southern state of Kerala, which had been largely successful in controlling the spread of the virus, also extended lockdown restrictions by a week in its biggest city, Thiruvananthapuram, after cases nearly doubled in just a few days.

“We need more focus on the new COVID-19 hot spot in South Asia,” said a statement from John Fleming, an official with the International Federation of Red Cross and Red Crescent Societies. “Lives of people in India are no less valuable than people in other parts of the world.”

Modi and top government officials have repeatedly said in televised speeches that India is doing better than richer countries, especially when it comes to the death rate. India has reported about 20 coronavirus-related deaths per million people, while many other nations, including the United States, Brazil, Spain, Italy, have all lost hundreds per million.

“I don’t think it has anything to do with how the government has handled the pandemic,” Krishnan said. Instead, he said, it’s because India’s average age is younger than that of other countries, and obesity and diabetes, which increase people’s vulnerability to the virus, are less prevalent here.

The Indian Medical Association, said that COVID-19 had killed 99 doctors.

“If COVID mortality has to be lessened, it has to start with doctors,” the organization said in a news release Wednesday.

Public health experts say India still lacks a transparent and robust mechanism to respond to a crisis of this magnitude. And what’s needed, they say, is a vigorous and energetic response from both the government and citizens.

“Opening malls and allowing large religious gatherings is not the way,” said Reddy. “You can’t give the virus a highway to travel.”