The effect of the two-month halt in operations has been colossal, even for top designers such as Sabyasachi and Tarun Tahiliani. Where does that leave the country's otherwise burgeoning bridal designers who thrive on multiday wedding celebrations, bridal trousseaus and generous budgets? 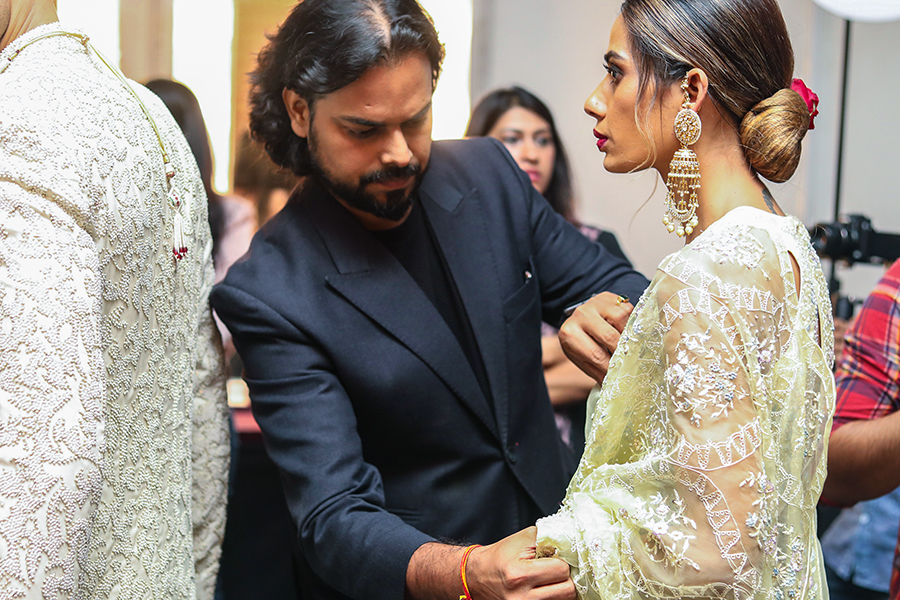 When Indian fashion designer Sabyasachi Mukherjee debuted his fine jewelry at Bergdorf Goodman in January, he had big plans for promoting his collection. But the coronavirus outbreak forced him and the luxury department-store chain to make some big adjustments.

Social-distancing rules in New York, for example, meant browsing at the Fifth Avenue store had to be relegated to the outside entrance instead of inside the plush jewelry salon for a soon-to-be-engaged couple. And Mukherjee couldn’t talk about his work in person. His appearance came via a video call in early June from his home in Kolkata, India.

“The launch pop-up had to be cut short because of the pandemic,” he said. “But it was surreal to see wedding jewelry being sold on the sidewalk of Fifth Avenue!”

New Delhi-based designer Tarun Tahiliani also has had to conduct business in a different way. He had his first Zoom fitting in June with a braide from Hyderabad, who after postponing her extravagant April wedding, opted for an intimate ceremony at home.

This has been the new normal for the Indian wedding industry, known for its lavish affairs that can last for days, with many rituals and wardrobe changes. The industry is estimated at $50 billion, according to KPMG, second only to the United States, with about 10 million to 12 million weddings typically taking place in India each year.

Of course, there won’t be as many weddings this year. The pandemic has already wiped out the spring and summer wedding season.

When a nationwide lockdown in India was announced on March 24, some couples postponed their weddings indefinitely, while others decided to have small home weddings instead. India’s peak wedding and festive season, which is September to March, doesn’t look promising either, as the current government mandate only allows for a maximum of 50 people at a wedding function — a fraction of the typical guest list that runs into substantial three-digit counts.

Restrictions are being slowly lifted and design houses are cautiously reopening stores and production units, but the effect of the two-month halt in operations has been colossal.

Where does that leave the country’s otherwise burgeoning bridal designers who thrive on multiday wedding celebrations, bridal trousseaus and generous budgets? For most, 2020 is a write-off.

“We proactively shut down all production and stores even before the official lockdown — it meant going from 100 percent capacity to zero percent in a matter of days,” said Mukherjee, who dresses about 4,500 brides a year, with prices per bridal outfit ranging from $2,500 to $23,000. We are anticipating a significant reduction in volume for the rest of the year.”

For Rahul Mishra, the first Indian designer to showcase at Paris Haute Couture Week, the decline in orders started at the end of February, especially from his Indian brides in Europe. Anita Dongre, who is known for her practical bridal lehengas, which retail for $1,000 to $10,000, had zero bookings in March and April. However, she is beginning to see an increase in inquiries.

Something Old
The hunt for that dream wedding outfit — running your fingers over the gilded embroidery, twirling in front of the mirror during trials and shedding a happy tear when you find “the one" — is a sacrosanct ritual for the Indian bride. Touching and feeling are the very essence of this world. Flagship stores are designed for the tactile experience as meticulously as the handcrafted collections they house. Every turn is a sensory treat, not mere window dressing, but a stage for a rite of passage to unfold.

“The in-store experience will be even more valued after the pandemic,” said Mukherjee, who plans to open his flagship New York store next year. “Consumer expectations for beautiful, experiential retail stores will continue to rise.”

Tahiliani also feels that this luxury need not go away. He believes a circumspect approach, with strict adherence to hygiene, safety and an appointments-only policy will do the trick. “The lightness of our bridal pieces defines our brand,” he said. “It’s the bulk of what we stand for. A client cannot gauge the weight of the garment until they try it on. One just cannot duplicate that experience.”

Something New
In July 2016, Mukherjee had skipped the traditional runway shows in favor of showing his collection on social media. So he is no stranger to using his Instagram page as a pseudo-storefront, particularly for his overseas clientele (one-third of his business comes from the United States). The brand is now encouraging the same purchasing pathway in India during the pandemic, complemented by partnerships with select online stores. “Technology and e-commerce will play an increasingly important role in the luxury bridalwear segment,” he said. “But not as a replacement for the in-store experience, rather as an adjunct to it.”

Other designers, however, are placing more serious bets on their online presence as the way forward. Brands have hastened the start of their e-shops, a need made more urgent in the face of waning opportunities to draw prospective brides to stores. Payal Singhal, a Mumbai-based bridal designer, has had to cancel her summer pop-ups and trunk shows in London, Los Angeles, New York, New Jersey and Vancouver, British Columbia. “The virtual experience is going to be more important than ever before,” she said. “In 2013, we were one of the first Indian brands to launch an e-commerce platform. We have revamped the front- and back-end, and introduced more products lines during this lockdown. New pieces are now being uploaded every week.”

Mishra, whose e-store opened on July 7 to coincide with his couture fall 2020-21 release, is emphasizing emotional storytelling to make up for the absence of the original tactile experience. This includes documenting production processes and capturing the journey of a design that could eventually become someone’s wedding outfit. “We are also working with interactive communication tools like intricate illustrations and imagery to highlight those minute aspects of a garment that can otherwise be missed when you’re looking at it through a screen,” he added.

Dongre and Tahiliani both say that brides have adapted to online shopping and virtual consultations with relative ease. “People in India are not used to buying expensive things online, unless there is a proper customer interface with a couture team or certain store managers,” Tahiliani said. “Our sales team has quickly adapted to this need of the hour.”

The Next Chapter
Most labels have two bridal collections a year, with seven to 75 designs in each line. But the last half of 2020 will be different. The plan for many is to reintroduce Spring-Summer ’20 collections that did not receive the usual spotlight they might have had.

Dongre and Mukherjee will stick to their made-to-measure model, but probably require longer lead time. That’s not to say that bespoke will be relegated to bottom-drawer status. Mishra predicts shoppers being more enthusiastic about artisanal value, seeking their own customization.

Tahiliani’s bridalwear is divided into ready-to-wear and couture. For the latter, he showcases 10 to 12 samples annually along with archival swatches and panels, all of which can be fully customized. With weddings trending smaller, he said, he is confident brides will choose more subtle looks over blingy ones.

“We can now give brides more refined thread work and exquisite detailing that can be appreciated up close rather than under the harsh lights of banquet halls where bigger weddings usually took place,” he said. “So, I expect our couture to be much finer than ever before.”

The Legacy of Craft
The Indian textile and apparel industry employs 45 million people directly and 60 million indirectly, making it the country’s second largest employment-generator after agriculture. Karigars (or craftsmen) at the grassroots level are the backbone of this business — handmade and labor-intensive bridalwear is heavily dependent on their specialized skills in Indigenous crafts.

But faced with the current crisis, scores of migrant workers have chosen to return to their villages, leaving ateliers with skeletal staff to fill orders. Tahiliani’s in-house workforce of 500 has been reduced to less than half its strength, so he is now organizing new centers in rural sectors with his old craftsmen. This decentralization of operations has allowed Mishra to resume production with 70% of his team (he says he employs about 1,000 artisans directly or indirectly). The designer championed “reverse migration” six years ago, urging his embroiderers to move back to their villages, while still working with them continually. “We now employ many such craft clusters around the country, which consist of communities working from their homes in their villages,” he said.

The Shift
Some in the industry say there may be a shift in Indian celebrations.

“Weddings might just go back to what they were meant to be — more sober and toned-down, which will have a different symbolism than the great big fat Indian wedding,” Tahiliani said. “The luxury clothing sector will be affected more than we can imagine, and fashion must readjust its outlook. This is not the time for frothy celebrations.”