This library has 100,000 books. But also 3D printers, sewing machines, a recording studio

At the Helsinki Central Library Oodi, there are over 100,000 books. But there is also much, much more than that, making it a blueprint for community spaces of the future 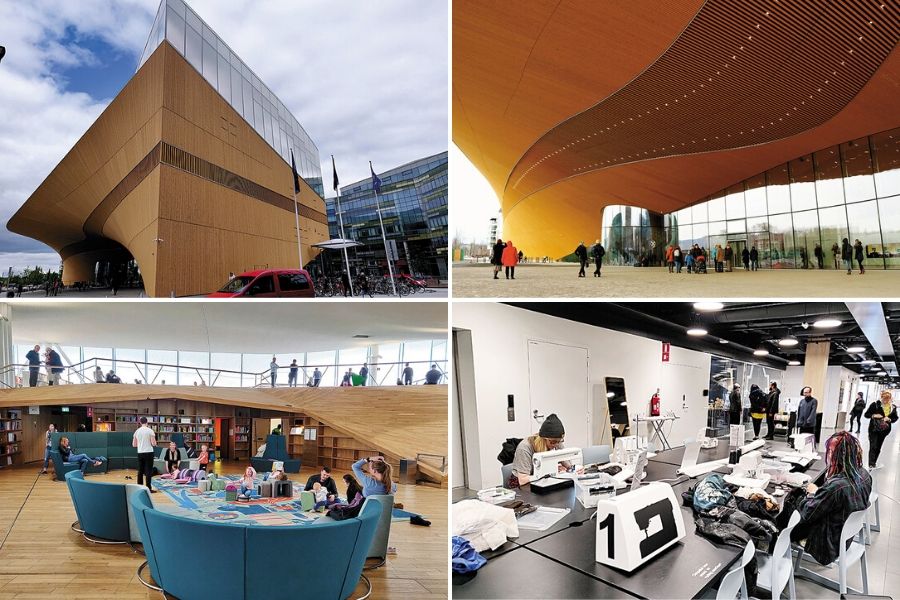 One of the main structural ideas behind Oodi was that the enclosed building should be an indoor extension of outdoor public space
Images: Shutterstock

This is supposed to be a library. What are sewing machines doing here? And 3D printers? Is that a recording studio in there, where a couple of young men are jamming on their guitars? And what is with these living, breathing trees? This foyer to park baby strollers and that colourful floor mat for kids to jump on? I am told there are free language classes and tickets available for basketball games. And where are the books? At the Helsinki Central Library Oodi, there are over 100,000 books. But there is also much, much more than that. Standing on the top level of the library, it is easy to see why Finland has been named the happiest country in the world, for the third year in a row this March. Oodi—as it is popularly called—stretches out in front of me as 185,000 sq ft as a complete package of information, recreation and gainful employment. Opened to public in December 2018 to mark a century of Finnish independence, it is one of the 37 branches of Helsinki Central Library. In the very first month of its existence, nearly 420,000 people (that is two-thirds of Helsinki’s 650,000 residents) went to Oodi, if only to just check it out or take refuge from the frigid weather outside. And in one year, the library received 3 million visitors from all over the world, many like me drawn by curiosity.

The World Happiness Report, which has voted Finland as the happiest country since 2018, measures a wide range of social parameters such as annual income, life expectancy, availability of public services, freedom from oppression, trust in government, and so on. When I visit Oodi, it is a midsummer day and the sun is shining fiercely, as it will until way after midnight. The skies are of a bright powdery blue, parks are ablaze with yellows and oranges and pinks, children are jumping into public swimming pools with glee, people are going about their work with a smile. Why would the Finns, also among the most literate in the world, not be the happiest? Oodi stands right opposite the Parliament building, across the Kansalaistori square, flanked by other cultural landmarks such as the Helsinki Music Centre and the Museum of Contemporary Art Kiasma. The location is a deliberate choice to signify the symbiotic relationship between the government and the governed. Designed by Finnish architecture firm ALA, Oodi took shape over 10 years, and involved collaboration with, and suggestions from, the public: From comments on the six shortlisted architecture plans displayed in public spaces (chosen from among 544 entries), to suggestions on what the new library should offer. 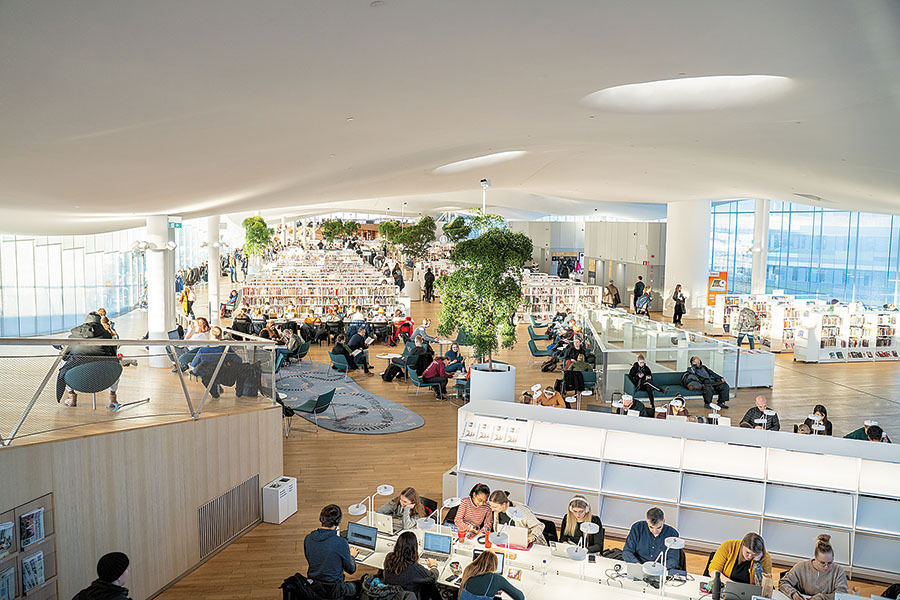 The different spaces in the library flow easily into one another, separated only by the function they fulfil
Image: Shutterstock The façade is all glass and wood of mostly local origin, with the structure tapering at one end to resemble a ship’s prow. The interiors are open and sprawling, with 10,000 patrons trooping in every day. There appears to be enough space for everyone, either as open areas for work and play, or private nooks to nestle in with a book. One of the main architectural ideas behind Oodi was that the enclosed building should be an indoor extension of outdoor public space. And the ground floor does feel like a town square, with the National Audiovisual Institute’s movie theatre, several concert venues, and a restaurant that spills out into the open air during warmer months. The second level has meeting rooms, virtual reality game kiosks, music recording studios, 3D printers and a wide array of work tools that can be borrowed for personal use. And then there are the reading corners: Cosy spaces that invite visitors to curl up and just take a nap if they so choose. Unlike most public libraries, there are few rules inside Oodi, with one of their principles declaring “idle hanging out is allowed, even encouraged”. For me, though, the highlight of Oodi is the top floor, the space that has fondly come to be known as “book heaven”. A striking spiral staircase leads to row after row of clean white shelves stacked with books, and interspersed with olive trees. There is sunlight streaming in from large floor-to-ceiling windows that overlook central Helsinki. Plush sofas, reading tables and chairs are scattered about conveniently for people to lounge on with their books or digital devices. And at the very end of the commodious room, a few broad steps that double as seats, lead up to the kids’ area. There, mothers read to their children, while a surprising number of toddlers run around. There are young couples engrossed in board games. And then there are those who seem to have come just for coffee and conversation at the corner café. The different areas in the library are not strictly demarcated, the spaces flowing easily into one another and separated only by the function they fulfil. Public libraries across the world are increasingly becoming more than just silent book sanctuaries where even the gentlest whispering is frowned upon. Classic beauties such as the New York Public Library and Dublin’s Trinity College Library are still revered by locals and tourists alike for their grand architecture and formidable collection of books and documents. But in countries like the UK, old libraries are grappling to stay relevant and even afloat, by repurposing themselves as community hubs offering vocational training courses, language classes and space for events. The newer ones have their focus turned to friendly design and community co-option. Calgary Central Library in Calgary, Canada, and Qatar National Library in Doha, Qatar, are two recent examples, housing gaming pods and recording kiosks, robotised book delivery systems and temporary exhibitions within their walls. Helsinki Central Library Oodi has incorporated all this and more in its blueprint, while delivering its promise of being “Helsinki’s living room”. Oodi is the Finnish word for ode. Indeed, this library is an ode to many things the Finnish society prides itself for: Clean and modern design, empowerment of citizens, and free access to knowledge.