A startup of ex-Googlers is reinventing the telephone 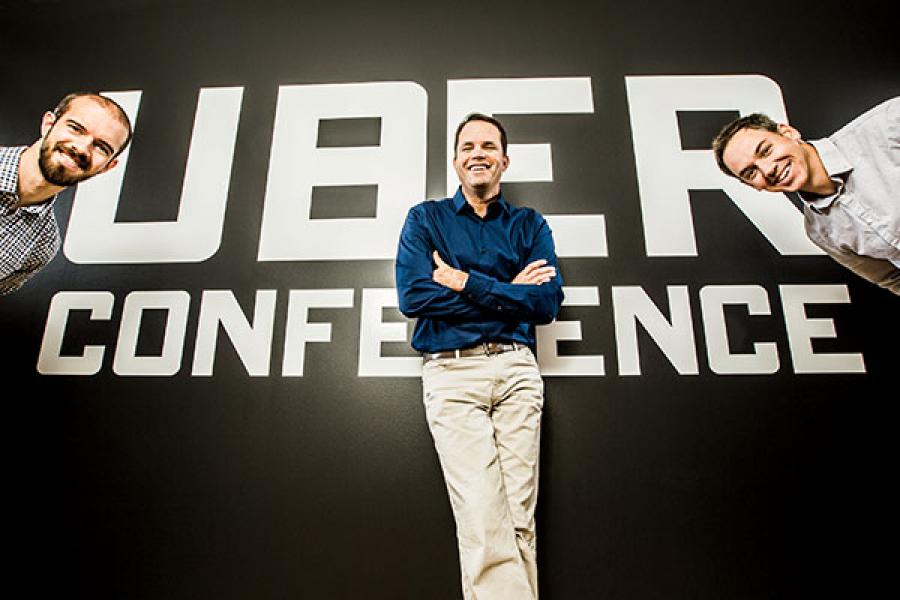 For two years Craig Walker got a lot of puzzled looks about his chosen line of work: Selling voice-conferencing software. Few technologies are as mundane and ridiculed as the conference call. It is hardly the kind of Big Idea one would expect from the entrepreneur who ran a company that pioneered phone dialing for a web browser (DialPad, which Yahoo bought and turned into Yahoo Voice) and in 2006 created the first one-number-that-rings-everywhere-at-once service (GrandCentral, which Google bought and turned into Google Voice).

Walker’s three-year-old company, Switch Communications, has done fairly well with UberConference, a simple, PIN-free cloud service. It’s coming up on 1 billion call minutes so far and grosses nearly $1 million per month from customers paying $10 a month for the premium version. But UberConference was never Walker’s real objective, just merely a step on the way to destroying the sleepy, bloated market for business phone service. “Conference calling was the low-hanging fruit, because it sucks. But as the next-gen provider of voice solutions, there’s no limit unless the world runs out of phone numbers,” says Walker, 49.

This month Walker introduced his company’s big play, a service called Switch that replaces workers’ desk phones and numbers with an app that works across whichever devices they want. If your boss calls your number, you can take it on your cellphone while walking from your car and then transfer it to your PC-connected headset at your desk. And when Switch connects to Google Apps it pulls in whatever data the apps have on the caller, such as emails, calendar meetings and shared files.

This was Walker’s plan all along, and his investors Andreessen Horowitz and Google Ventures are betting he can carve out a big piece of the $75 billion spent each year on internet voice and unified communica- tions (many times bigger than the $4 billion conferencing market). Switch investor Marc Andreessen calls the company a two-stage rocket: “The first stage gets it up in the air, and the second stage gets it in orbit.” As fuel, Switch Communications raised $15 million in 2012, valuing it at an estimated $60 million before it saw a dime of revenue. It’s likely worth four or five times that now.

Switch is at the forefront of a new crop of companies such as Grasshopper, RingCentral, Twilio and gUnify that are using the cloud to replace legacy telephone hardware, starting with “private branch exchanges,” or PBX systems, from Cisco and Avaya that oﬃces stick in a closet to route their calls. Switch charges about $15 per person per month, as much as 40 percent less than what IT managers have been paying for years, says telephony expert Phil Edholm. And by operating its servers out of data centres around the globe, Switch claims its call quality is just as good as the most expensive option.

“The world is changing and moving to the cloud,” says Walker. “There has to be a system and products around that new reality.” Switch on its own is a disruptive force, but Walker has calculated he can gain a far wider market by working with his old colleagues at Google to make voice a significant feature in the latter’s plans to take on Microsoft. Google’s suite of business apps (Gmail, Drive, Hangouts, Docs) got oﬀ to a slow start but is now a serious Oﬃce rival, with over $1 billion in revenue, 5 million business customers and 5,000 more signing up every day.

Google uses UberConference, for example, to allow dozens of employees to call into a Google Hangouts video-conference by phone after the video service reaches its 15-person maximum. Sprint just announced a major integration with UberConference that will bring the service to its Google Apps for Work business customers. Just using UberConference instead of traditional phone conferencing will save the Weather Channel $30,000 this year. A recent convert to Google Apps, the TV channel, with its 1,500 employees, could soon be a much bigger account, testing Switch as a replacement for one of the major telecom giants.

Switch’s close connection to Google is its strength—so close, in fact, that the new service’s first paying customer thought it was a Google product. The customer, Alejandro de Castro’s food-delivery service in Los Angeles, was moving to a bigger oﬃce and needed a phone system. The CEO discovered Switch through a tweet and was able to enroll his startup, Summerland, in minutes. “They had a two-week free trial oﬀer, and I said, ‘I want to start paying for it now.’ ” Big businesses are interested, too. Trials last longer for them, so Switch can’t name names just yet. But early testers include a big streaming-media compa- ny and two national furniture chains.

Switch has its detractors, especially among the host of video-conferencing startups that believe video, not voice, is the collaboration medium of the future. “I guess there’s a case where a group call is okay for a status check,” says Krish Ramakrishnan, CEO of Blue Jeans Network, a rival conferencing service. “But for group collaboration, you need video to see what you’re working on.”

Gartner analyst Steve Blood says Switch’s margins could prove tough to maintain as it navigates a network of middlemen who bridge calls from one service to another. Microsoft is said to be readying a revitalised Skype for Work for next year, and some traditional telcos like Verizon now want in on the action, Blood says.

Walker’s challenge will be in controlling his own destiny. If voice features become key selling points to counter Microsoft, Google might just acquire Switch the way it bought Walker’s last company—except this time it will be for a lot more money.

“It makes no sense to duplicate what Craig already has,” says one of Switch’s early investors, Wesley Chan, a former partner at Google Ventures.

Walker doesn’t relish going back into Google: It just doesn’t sound as much fun at his age. As the market develops, his plan is to sign as many Google-style deals as he can with big players such as Salesforce, SAP and even Microsoft: “We want to be the company leading the charge of turning communications into software. That would make us a massive, stand-alone business.”